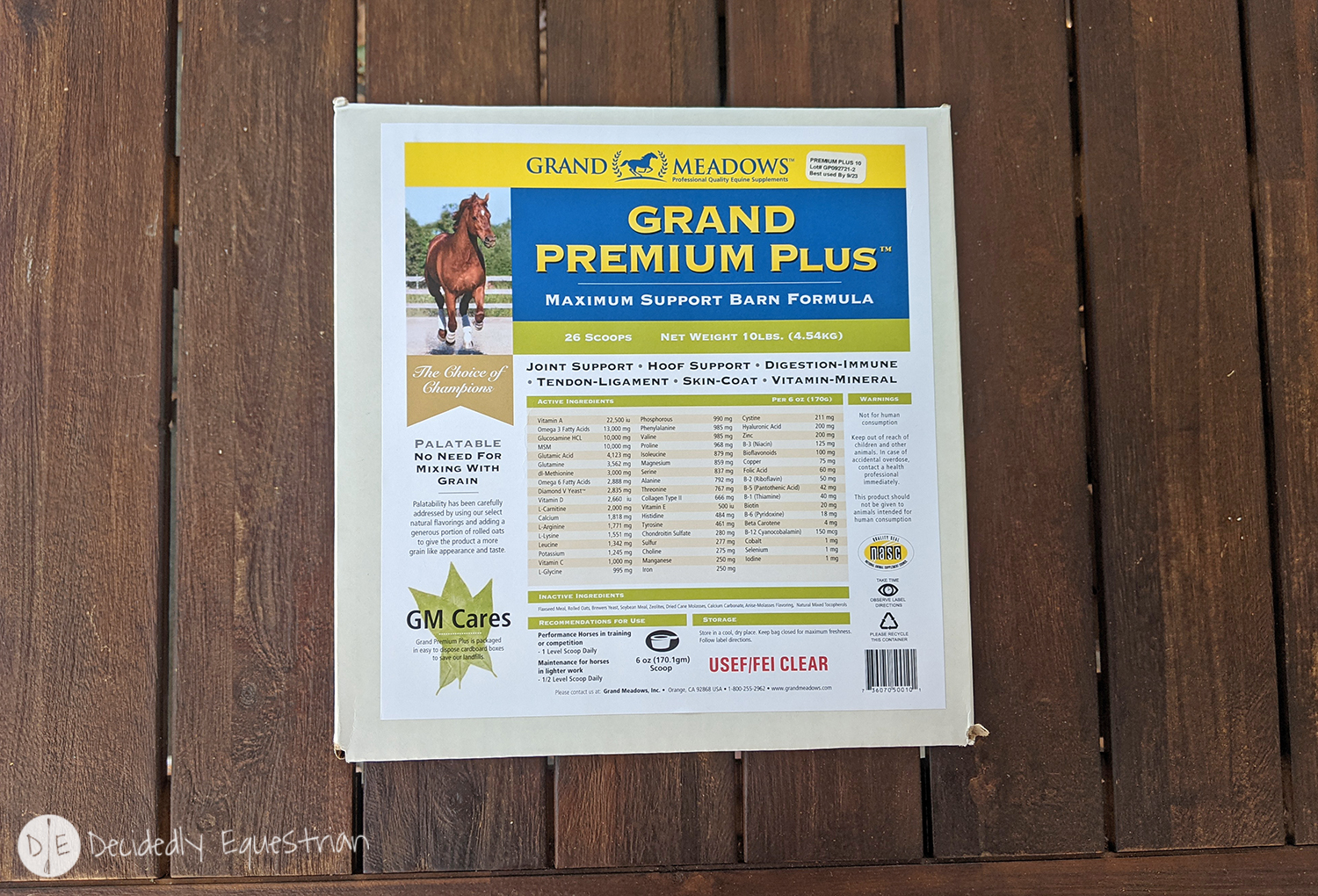 Before I dive into it, I do want to let you know there’s a coupon you can use for 10% off your order and flat rate shipping on all Grand Meadows products (yup…even on heavy boxes of supplement).  Use code: RMASE

Nick from Grand Meadows sent me the Grand Premium Plus supplement to check out at the same time as the magical NANOFLEX (which is currently my ride or die…because it keeps me from being in pain every day).  Check that review out if you want to know what I’m talking about.

ANYWAYS…Nick sent me the Grand Premium Plus and it for sure fell by the wayside in terms of excitement vs. the NANOFLEX…  I used up the whole box he sent and ordered a big 25lb box to keep trying it so that I had a full understanding of what this product does.  I will note that before I put him on the Grand Premium Plus, Jax wasn’t getting much in terms of supplements.  He got some stable mix, some alfalfa pellets, grass and alfalfa hay, rice bran pellets, electrolytes, Magnesium and some Daily Gold.  He had at some point in the past been on some joint stuff, but his owner stopped buying it.  I’m not a nutritionist and supplements intimidate me a little bit, so I just threw in some electrolytes, Daily Gold (because I heard it was good) and extra magnesium because he was having some muscle issues (I figure it helps my issues, so it should help his).  Jax gets supplements 4-5 days a week (when I’m there or his owner is there) and that has worked fine since he’s not in super heavy work or anything.  He’s always needed quite a lot of food to maintain weight, but not excessive amounts for a horse his size (9 flakes a day, plus the baggie of supplements, plus a bucket of stable mix at lunch). 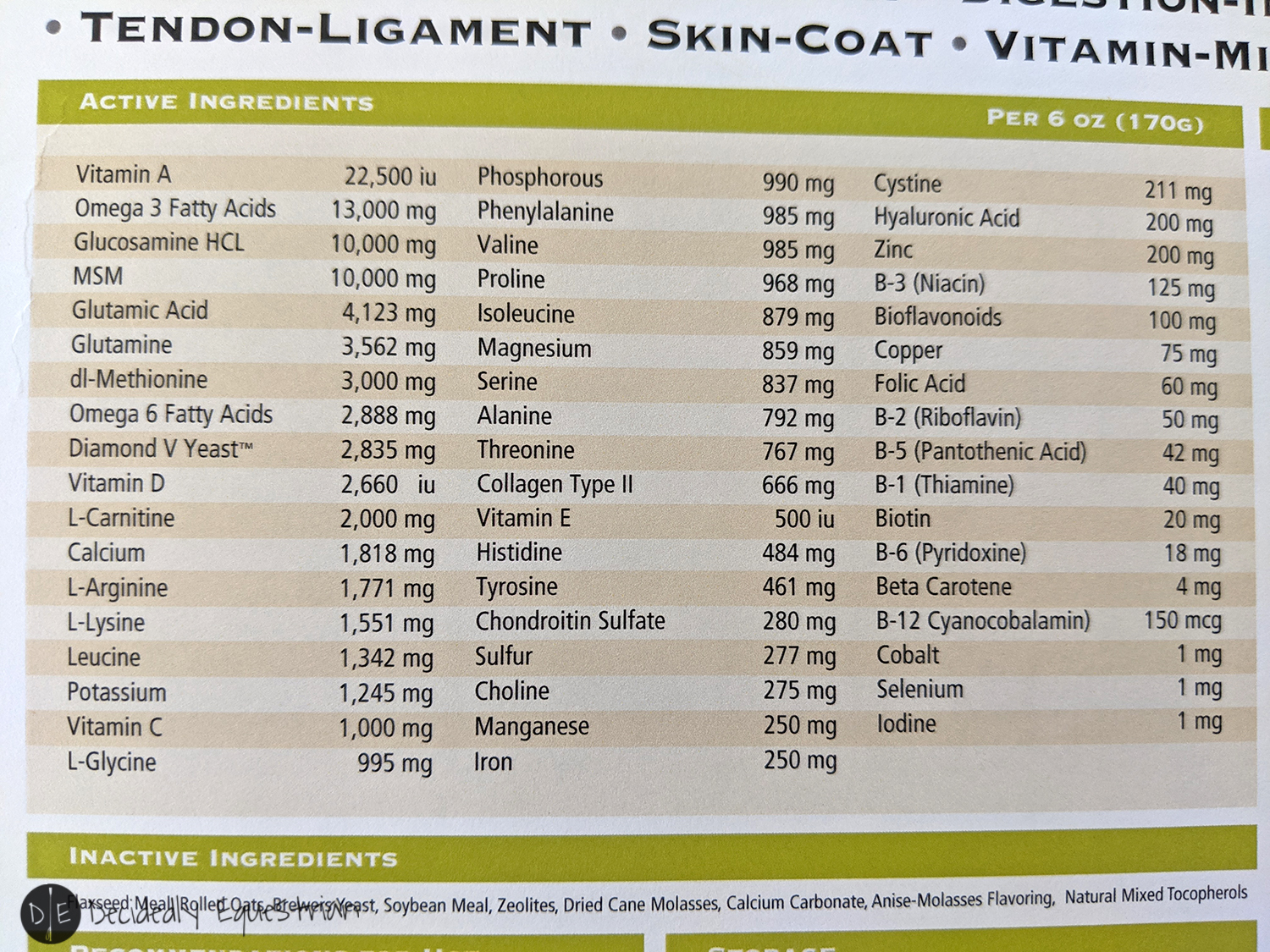 So the Grand Premium Plus has EVERYTHING in it…so some rethinking of his food was necessary.  I dropped all the supplements from his grain baggie and just did the Grand Premium Plus with a handful of alfalfa pellets and a handful of rice bran and waited to see.   I have sense added back in a quarter dose of the magnesium, because he seems to need the extra support and dropped the alfalfa pellets and rice bran.  I’ll get into why on that in a minute. 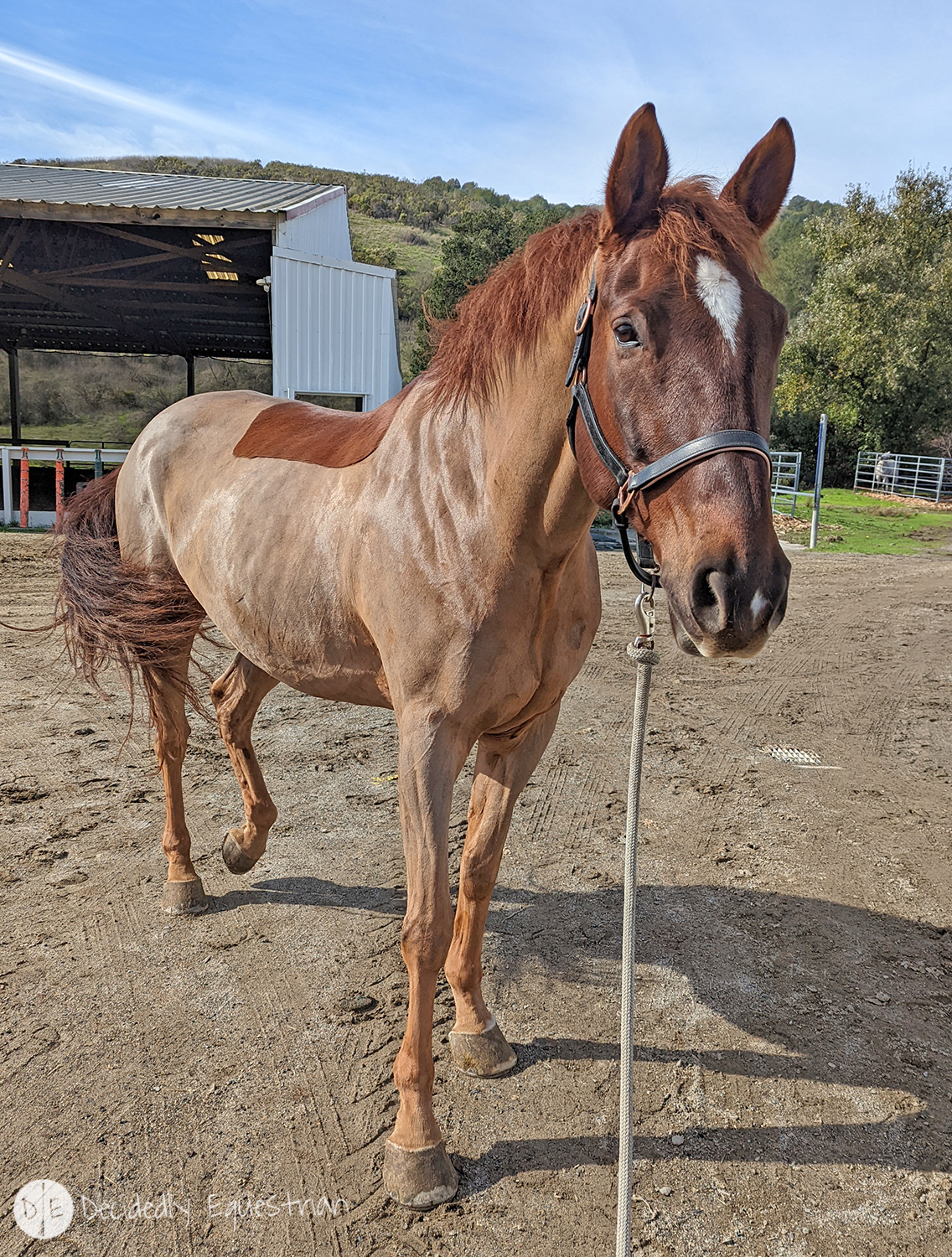 A few weeks after going on Grand Premium Plus (Early November). Shiny and looking great even after a clip. Notice his weight. You can see some ribs. No major fat deposits…

The immediate results (two weeks) were to his skin.  Jax is a stereotypical redhead with very sensitive and dry skin.  He gets itchy very easy on his dock, mane, and armpits/elbows.  I put cream on his elbows every ride which helps some, but he always ends up with gross, flaking itchy skin there anyways.  I waited to use this for several weeks before clipping…because clipping is usually a mess with him (and makes him SO sensitive).  Within a few weeks of using this product, those dry elbow patches were gone and his skin looked wonderful! 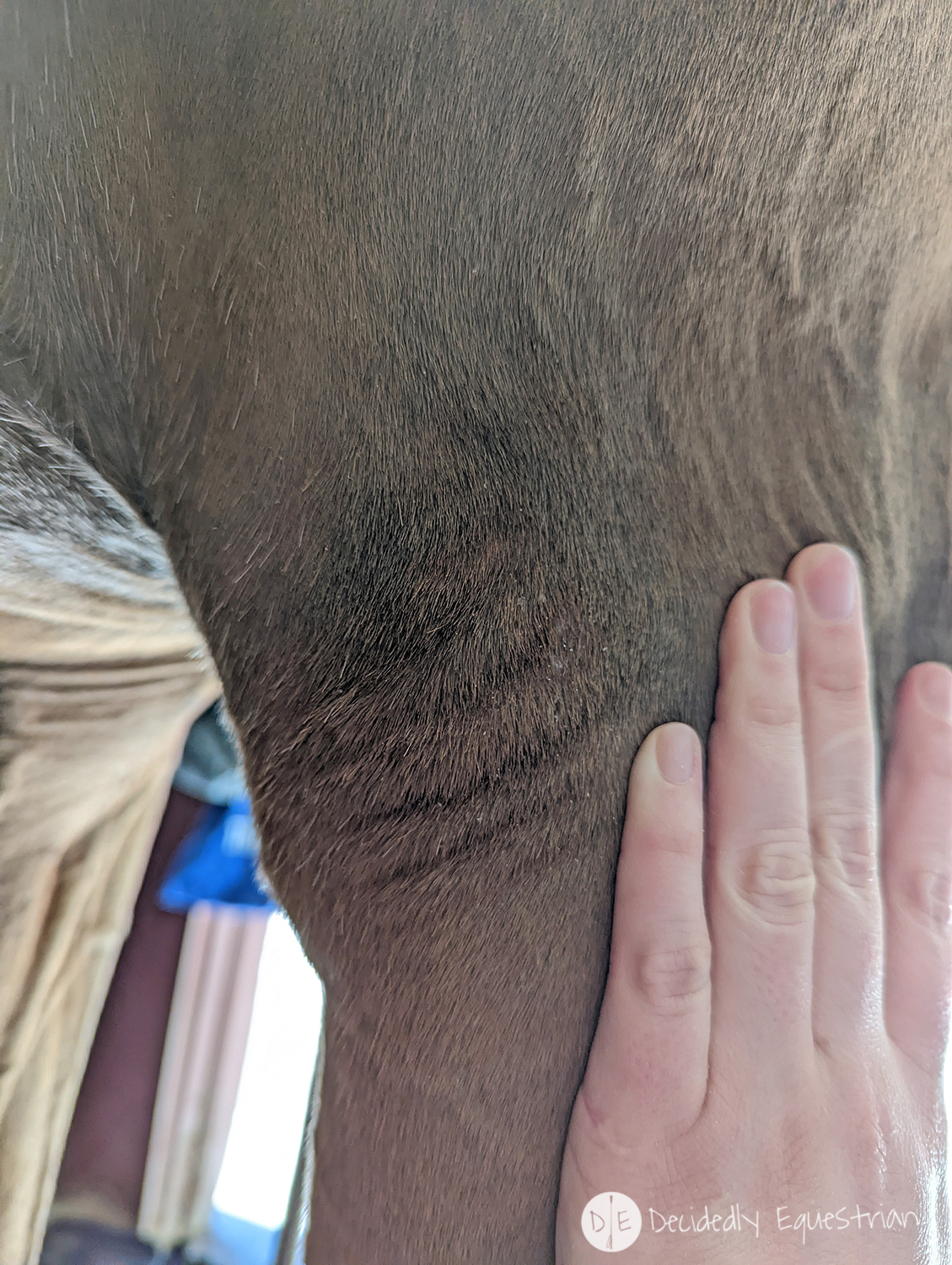 The rest of his skin looks great!  He’s been significantly less itchy.  Less dry flakes and dander.  His coat looks shiny and beautiful (even when I’m lazy and don’t brush him…in no-bath winter).  And he even has some dapples that have persisted which isn’t typical.  So that’s wonderful…but does that really warrant spending a big chunk of change every month on a new supplement?  Well no…but…onwards…there’s more. 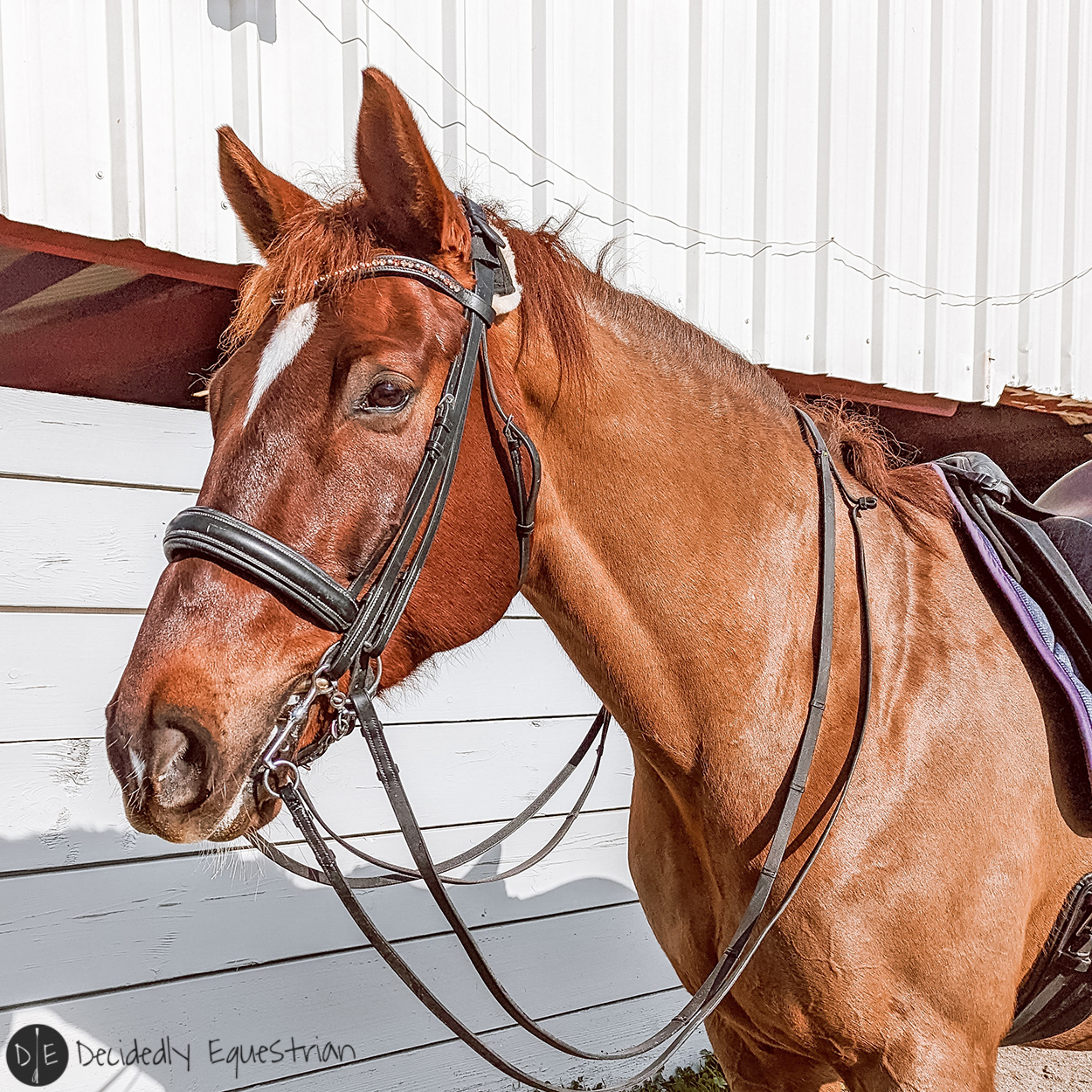 A lot of things we feed are long term support right?  Joint supplements don’t work right away.  Jax can’t talk to me and tell me if his muscles or fitness is feeling better.  If his stomach is feeling good.  It’s a slow series of observations.  Until all of a sudden you realize…you horse has gotten a tiny bit fat.  Yup.  Jax…who’d always been bordering on thin more often than not for his size was a chunk!  He looks like one of those Chinese horse sculptures with the big fat bodies and tiny little heads…and he certainly does NOT have a tiny head. 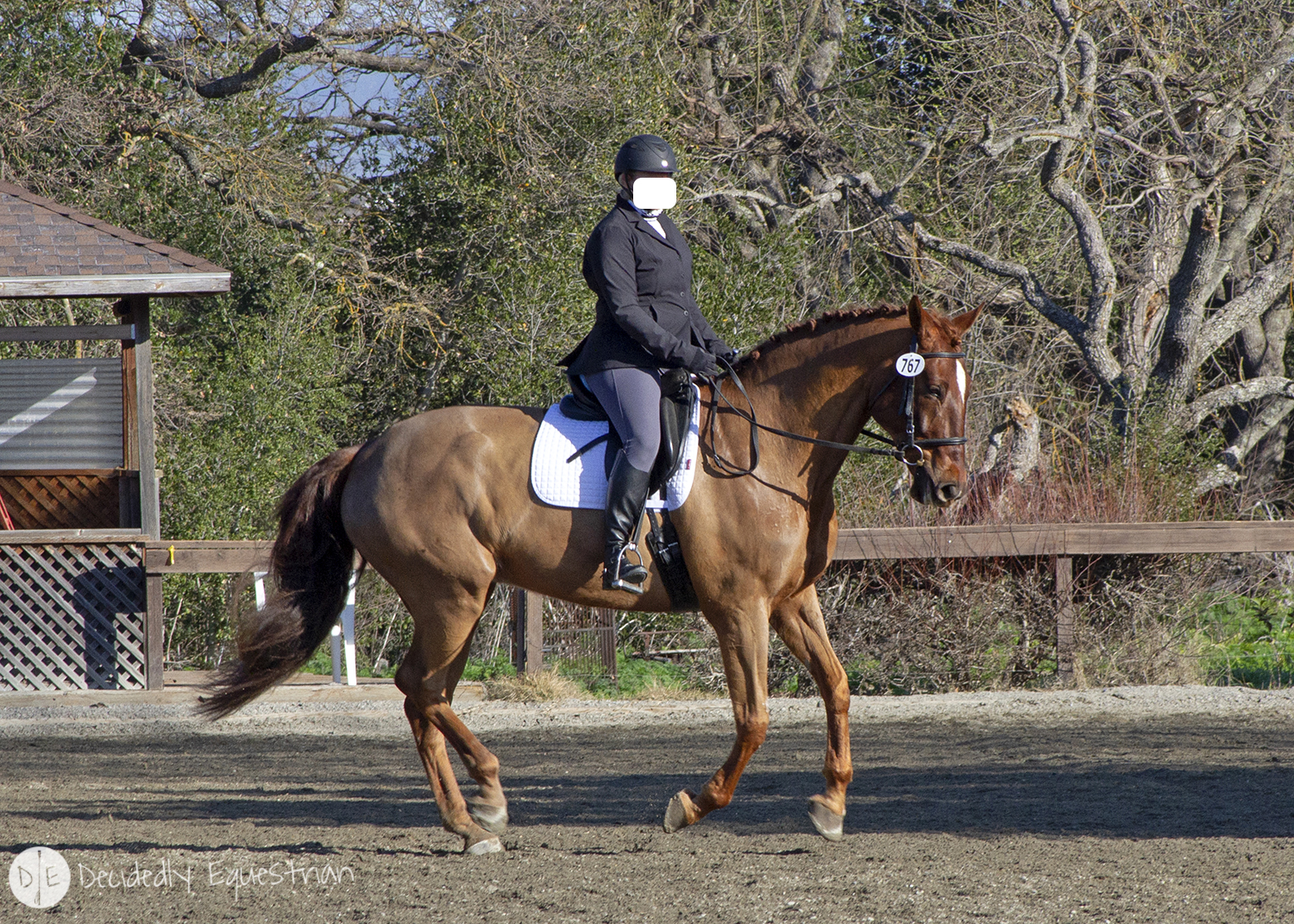 The weight snuck up on us…about two months after starting him on this supplement and by the holidays he was FAT…and after the holidays…well…VERY fat.  We’ve been able to literally cut his food more than in HALF and he’s still a chunk, but slowly getting less chunky.  We’re talking…10 lbs a week…maybe.  Once he gets back to the weight we want, I’m thinking he probably will be eating at least half (maybe less) of what he was eating before.  That’s a lot of savings in hay.  Now you know why I cut the alfalfa pellets and rice bran – unnecessary calories.  Lucky for Jax, the Grand Premium Plus must taste amazing…because he goes crazy for it and devours it…if it’s by itself or mixed with anything else. 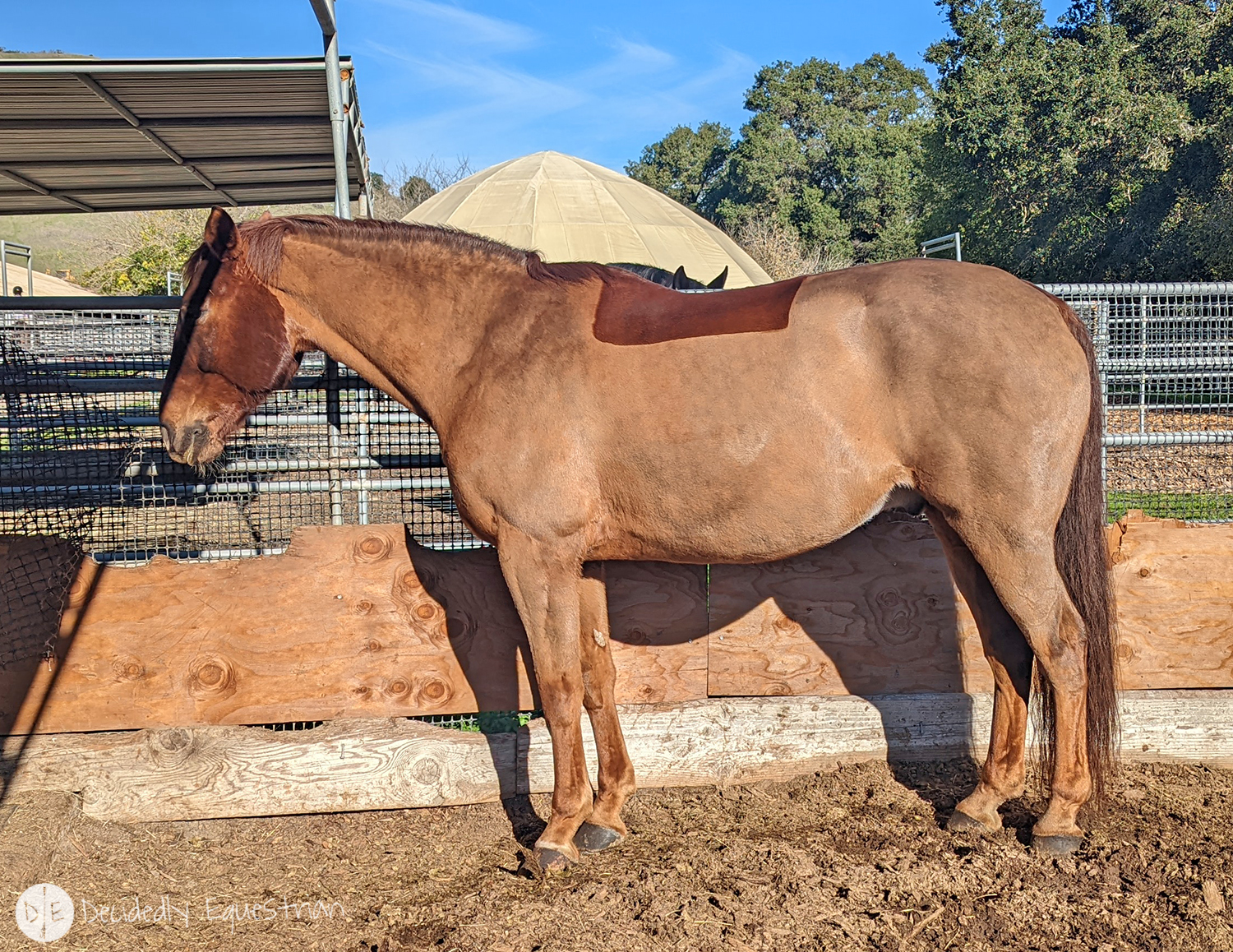 Chubby before the holidays (mid December)

After talking with Nick about the “gordo” situation (as the stall cleaner has started calling him), he let me know that most likely what was happening is that now that his body was getting all the nutrients it needed and not lacking, it wasn’t having to work as hard to function as it had before with a lack of nutrients…even with all the calories.  That makes total sense to me…because he wasn’t supplemented before.  I assumed that it was something like this, but again…I’m not a nutritionist so I needed to ask the expert.  Clearly he wasn’t getting everything he needed from his diet before, and now he is.  He looks fantastic. 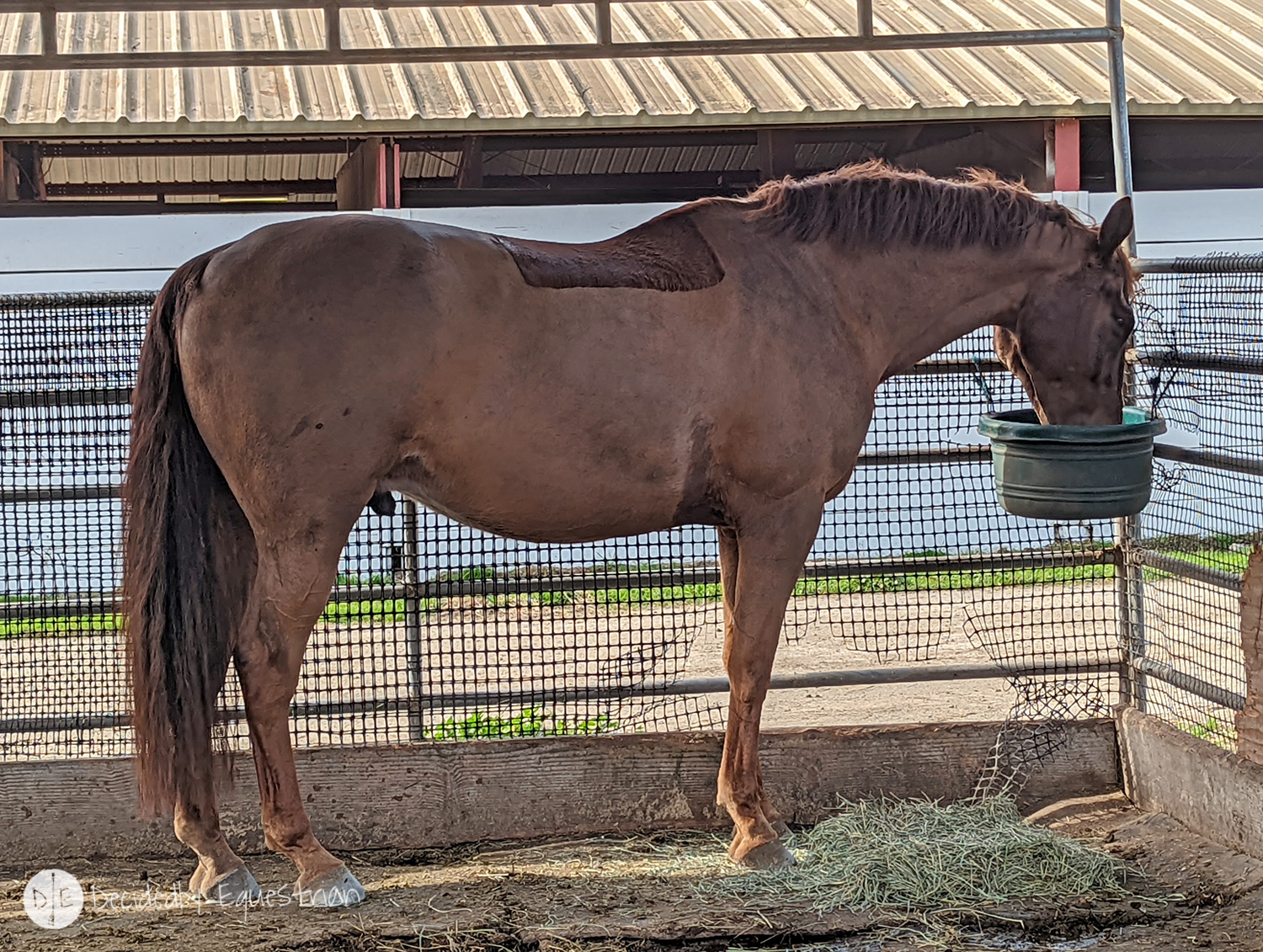 Quite fat by mid January…notice the further development of lumpy butt (kinda looks like mine). Wrong side for the crest, but he’d also gotten quite cresty. Ribs…gone. Fat pads in his shoulders.

The cost per use of this product is going to entirely depend on how big your horse is and how often you feed it.  Jax is an enormous beast…so based on the instructions I need quite a bit a month if I was feeding this full ration every day.  However, since he only gets his supplement 4-5 days a week, the price is a little more reasonable for me.  I also am only giving him 3/4 of a scoop each day right now as his work is a little lighter.   If you have a pony or an Arabian or a Quarter Horse…or a horse in light work…congratulations!  This isn’t that expensive!  Lol.  If you have a giant warmblood or draft, this is going to be pricey (but isn’t everything).  There’s 28 days worth of product at the 1500lb size or heavy work serving.  Over that…you’re going to need more.  However, if you feed this…you can stop buying other supplements.  So it may end up saving you money if you supplement a lot.

The best value per weight is the 25lb or 100lb box (and if you order with my coupon RMASE you get an extra 10% off).  I buy the 25 lbs box.  Ignoring discounts to account for taxes, I think I’m paying about $3 a serving.  If you have a lighter weight horse, it will be less than that.  I’m notoriously bad at math though so…yeah…maybe do your own calculations on what you’re going to spend on your horse and trust those over mine.  Lol.   Either way, it comes in on par with other “complete” supplements that are actually far less comprehensive than this one.  So you’re getting more bang for your buck this way. 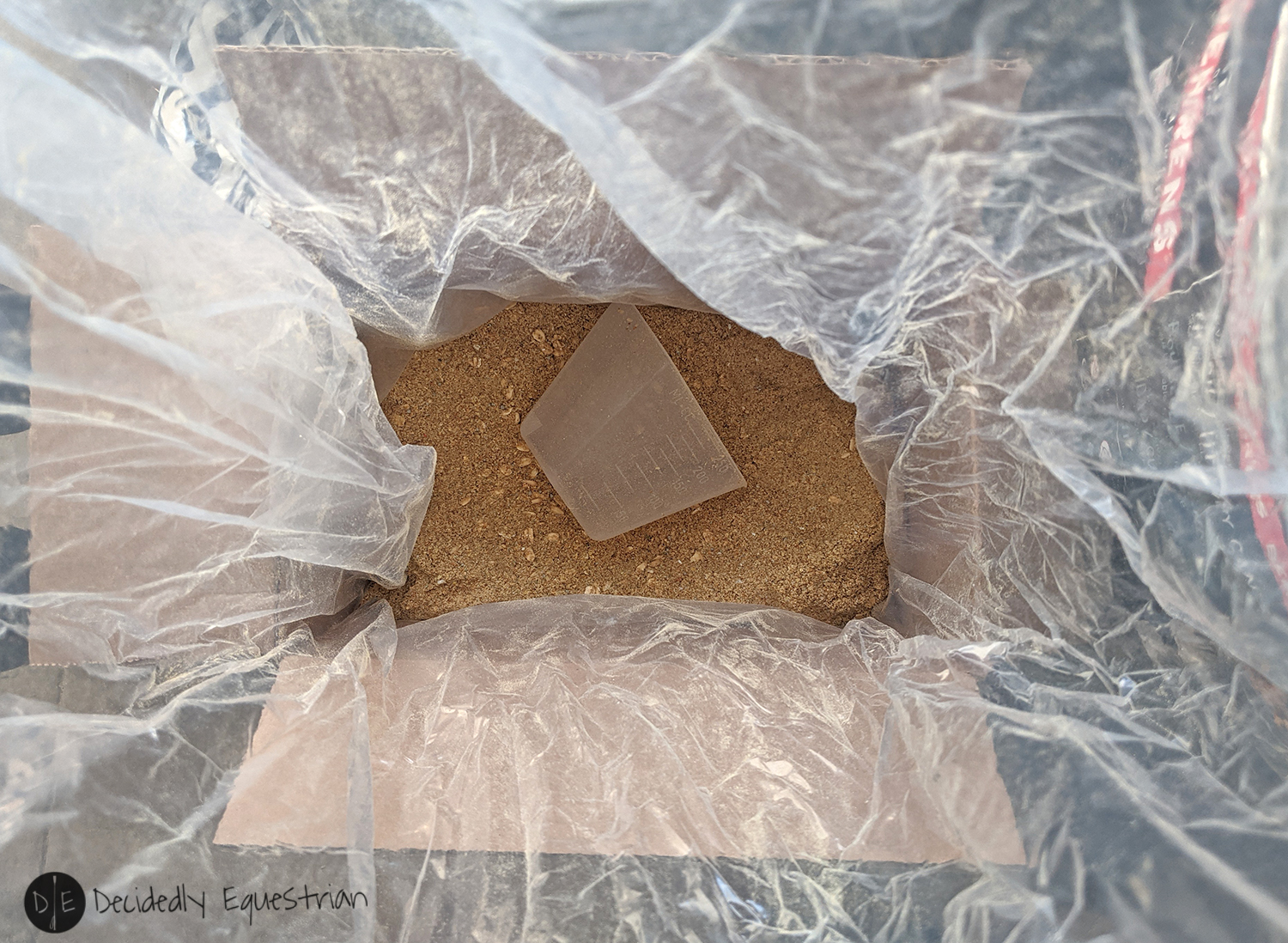 Probably the least important thing about a supplement…but to me one of the most impressive things about this supplement…is that it comes in a cardboard box (even the small size).   Huh?  What the heck is the big deal with that?  Well…every time I throw away a single use plastic item (like supplement tubs)…I feel gross about myself and what we’re doing to the planet.  Not to mention they almost always have the supplement in another plastic bag inside the plastic tub.  Grand Premium Plus comes in a plastic bag (sealed with a very handy reusable zip tie) inside a cardboard box.  So you can keep it in the box…or toss the box and fit the plastic bag into whatever container you use for storage.  I absolutely love this part of the product, even if it’s a bit of an afterthought for most people. 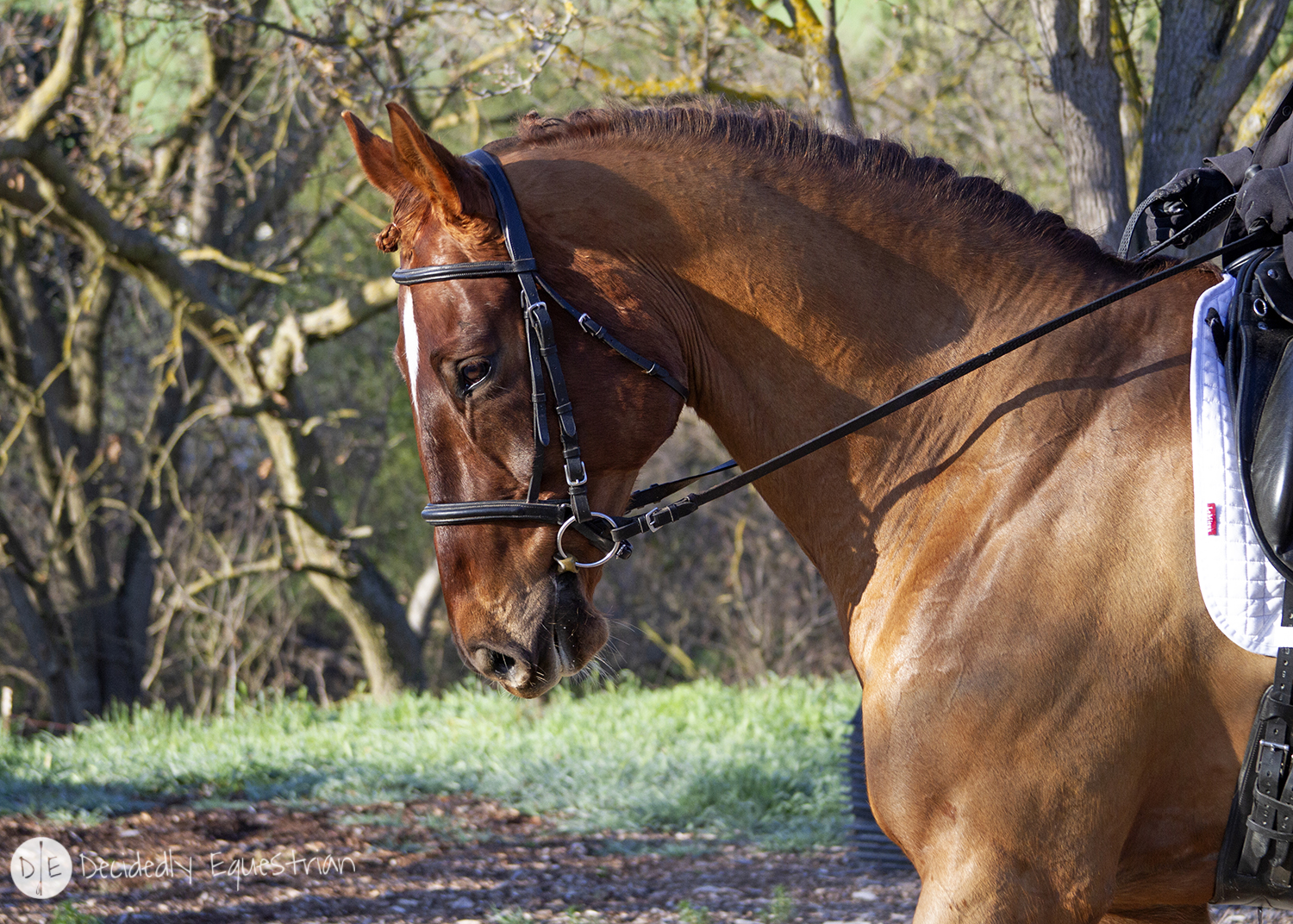 Looking quite beautiful in late February at a show with his mom (even if a little bit fat still). His coat looks amazing for a growing out winter clip!

I plan on keeping Jax going on the Grand Premium Plus for the foreseeable future since he’s doing so well on it.  In my particular situation (where I don’t pay more for hay because it’s built into the stabling price at the facility no matter how much is fed), it’s not saving me any money, but for people paying for hay (especially as high as prices are projected to get this year), adding this supplement in to see if it can help reduce your horses caloric needs isn’t a bad experiment to try!

Kristin will be reviewing this product as well on her new horse!  So be on the lookout for that coming in the near future!

Use Code: RMASE for 10% off and flat shipping on your Grand Meadows order.  Discount extended to NANOFLEX until the end of 2021! 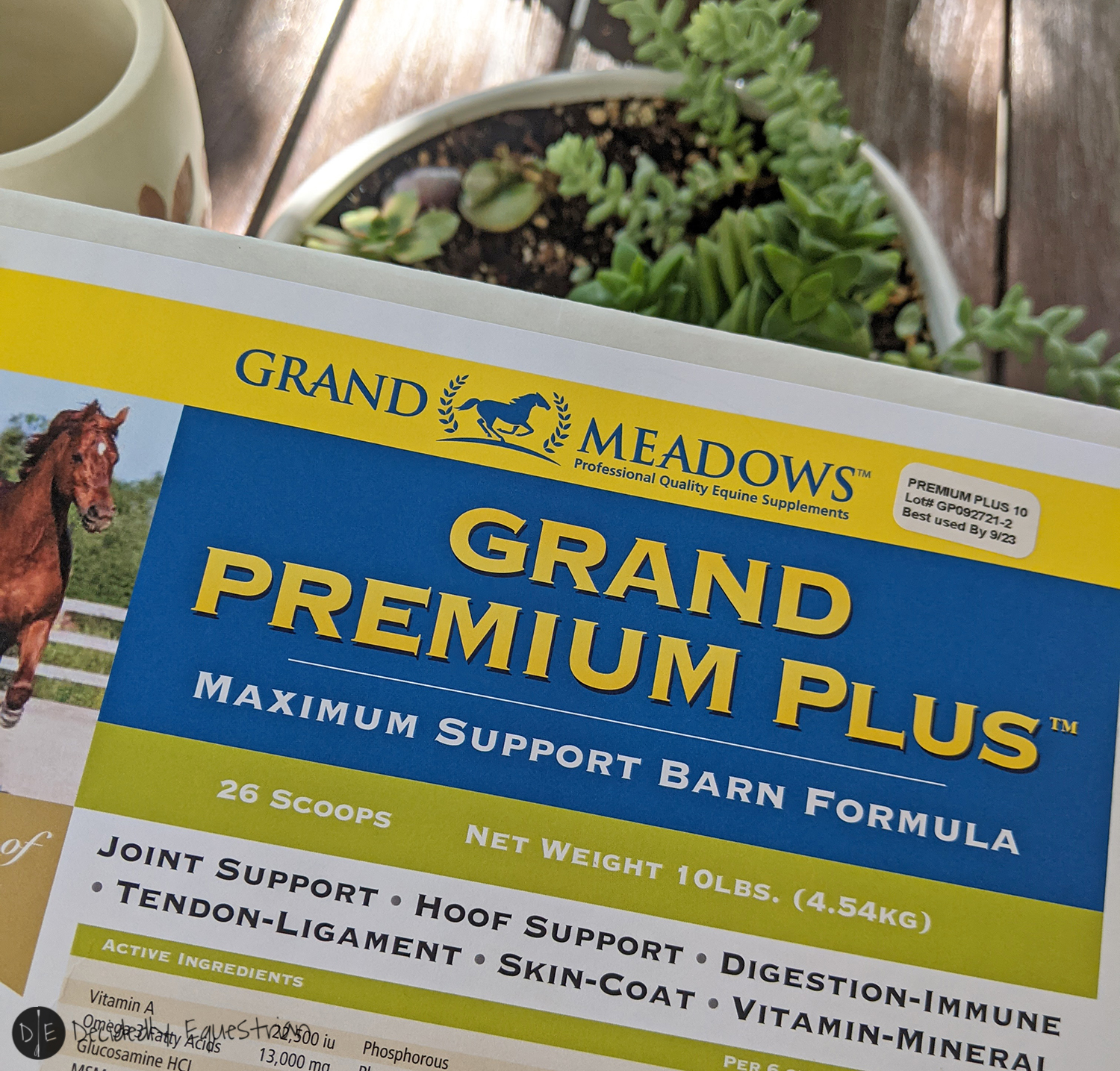