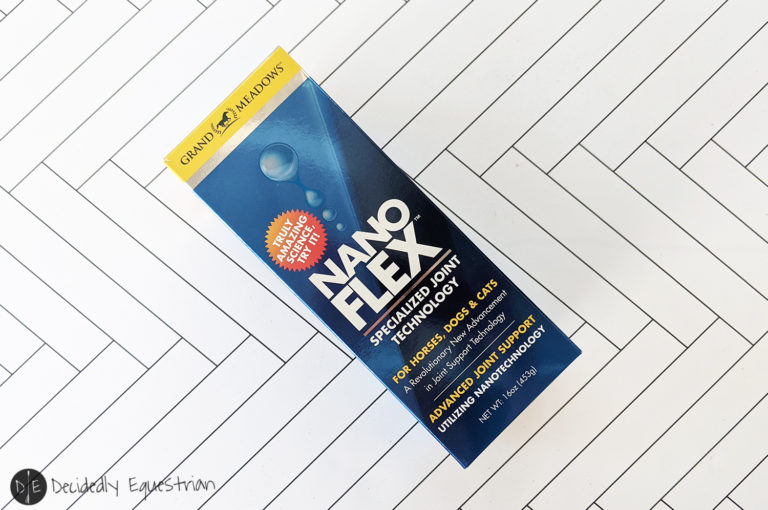 So a couple of disclaimers about me before we get into this review.

1. When I’m broken…I will just sit around and ignore it…even if there’s stuff I can do to make things better.  I will literally walk around all day and be in a funk because I have a headache and my husband will go… “Have you taken any Tylenol, crazy lady?”  The answer is always no.  I haven’t.  Something has to be falling off for me to go to the doctor or anything.  Now…I will say I do not do the same thing with Jax…if he has a scratch I’m on it like it’s a major emergency.

2.  I’m dubious about anything that’s supposed to make me feel better.  I don’t trust it.  And I don’t think it will work (because it usually doesn’t).  I feel the same thing about stuff for the horse.  Rarely have I been impressed by pain reduction things…

So, when Nick from Grand Meadows reached out to me about their product NANOFLEX I was intrigued, but certainly dubious.  A topical joint product that soaks in through the skin to add lubrication to the joint and allow healthy function?  Drug free and FEI/USEF safe?  It sounds like a fantasy.  It had been on the market for many months, but I hadn’t heard anything about it so far.  Is it snake oil?  I was willing to give it a go and see what it could do as:

1.  It wasn’t made with anything that was going to hurt me or my horse.
2.  It fit my lazy / ignoring problems part of my personality with being as easy to apply as a hand lotion. 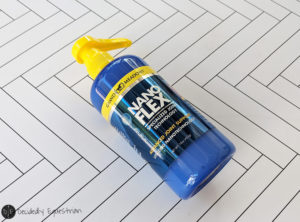 After I used it, I am beyond confused why this product isn’t the talk of the equestrian world.  This stuff is a game changer.  Maybe people want to keep it their little secret?  You know how some trainers can be…anything to give an edge in competition!  Well it’s not a secret now.  Once the AA’s get it…we’ll share it with everyone! Ha!

Before I dive into it, I do want to let you know there’s a coupon you can use for 10% off your order and flat rate shipping on all Grand Meadows products. NANOFLEX isn’t typically included for any discounts, but this code is good for 10% off that too until the end of the year (that’s 2021 if you’re reading this in the future…code is still good for other products but not the NANOFLEX)!  Use code: RMASE

Also, note before you buy this…go read about it and how it works (there’s some studies linked on their website as well on the technology).  It’s made for joints / arthritic problems.  If you have muscular issues or nerve issues or ligament issues this isn’t going to help you.  It might help tendons…but then again maybe not.  The science of how it is working is still very new. 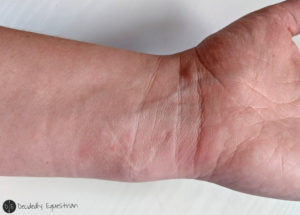 I decided the best way to test this product…was to test it on myself first…then the horse (which I do a lot…).  I have been using it on my wrist regularly for just under a month and have had some interesting observations. I have a complicated injury from a couple of separate injuries.  Arthritis, bone spurs, tendons catching on the bone, large lumpy tendons…it’s a mess.  I usually have huge large lumps on the tendon that are noticeable and gross (at least according to my husband).  I’ve already had surgery on it once to clean it up…but it’s never going to be right again.  The only thing that’s made it better to this point is injections…but that’s just deteriorating it further…and I’m in my 30s…so I don’t get them.  It’s so troublesome I have issues opening jars, obviously doing push ups, crawling around on the floor with my toddler…and just picking up a pan when cooking with that hand is impossible.  It’s not comfortable wearing watches.

After a few days of use, I noticed that my wrist wasn’t bugging me so much.  In fact, I started using this right before a huge storm came in here (which is when my wrist feels its worst of course), and there was no change to my wrist for the whole week.  It stayed the same.  The weather has turned colder and I’m usually using my Back on Track right now non stop to even be able to type on a keyboard comfortably…and I’ve not had to do that…for the first time in YEARS.  I’m not completely pain free, but the difference is significant.

As a test…to make sure I wasn’t just placebo effect thinking this was magic…I stopped using it.  On the third day the pain was back to such an extent I didn’t realize that it had been doing so much…After 24 hours of reapplying again, it was back to feeling good.   I have tried this again with the same effect…when I don’t use it…I notice again after a few days the pain is back full on.

Even more exciting, the swelling in the tendon has gone down significantly.  The lumps that are in there have decreased probably 75%…so I am guessing the NANOFLEX is somehow easing the issue.  It’s not supposed to necessarily work on anything but joints/arthritis…but I’m thinking maybe it’s adding some extra lubrication to the tendons in the area as well.   I can do push ups/planks now without significant pain.  Ditto crawling around on the floor.  And opening jars is getting easier as less pain is allowing me to use the wrist and build strength back in it.

I have settled on about 1 application a day, with an additional application thrown in if I feel any extra aching or I know I’m going to be putting extra pressure on it (the days before my workouts) and that seems to be pretty good maintenance.

For Jax, he does come out sticky in the hind in many days.  I have noticed that the stickiness he sometimes has in his hocks isn’t as prevalent right now, but he also has phases of that too where he moves better…so it will be harder to tell without longer term usage.  It has been quite some time since he had injections, so that’s not an interference.  I’ll be buying another bottle to keep testing it for him.  If it’s working so well on me, I can imagine it is working just as well on him.  I will update this if I notice anything that seems worth noting…like it not really working, but I’m going to otherwise assume it will work based on how it’s working for me. 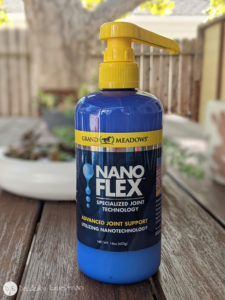 As just mentioned, it’s quite pricey…especially if you’re using it on a horse.  If you’re using it for yourself…you are probably going to take a LONG time to go through a bottle (hell I’m still using my 1 oz sample bottle on myself)…but for a horse that needs it on bigger joints like hocks or stifles…you’re going to need a bottle a month (Jax’s big bottle is half empty).   However, if you’re paying for injections regularly you’re going to come out about even and not have to deal with the risks of injections.  I have already reordered a 2nd bottle and more supplements from Grand Meadows after a short trial if that gives you any hint as to how happy I am with them.  IMO it’s worth the price being asked.

I think this product is a huge game changer…not just for horses…but people and dogs and cats as well.  I can see a world where in the future we’re all using this daily on ourselves and our animals and walking around pain free and with healthy, supported joint lubrication from non-invasive means.  It’s a dream.

Make sure you check out all the info on the product before you use it.  There are very specific instructions on using the product and you want to make sure to follow directions!

I’m excited to hear how it works for you and your animals.  If you pick up a bottle and try it, please let me know how it goes!

Use Code: RMASE for 10% off and flat shipping on your Grand Meadows order.  Discount extended to NANOFLEX until the end of 2021!