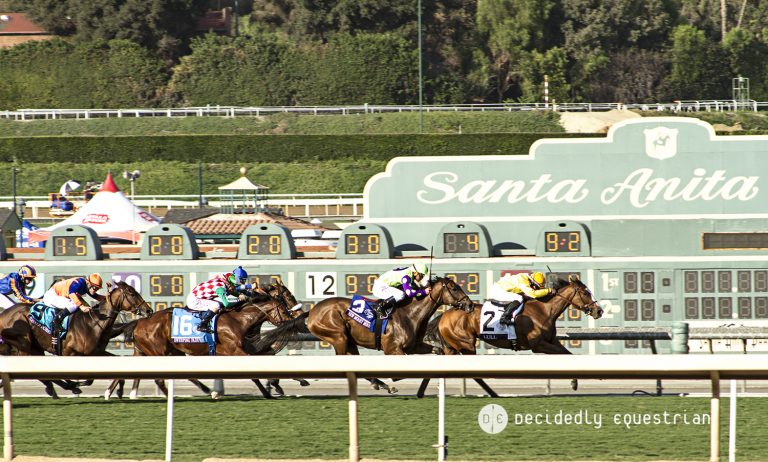 Surprisingly enough, I’m not here to rail against horse racing, defend horse racing, talk about what could be done differently or how this situation could have been handled differently by the parties at play.  Those are much bigger discussions. I’m here simply to ask you to take a moment the next time you see one of these attention grabbing, gut wrenching headlines…take a moment and let the emotions wash over you.  Acknowledge them. Accept them. And then take a step further and think about the issue on a little deeper level. Read the articles. Read opposing articles. Read between the lines.

We are treading dangerous waters now and things are looking grim.  Horse racing is in very real danger in California, and if the most drastic happens…the ramifications will be felt across the country and across ALL horse sports (yup even yours).

You may or may not know, but I’ve been actively working in Thoroughbred Aftercare for almost a decade now. First as a volunteer mucking stalls and grooming, then in organization operations, and now for the last three years as the Aftercare Liaison at Golden Gate Fields (yes…the track has an on staff person to assist finding homes for horses after their racing careers are over…did you know that?  Stronach Group has been paying me for over three years…and someone before me…just to help facilitate safe homes.  Most other tracks around the country do NOT have that…so throw Stronach Group under the bus if you must…but know what they’ve been doing right too).

How did I start working in aftercare?  Emotions.  I grew up as a horse racing fan and always viewed it as a way to do penance for loving the sport. Yes…I view it as penance for being a fan in a dirty industry. I’m not blind or stupid…and there are bad people in racing, but I’ve met plenty of good too.

I don’t like that 23 horses have broken down at Santa Anita since the end of December.  I don’t like it that horses break down at other race tracks across the world every day.  It doesn’t make me feel good.  It doesn’t make me feel good either when my friend’s horse is injured jumping, or barrel racing, falling down a ravine while trail riding, or hanging out in their paddock either.  It doesn’t make my heart happy when I hold their heads watch the light go out in their eyes.  Having an animal die or get injured doesn’t feel good.  It feels awful, no matter the circumstances.  But I’m not going to stop working with them because of it.  I’m not going to blame my friends when something happens to their horse.

As strong as emotions are, I also know when it’s time to step back and think.  While attention-getting headlines exist to draw us in, make us feel disgust and pain…they don’t help a single thing.  In fact, they hurt. Their goal is to stir emotions for clicks, comments, and shares. That is the age we live in. Their goal isn’t to make you think.  Their goal isn’t to give you the real situation laid out from all perspectives. And this is where we need to be careful.

If we bend to emotion instead of using our intellect to think through a situation, we’re in real danger of throwing everything away to the extreme elements of our society.  IF racing ends in California (and that’s the direction the extreme animal rights activists want this to go) that’s thousands of horses that will imminently need homes.  As a person working in Aftercare that has had struggles finding homes for hundreds…I’m here to tell you…those homes don’t exist.  THOUSANDS of horses will be at risk.  That is a VERY scary thought to me.  PETA leadership would be fine if they were all euthanized.  Would you be okay with that?

And if it ends in California, it will only be a matter of time before it ends in America.  So take that number up to  HUNDREDS of thousands of at risk horses.  Let that sink in. Twenty three deaths is awful…but think about how 100,000+ Thoroughbreds dying makes you feel.

If we bend in and give the extreme elements what they want…they will take MUCH more.  Let them end racing and you might as well give them all horse sports.  Your sport will go too…because NO horse sport is 100% safe for horses.  Not even trail riding.  If “one more death” is not acceptable in horse racing…then one death isn’t acceptable in any of the other sports either.  Think on that.

The best way to move forward in this situation isn’t to call for ending horse racing or closing tracks as I have seen hundreds of comments on social media calling for…  The best way to move forward is to ask the industry to improve and change.  Stronach Group is trying…I really believe that…but there is much more to be done all over our country.  Show up at those public meetings.  Give your opinion and ideas.  Volunteer.  Donate.  Get a job in the horse industry (any sport!) and work to change it from within.  It’s NOT just a California problem and it’s not just a Horse Racing problem.

Next time you see one of those attention grabbing headlines that jerks your emotions and makes you react in a way your rational brain wouldn’t…take a minute and ask yourself “what can I do to help this situation? and “what are the true ramifications here.”  Move forward from there.

And to the MEDIA…please stop using sensationalized headlines just because you want clicks.  Especially equestrian sport media. Shame on you.  You’re going to lead to your own demise.

Update:  Comments are now closed because people can’t play nice and by the rules.  Comments that include personal attacks against certain people and/or naming names or comments that are clearly trolling (aka attacking the writer) will not be approved.  We support opinions here.  We don’t support being nasty.