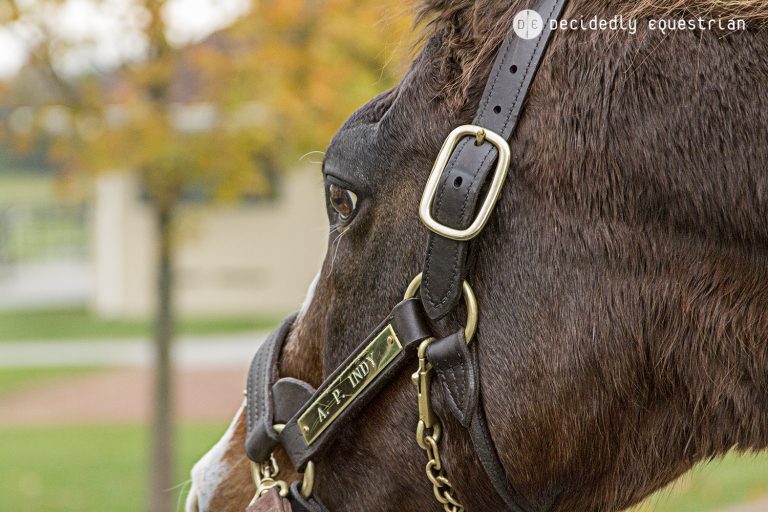 I’ve already shared my experiences from the Retired Racehorse Project’s Thoroughbred Makeover 2016 with you, but I thought it would be a shame not to share the rest of the photos from the trip (as I took so many of such GREAT horses). 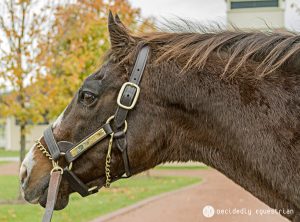 First stop (fresh off the plane) was Lane’s End.  I have had the pleasure of visiting this farm before, so I knew what to expect.  Or thought I did (I am a dummy and forgot Curlin no longer lives there and didn’t get to see him this trip.  Sadness).  I did get to see a now 27 year old AP Indy (almost 28!) for the third, and likely the last time (but I can always hope!).  This grand stallion is starting to show his age, but was just as noble and beautiful as ever.  I feel blessed to have gotten to scratch that furry shoulder.   Honor Code was a site to see as well, though he wasn’t a fan of pricking his ears for us.  He’s a handsome guy.  They were also kind enough to bring out Tonalist after hearing our chattering about him at his stall.  This horse is HUGE and a bit of a goof as you can see from the photos.  I didn’t get one photo of him where he wasn’t looking a little bit dorky…and I love it! They are very gracious and professional at Lane’s End and have been giving tours a lot longer than many of the farms, so the attitude is more casual.  It’s a great farm to visit if you get the chance. 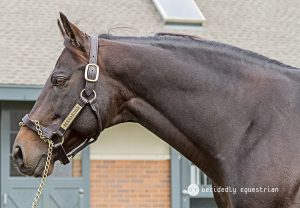 Later that day I was lucky enough to get into Darley for the first time, and boy was it worth it.  A beautiful property, great barns and a great tour guide.   They brought out the absolutely stunning Bernardini and the sociable Animal Kingdom.  I never really thought much about Bernardini either way until I saw him in person and man…hubba hubba!  That’s a horse.  I understand why they sent Rachel and Zenyatta to him.  Animal Kingdom is one that I wanted to geld and bring home with me.  Gasp!?! Why?!?  Because he was awesome.  Handsome, but not too handsome and he kept inching as close to people as he could…and was the one stallion that would not leave his stall door when there were humans nearby.  He clearly likes being around people.  We also got to see the great Holy Bull (now 25, almost 26) beg for carrots. Our group also lucked out and got to watch Street Sense get his feet trimmed by the farrier.  To top it off, they gave us Bernardini hats when we left!  The hospitality at Darley was second to none. 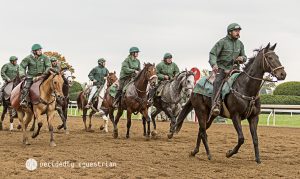 This was my third trip to Keenland, but my first time during racing and it didn’t disappoint.  I showed up late in the day after two stud farms and a trip to the horse show and only had 3 races to go for the day.  They let me in free and gave me a program free.  Talk about hospitality.  I took in a few races before turning into a pumpkin. 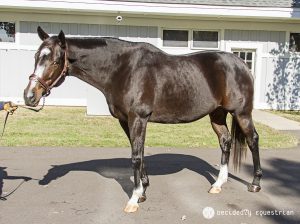 Friday was day I was looking forward to more than anything on the whole trip.  The day I got to meet Rachel Alexandra at Stonestreet.  I’m not sure there will be many days in my life that will top this.  The group met up at a guest house on the Stonestreet property that was decked out in tribute mostly to Rachel, but a few of their other top fillies as well.  In this house they had her Champion 3-year-old Filly Eclipse Award, her Horse of the Year Eclipse Award, her Preakness trophy and her Woodward trophy as well as dozens of photos of her and her races playing on repeat on the TV.  There was coffee, donuts and fruit and a room full of the some of the biggest Rachel fans you can find.  I admit to having a bit of a fit of nerves and some tears while sitting there in that room.  I was about to meet one of the truly great horses of all time.  As for meeting Rachel, it was everything I could have wanted.   Rachel stood quietly while we all circled around her and took turns petting her, hugging her and getting photos.  It was a beautiful fall day and she started to doze off in the sunshine.  The staff at Stonestreet were nothing but generous, kind and happy to have guests to see their great mare.  Maybe one day I’ll work there. 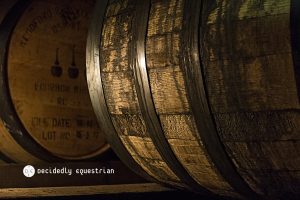 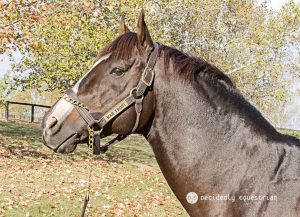 Sunday several of us went to Claiborne Farm in the morning to see the hallowed ground where Secretariat was conceived and lived out his breeding career.  This farm was much different from the other three in that it is small and quite old.  The breeding barn was over 100 years old.  The stallion barns are also historic and while not as fancy or pristine as some of the more modern facilities, you couldn’t help but feel the weight of the decades of greatness that has passed through that land.  We got to see War Front (what a gentleman he is!), Orb “the biteyist horse we have” and the infamous Blame (of Zenyatta beating fame) who has a funny “trick” he likes to perform for his visitors.  The cemetery at Claiborne is one to make a racing or pedigree person breathe deep in awe.  Our tour guide was one of the stallion handlers and he was great, if a little rough around the edges (which added that much more flavor).  Claiborne Farm isn’t to be missed. 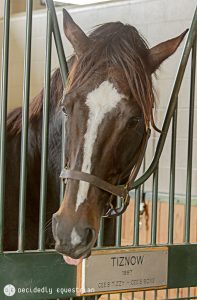 My last farm tour (just three hours before my flight was to leave) was at WinStar.  I was excited to visit WinStar because I have participated in their contests for years and had won a Distorted Humor halter from them many years ago.  I wanted to see him, but was disappointed when they declined to bring him out of his stall for pictures (though they allowed photos of him at his stall).  We got to visit and feed mints to Pioneerof the Nile (American Pharoah’s sire) and he has a great personality.  We also got to see the great Tiznow and young sires Take Charge Indy, Overanalyze and Bodemiester (among several others). The only horse they brought out for us was  Kentucky Derby winner Super Saver. 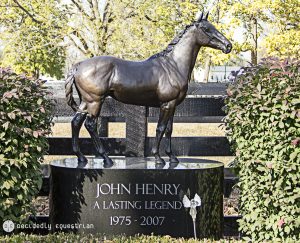 Though not everybody’s thing…I were also able to visit the grave sites of legends scattered around the area.  I saw several Triple Crown winners graves while in Lexington, including Secretariat, Gallant Fox, War Admiral and Affirmed.   At Kentucky Horse Park you cannot miss the tribute and grave to “the mostest hoss there ever was” Man O’War.  Others at Kentucky horse Park are War Admiral, Cigar, Alydar and John Henry.   Also at various farms are Kingmambo, Dixieland Band, Street Cry, Mr. Prospector, Round Table, Princequillo, Nashrulla, Riva Ridge, Nijinsky II, Gulch, Smart Strike, Saint Liam, Summer Squall, Weekend Surprise, Fappiano, and many others.

Lexington is filled with the history and blood of our noble thoroughbreds going back generations.  Any racing or thoroughbred enthusiast would not go wrong with a visit to this area.  You’ll find yourself never wanting to leave.