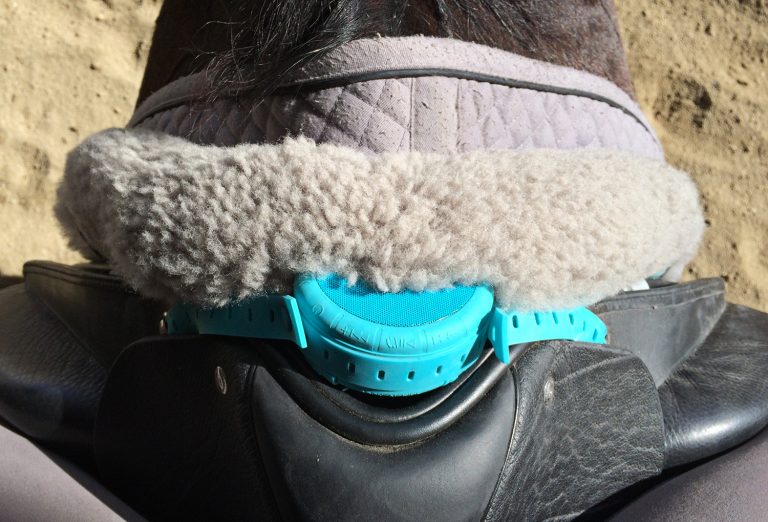 Rachel Masen·November 28, 2016
Reviews For the HorseReviews For The Rider
Design
7.5
Sound Quality
8
Ease of Use
9
Durability/Quality
10
Battery Life
9
8.7

Back in June, we did a company spotlight on Hoofbeatz Audio and their new product i Rock N Ride.  At that time they had a Kickstarter going on and their product wasn’t available yet except for a handful of first run testers.  Jump forward to October:  their Kickstarter was funded (and I got my i Rock N Ride), they are being picked up by vendors and it looks like this product is one of the “next big things.”  We have been using our i Rock N Ride for several months now and feel that we can certainly give it a review it deserves. 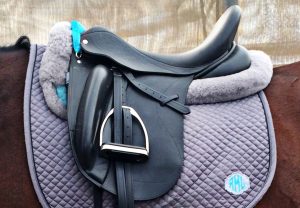 I ordered the teal/turquoise one, though I worried how much it would show dirt.  It doesn’t too badly.  You can see the dirt that is trapped in between the strap and the body of the speaker, but a quick wipe off and there are no problems.  Dirt and water were of course my biggest concerns with a tech product at the barn, and so far it hasn’t been an issue.  I’ve given a quick bath with this in my pocket (I forgot it was there) and it got splashed.  No problems.  I keep it in the tack room…and the dust from riding in the arena kicks up on it just like it does everything and so far there’s been no issue with dirt damaging the speaker.  The dirt does stick to the rubberized cover a bit, but it’s easily cleanable.  In the long term dirt might cause a problem to the speaker, but they did a pretty good job sealing it up.

This product is pretty easy to use.  Especially for just playing audio.  I will admit I have not used this product to text, take phone calls or write notes to myself or anything like that.  I wasn’t really looking for an extension of my phone (as I prefer to take texts/calls after my riding is done).  I just wanted a nice speaker attached to my saddle for riding.  Spice does better (and so do I) when I have some music on.  Using the phone speaker was an awkward option as it was either unsecured and I could hear it, or secured and pretty muffled.  I also think it’s unsafe to ride with headphones as I need to be able to hear approaching trucks/tractors, other horses and wildlife because Spice is more than happy to spook at all three of those things. 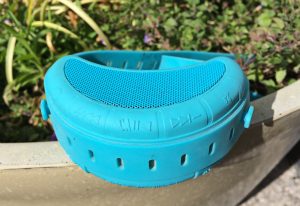 The attachment method was a bit tricky at first especially with my big fluffy pad (it is much easier in my opinion to attach to a western saddle).  Once the band stretched out a bit it got much easier to attach and didn’t pop loose.  I’m not sure how long the attachment straps will hold up attaching it to the d-rings on my dressage saddle, but I’m sure I’ll be able to buy another strap if necessary.  The design is for sure better suited to a western saddle.

The battery life seems to be pretty good.  They claim 3 to 6 hours of continuous use, but I have been getting 10 or so hours of non-consecutive ride time before I have to recharge.  It also doesn’t drain your phone battery. Score! 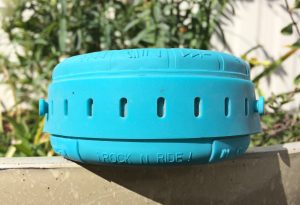 My biggest…and really only issue is that the notification sounds are REALLY loud and fairly unpleasant.  They seem to be a standard volume no matter what volume you have it set on and the loud “Hoofbeatz” “DING” and “Goodbye” could really spook some horses.  Spice was a bit concerned the first time I introduced it to him (not attached to his saddle I might add for safety), but now he doesn’t even take note of the noises.  However I can see this getting some people in trouble if they’re not careful.   Another issue with it could be that other riders don’t want to hear your music/phone calls/lessons coming out of speakers attached to your horse…but oh well!  If they want quiet they can go to another arena or ask you to turn it off.

All in all we really like this product, it has added positively to our riding experience and we recommend it to our readers.  You can buy i Rock N Ride on their website here!  If you need more information, visit our Spotlight or the i Rock N Ride website.