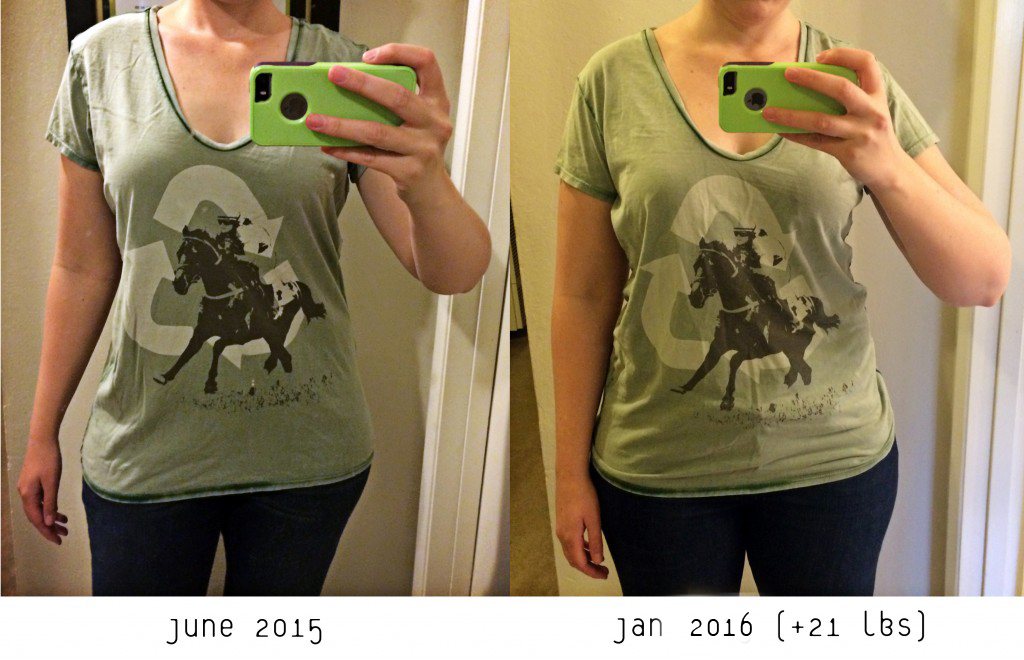 Losing Fitness and Getting Fluffy

Almost every rider (and almost every human really) encounters times in their life when their fitness routine and weight management starts to fall apart.  I’m at the end of one of those times.

One year ago I was 5 lbs lighter than I am now and in the middle of a fitness and weight loss plan that included a personal trainer and eating little to nothing.  Fast forward to June and I was 16lbs lighter than in January, feeling good, and eating healthy (but not starving).   In September, I was only 2 lbs heavier than in June and maintaining. I kept a steady weight through show season and all was well in the world.

To save you the math, I’m 21lbs up from my show weight over the summer as of this week (early January).  The idea of getting back in my white breeches and tall boots is terrifying right now.

While all of that sounds drastic, note I’m 5’9″ and I’m still wearing the same size breeches (I have big muscly legs).   In fact they fit a bit better around the waist now that I’m a bit chunky (sad to think that).  That’s what 21 lbs is on my frame.  It’s not quite as terrible as it sounds (or if it would be if I was say…5’4″) but my body is starting to feel it and you can clearly see it in the photos above.  It’s not that I’m “fat” that is the problem (though I do have more fat than is really ideal at the moment), but that I’ve lost condition in a bad way that bothers me greatly. I started cantering again on Champ this week and found myself winded way to soon and unable to support him with my core the way he needed.

Here’s how it happened.

Reviewing my last few months, it became obvious to me why I suddenly find myself 21lbs heavier.  An simple series of events threw me off…first physically, then mentally.  After returning from a holiday vacation out of state, I weighed myself and saw pretty much what I expected (and dreaded).  I hate trying to get back to fitness around the new year (since everyone else is doing the same), but it just so happens that now is when I need it because of the timing of everything else.  So now it needs to happen now (I’ll just have to fight for machines at the gym).  This is not a New Year’s resolution…it’s a requirement to get healthy and stay there.

If I had been more responsible for myself, I would have caught this sooner…but with everything else that had been happening it didn’t seem important.  None of this is an excuse (there’s no real excuse for what I allowed to happen), it’s just an example of how you can let yourself fall apart and how quick it can happen.

Your body is always important.  It’s the only one you have.  Not only that, I’m forcing a horse coming back from injury to carry around 21 more pounds than he’s used to.  That’s not fair and certainly not helping him.

I will get into my goals and my plan to get back to normal in the coming weeks, but know I’m already on it.  The first step was to do a small workout so that I don’t get so sore I can’t walk.  The second step is to eat right and eat less.  Being more conscious about what I’m putting in my mouth will be my toughest challenge over the many months (though finding time to get to the gym will also be hard with a new job prospect on the horizon).

How’s your health?  How’s your fitness?  We’d love to hear your challenges and what you are aiming to achieve this year.  We’d love to chat and help you with any motivation we can give.  Feel free to send us a private message if you feel the need.