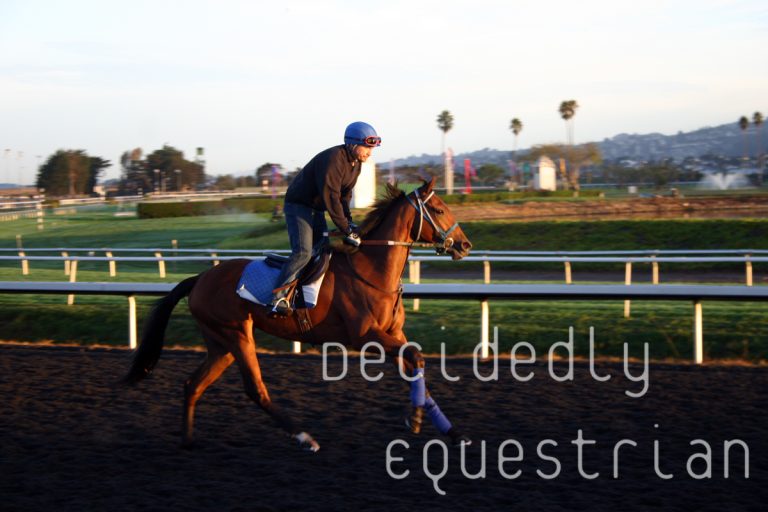 The race track is my favorite place to be before dawn.  It’s actually the only place you will ever find me before dawn that is not my bed.

Every once in a while I get the urge to get up and drive over in the dark to visit backstretch worker friends and some of my favorite horses.  This morning was particularly special.  It was planned for two weeks, but things kept getting in the way.  I finally made it.  It was time to see Champion 2 Year Old of 2013 Shared Belief work out.  He’s prepping for the Breeders Cup Classic.

This world class horse lives at our middle of the road race track.  There are some nice horses at Golden Gate Fields from time to time, but this has to be the best horse stabled here in over a decade.  It’s rare to see that kind of class running on our oval.  I don’t know anyone in the Hollendorfer barn, so I had to settle for sitting on the rail with everyone else and watching him work with two work mates.  It was a strong work and he clearly overpowered them (and looked significantly more powerful than anything else on the track that morning), despite his diminutive size.  I took some terrible video on our phone.  Feel free to watch it and groan at our terrible film-making.

After the champ was done, I spent the rest of the morning watching other workers on the track.  They looked beautiful and powerful as the sun peaked over the Berkeley hills and glittered off their coats.

I then went back into the barns to visit some of my friends, both horse and human.  If you have not been to the backside in the morning, it is a special site to see.  Horses steaming while being bathed after working, grooms running around trying to get their task list complete, and horses stretching their noses at passers by to look for a pet, a treat, or maybe just to bite them.  It’s chaos, but it’s beautiful.

A typical morning for one of these horses goes as follows:  Each horse is groomed, tacked up, and taken to the track in the set they’re assigned to by an exercise rider.  While they are gone, their grooms clean their stalls and prepare their meals.  At the track the horse either does a timed work (once a week), or they jog or gallop a couple of miles depending on their training plan.   Once done, they are ridden back to their barns, un-tacked, bathed and hot walked (either by hand or on a machine).  Once dried and cooled off from their exercise, they are taken back to their stalls.  They then have their legs tended too and many have them massaged and covered in one of a number of products that help to ensure they stay sound and don’t get sore.   They are then left on their own for a while to eat and nap and do whatever else pleases them.  Their stalls are cleaned again later in the day, and they are fed again at least once.  They have access to hay 24-7.   Sometimes this routine is broken by a vet visit, farrier visit, or by a race day routine.  Horses know when it’s race day as their routine changes.  They are quite bright animals.

If you ever get the chance to go on the backside and spend some time with the horses and backstretch workers you will learn that just like other equestrian sports – racing is a lifestyle.  These people live in the world, but in a way are totally separated from it.  While most people are worried about deadlines and emails, what these people do is always in relation to the needs of a horse.  They work hard and dream harder.  It is a magical place that I can only hope can keep existing as our world plunges into an uncertain future where horses only become harder and more expensive to care for.