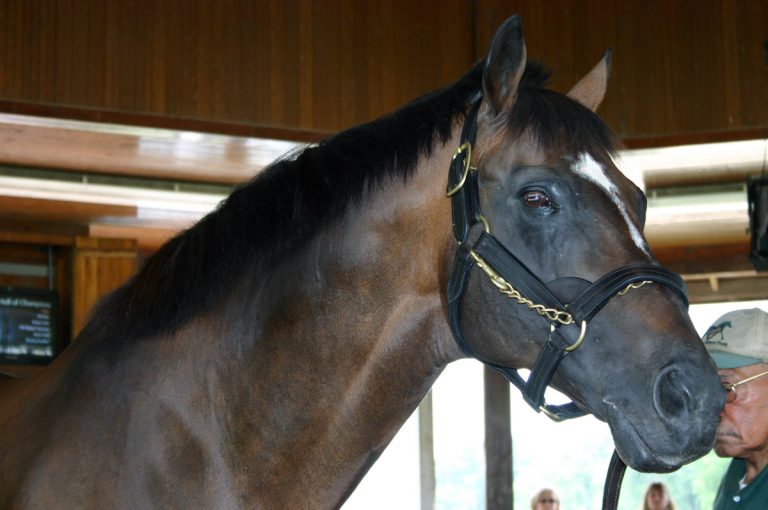 In 1995 there was a very sad and stressed 11 year old girl.  She had recently lost one grandmother and would soon lose a grandfather.  This girl (as so many before her) loved horses, but her love had been aimless to this point.  She knew she had to have that connection, but hadn’t found the horse or the sport she loved yet.

Her other grandmother had heard about a horse named Cigar who had started winning every race he’d entered.  Knowing how much the little girl loved horses, her grandmother shared Cigar with her.  She would call the little girl after his wins and tell her about them.  He always knew how to win.  The little girl needed a hero and she found one in this horse.  She eagerly waited for news of him from her grandmother.  She hoped she could go see him one day.  Eventually the news stopped coming, but the little girl never forgot about her horse Cigar.  She was given a Breyer model of him which she cherished.  She was given a piece of artwork to hang on her wall of some unnamed racehorse, but in her mind that horse was always Cigar.  That artwork hangs in the hallway of her new home almost 20 years later, and she thinks of him every day when she walks by it.

This little girl had her dreams come true several years ago.  Her boyfriend, now husband, took her to see some of her favorite racehorses for her birthday.  They made the long trip to Kentucky.  The little girl got to see her new hero Curlin.  She got to see her childhood hero too.  She insisted on a visit to the Kentucky Horse Park to see this legendary figure, the almost unreal protagonist of her childhood heart.   He was handsome and proud.  She was happy.  He had let her touch him.  She felt blessed.

She was lucky enough to see him again several years later.  He looked older, but no less the champion.

Yesterday the little girl heard some news that she might get to take a trip to Lexington in two weeks.  She was excited at the prospect of getting to visit her old hero yet again.  It was more than she had ever hoped for, to see him three times.

Then last night, just hours later, the little girl started to hear rumors on Twitter and Facebook.  She was devastated.

Her grandmother has been very sick for a long time and has managed to miraculously continue on.  She didn’t remember Cigar the last time the little girl brought him up.  She doesn’t remember a lot of things these days.  But the little girl didn’t forget.  The little girl will never forget.  She will never lose the gift that her grandmother gave her – the hero that never failed her.  He is still there, a titan in her mind.  While he did not have offspring to carry on his legacy, he lives on in the heart of this little girl and countless others like her.  He will always be there.  He is the incomparable Cigar.