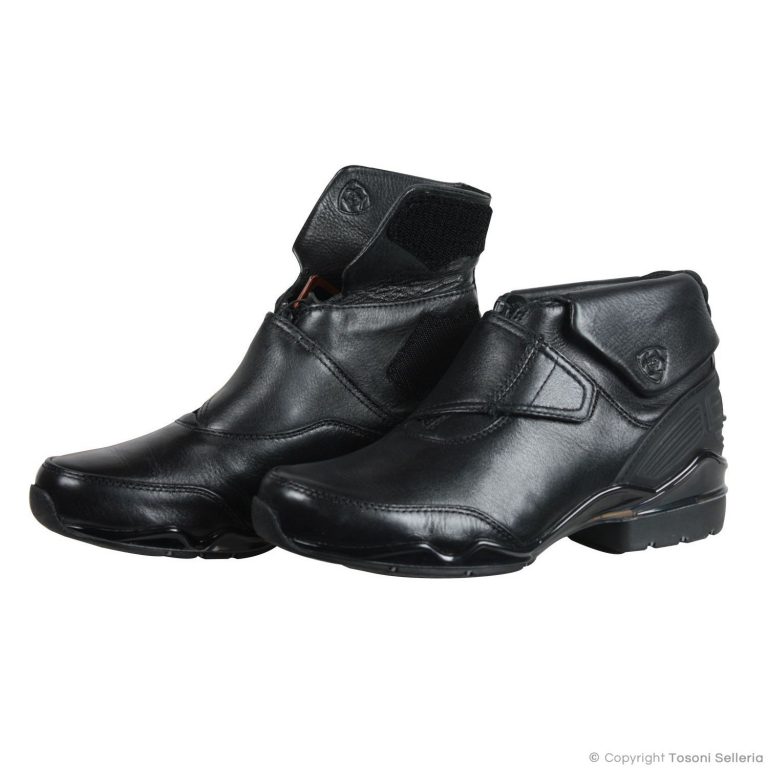 The Ariat Volant Fusion paddock boots and half chaps are an ambitious idea.  An athletic shoe styled as a boot with a chap that attaches like no other.   They were a risk to design since most equestrians tend to avoid trendy and new for more traditional styles.  I applaud Ariat for being so clever. 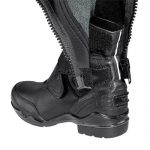 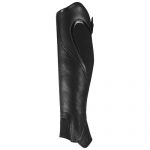 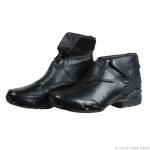 The chaps claim to give a close fit and nice air flow.  They have perforated leather to aid in cooling, stretch panels to aid fit, and an elastic gore fit system over the instep that ensures flexibility.  They have a heavy duty plastic zipper and a zipper lock to keep the zipper in place as well as a snap closure.  They had a neoprene type material panel which aids in the stretch.

The boot is a hybrid boot/athletic shoe with sporty styling.  It includes the Volant engineering and Cobalt Quantum foot beds.  It fits pretty standard to Ariat, which is a bit narrow.

The boots and half chaps are engineered as a system and only work with each other due to the genius Velcro system of attachment.  When worn together they give an appearance of being a tall boot and not a paddock/chap combination.

I have several thoughts on these half chaps.  I love the attachment system and will loath to go back to normal half chaps in the future.  It keeps them cleaner and because the ankle doesn’t need to be so large to fit over the boot there is limited sagging.  Because of the stretch panels, you can purchase a slightly smaller pair than you think you should, and that will keep them fitting snug and gorgeous on the leg for longer than the average half chap.  The zipper is very sturdy and has not been an issue whatsoever in well over a year of heavy use.   They are cooler than the average chap due to the perforated leather, even on hot summer days.  The perforated leather also happens to be the most sturdy material on these chaps. 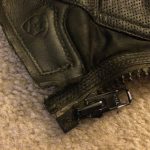 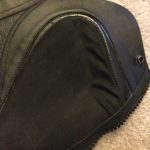 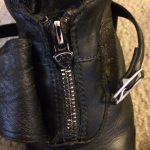 The half chaps did start to wear and fall apart after 6 months or so of heavy use.  The bottom seam of the zipper has started to rip.  The neoprene started to disintegrate and tear (though they’re still solid looking, you can feel the rubber material under the top layer is torn and bunched in places).  The zipper and snap held steady however, so they are still usable, even if not exactly in fine form any longer.

The boots are wonderful.  I cannot say enough about the comfort of these.  They are sportier and more supportive than your average paddock boot (which has been a godsend for my constantly injured foot) and are great for walking around in all day.   They are heavier than normal, which might bother some riders.  They’re also just a bit bulkier and might require wider stirrups if you tend to ride with stirrups on the narrow end for your foot width.  They are wonderful to ride in and give a close contact feel on the calf and plenty of flexibility.  The zipper and Velcro has held up nicely, as has the outer sole.  The only wear is mostly cosmetic (fading of the paint on the zipper and rubbing off of the reflective strip on the back of the ankle).

I love the rubber back and spur rest.  There is  no spur wear on these boots after over a year of almost daily use.  This was a very intelligent design and has helped keep the integrity of the boot.  I did replace the foot insert after 1 year of use, but that’s a cheap fix.

I love these half chaps and boots and my only regret is that I didn’t buy another pair of boots.  They have been discontinued, which is terribly sad.  This was a very clever design and I enjoy wearing mine for every day riding and training.  If you can get your hands on a pair, I highly recommend them.

Update Spring 2016:  These boots are still in action, though a little worse for wear.  The soles have held up fantastically, but the stitching has failed in many places.  I luckily found a second pair of half chaps on closeout when these were discontinued and recently started using those and tossed the old ones as they were so worn out and stretched they started spinning when I was riding.  I am considering taking these boots into a cobbler to have the seams resewn on the boots so I can keep wearing them for at least another year.