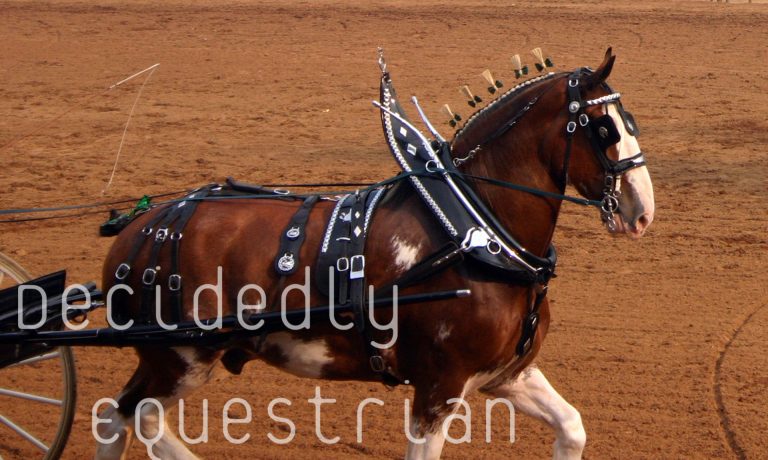 I have arrived home safely from my trip to Grass Valley, CA for the Draft Horse Classic and I am already hoping to go next year.

It was a spectacular weekend of competition and exhibition rides.  This was my first draft show and I was more than impressed.  I saw the 6 hitch, 4 hitch, gentleman pairs, ladies singles, Americana farm, log skidding, Gambler’s Choice, youth singles, and junior singles classes.  By far the most exciting were the 6 up and 4 up teams which were filled with energy and an impending since of danger.  I was also a fan of the ladies single classes as so many of the women selected gorgeous clothing to compliment their horses and carriages and really showed off their horses.

The entertainment was wonderful: a team of Percheron mules, a feisty foursome of Haflingers, a group of vaulters, a combined driving team of Morgan ponies, Bobby Kerr from the Extreme Mustang Makeover, trick trainer Tommy Turvey and his amazing horses, the California Girls Drill Team, and a pair of mini’s doing log skidding.  The between class performances were as good, if not better at times than the draft classes.

I enjoyed looking at the art exhibition and met several artists I hope to profile in the future.  The shopping was decent (though not a ton of it) and the food was abundant and varied.

There was one accident in the log skidding competition and both horses and driver came out of it okay.  It was a scary few minutes, but the horses remained fairly calm and the arena hands were very knowledgeable and got the horse out quickly and smoothly.  I have decided that while driving is beautiful and the horses are truly spectacular (I want a Percheron to ride), driving is not for me.  It is our opinion that it is a pretty dangerous pastime and it’s also very expensive (the most expensive equestrian sport according to almost every driver I spoke with).  Maintaining the harnesses and carts/wagons is a lot of work..

I met several awesome personalities, both horse and human.  I fell a bit in love with several of the horses and and I was happy to meet Percherons, Shires, Spotted Drafts, Belgians, Clydesdales, and a few Suffolks.  They were almost all very friendly and eager for a pat or a scratch.  It was an amazing experience standing next to these huge animals and experiencing their calm and friendly personalities.

The worst part of the weekend was the air quality.  The smoke and ash from the King Fire was prevalent and made it uncomfortable for everyone’s eyes and lungs, but it is September in California.

I highly recommend going to this event if you’re in CA, NV, ID or OR.  There’s plenty to see and do and we hope to attend next year as well.