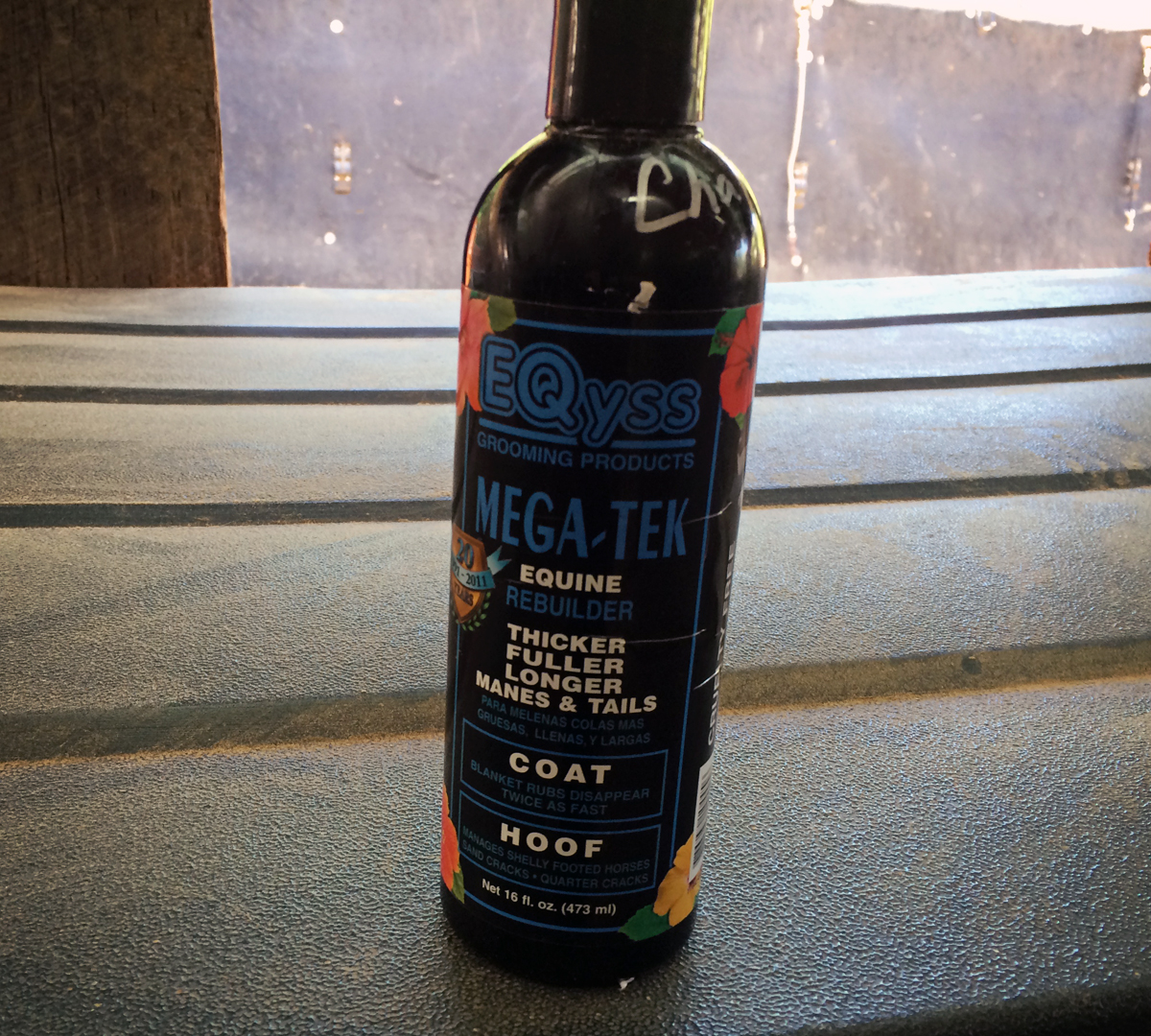 Epic disaster!  In late February I went to the barn one day and unblanketed Champ.  All looked fine and normal.  I started to groom him and as I ran a body brush over his mane…a large amount of hair came out.  I grabbed a stool and immediately went to look at it.   Everywhere I touched, hair dropped (up until about half way up his mane), but there was no evidence of rubbing it out…and there was no flaking, redness or anything else.   I immediately went to the wash rack and washed his mane, even in the chilly weather just in case there was something in it causing the problem.  More hair dropped.  You couldn’t touch the mane without hair falling out.  I went to an old stand by in the barn and used some MTG on it.   Within three days…he was basically bald.  Half of his mane was just gone (minus a few clumps that managed to make it).  I raged at the bottle of MTG for seemingly making it worse and threw it away.   I considered roaching the whole thing, but I was talked out of it.

I do not have a photo of the initial damage (as I was so distraught over the loss I wasn’t thinking straight) so I cannot show you the true horror.  Just know it was bad…and he was almost bald.  He never did loose the top half of the mane.  I never did figure out what caused the problem…and the vet and trainer were confused.  No bugs, no rash, no flaking, no rubbing…nothing.  He sat for a few weeks with minimal treatment as I had to rush out of town for a family emergency.  When I returned, it was no worse…but it hadn’t gotten much better.  I was gifted a bottle of Eqyss MegaTek Rebuilder in hopes that it would help make him presentable by his first show.  Thankfully, the product performed well enough to warrant a review! 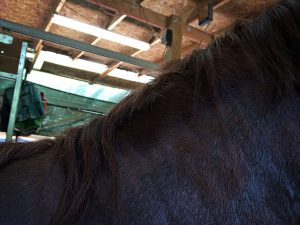 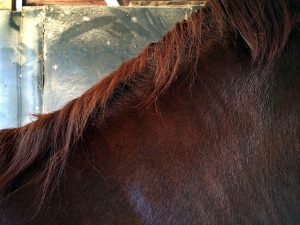 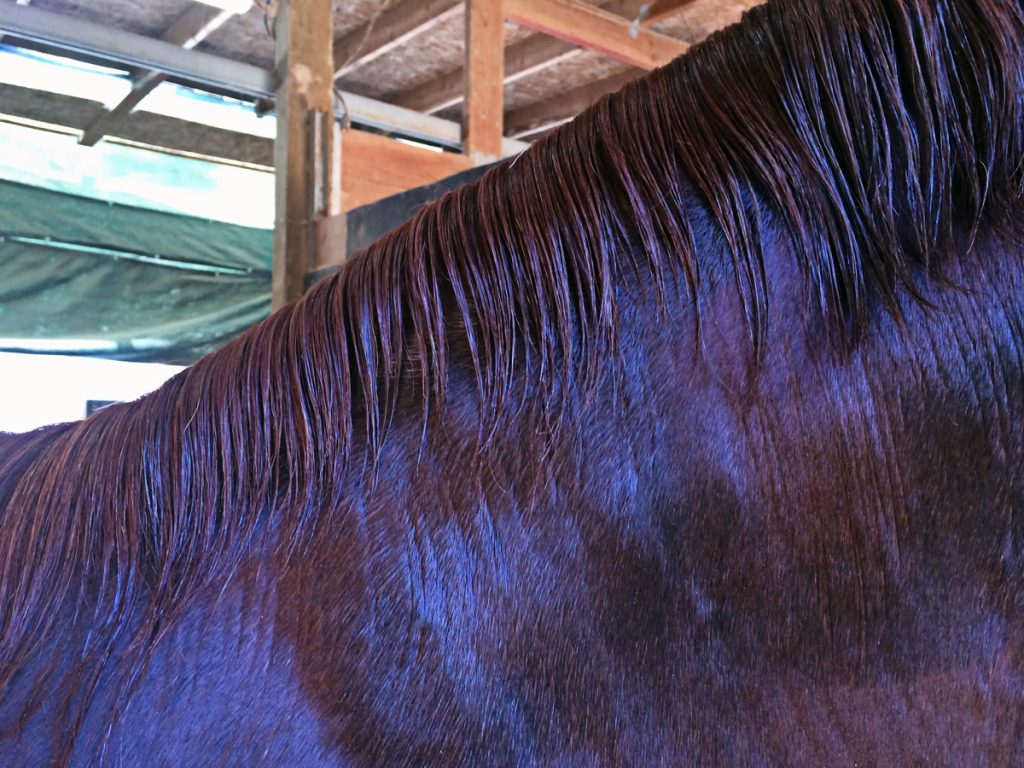 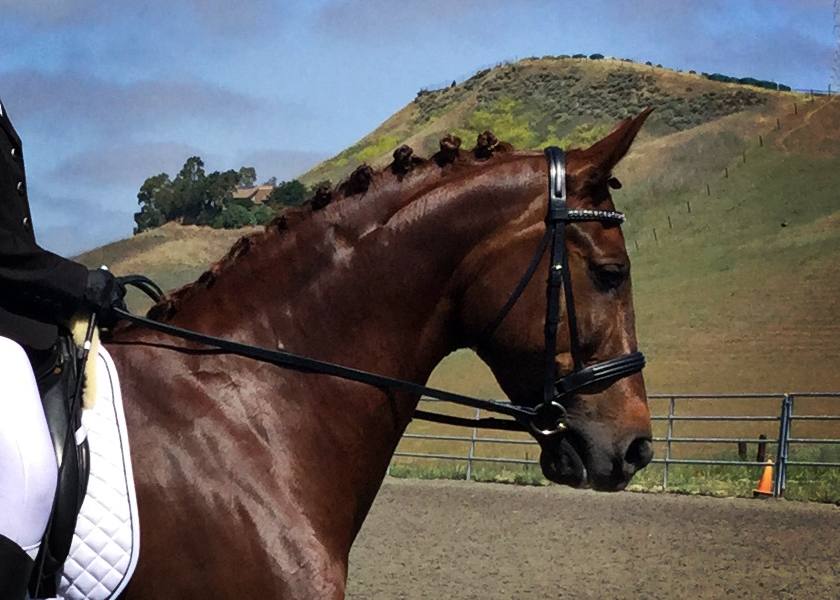 After three weeks using the Eqyss MegaTek Rebuilder, there was noticeable hair growth.  By week 5 it had thickened up considerably and was a bit longer.  By 8 weeks…I had enough mane to braid for the first show of the season (though not big lush braids…as you can see from the bottom half of the mane in the photo).  It has now been 17 weeks since we started the Eqyss MegaTek Rebuilder and Champ has a good three or so inches of mane where he had completely balded.  At first, I were applying this product daily.  After the first 3 or so weeks, I knocked it down to 3 days a week…after 8 weeks, I knocked it down to once a week as the urgency to have a mane for a show was no longer an issue.   The biggest results were in the first few weeks when I was applying the product more regularly.  As I tapered my use down, the results got much less drastic (however this stuff isn’t cheap…so I try and use it sparingly in non-emergency times).

Likely by the end of show season, he will have his full mane back.  I am hoping that whatever happened last winter was a freak incident that never occurs again!

I highly recommend Eqyss MegaTek Rebuilder for regrowing hair on the quick.