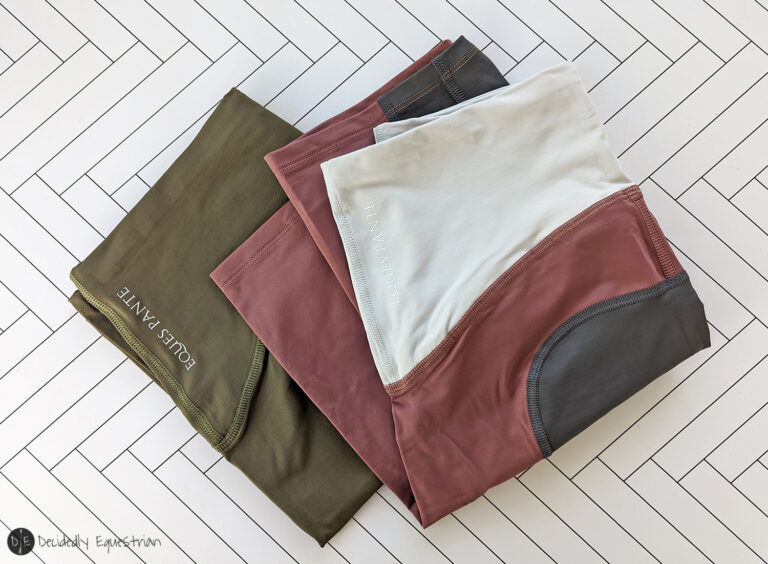 Rachel Masen·December 8, 2022
Reviews For The Rider
Eques Pante Review
Performance
10
Comfort
10
Sustainability Bonus
10
Customer Service
10
Quality
9
Value
8
9.5
When I got an email from Jessica at Eques Pante asking if I would like to review riding underwear how could I say no?  I mean…they don’t look like something I’d actively choose to wear under my breeches…I’ll admit.  But I’ve been on a search for decent riding underwear for…as long as I’ve been riding.  I’ve had more failures than successes, and for some reason unknown to me many underwear disagree completely with a lot of the breeches I ride in.  The fabrics just…fight, and that causes rubbing and chafing and distraction.  You know what I’m talking about right?  Have you ever had your underwear be so uncomfortable while riding that you have to stop in the middle of your lesson and apologize to your trainer as you dig your hands around your pants to make your underwear lay right?  I have.  It’s horrifying.  You can’t ride a nice half pass (much less a relaxed free walk) if your lady bits or bum are being rubbed raw and that’s all you can focus on.  I end up in that place more often that I’d like to admit (it’s even happened at shows).  I’ve tried padded underwear (great while riding… HORRIFIC while walking around).  I’ve tried synthetic sport underwear (fighting with breech fabric, bunching, giving me buttne or saddle sores).  I’ve tried period underwear (which I still wear during that time because the alternatives are worse…but holy-moly uncomfortable rubbing Batman!).  I’ve tried regular cotton granny panties (which are actually are the most comfortable…but the most obvious for causing panty lines and can bunch in uncomfortable ways sometimes).  There just isn’t any good damned underwear out there. 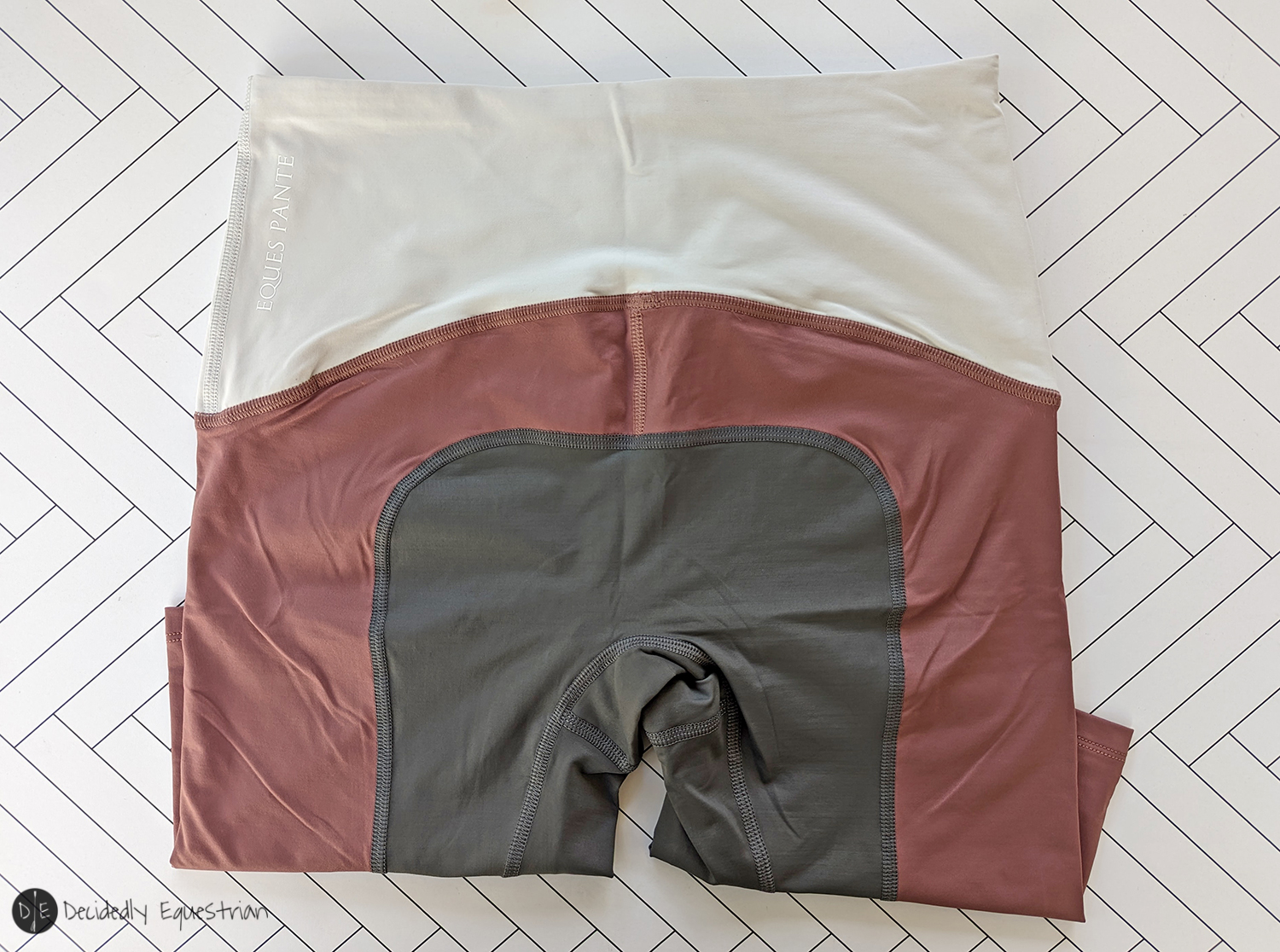 And then I tried Eques Pante.   They are SO much better than anything else I’ve tried.  In multiple kinds of weather they shine.  In hot weather, they are breathable and actually help prevent that moment where you can’t pull your breeches back on after you go to the bathroom, and you have to do that wiggly dance to get back in them (you know what I’m talking about).  I have worn them in quite hot weather (90s) with no discomfort.  Ditto they’re lovely when the weather cools down adding an extra layer of warmth.  I’ve been able to extend the use out of my hybrid breeches (which typically are relegated to summer) by wearing these underneath.  I’m much warmer that way.  I also have not had a single saddle sore, rub, rash or pimple since I started wearing these (whooohooo!). 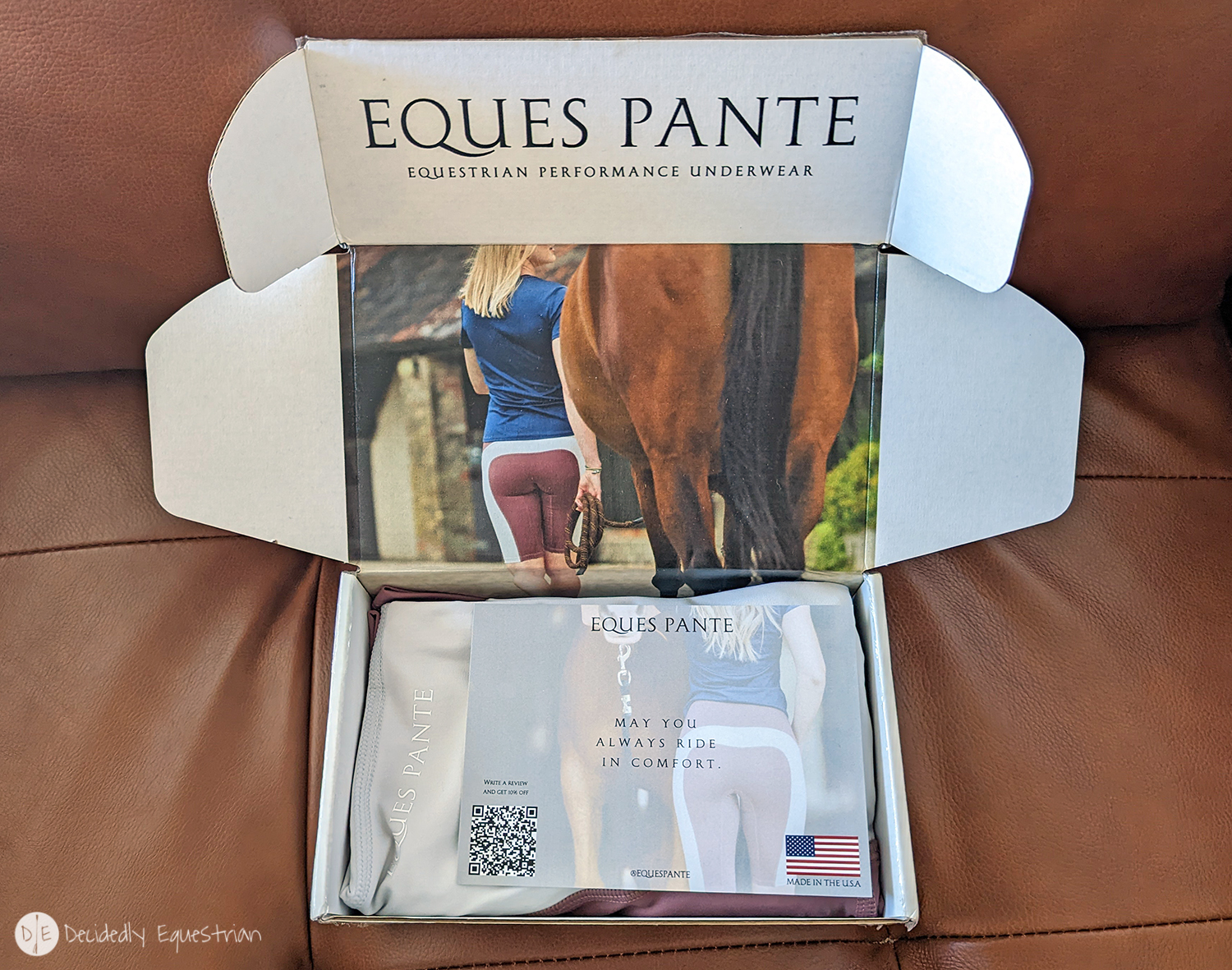 How do they ride?  Well when I ride in them…I don’t feel them.  I don’t at any point remember underwear even exists…which is EXACTLY what I’ve been looking for while focusing on being in the moment with Jax.  Literally…they ride like I’m not wearing underwear at all and I love them for that.  They also (which I didn’t really consider before) have this interesting design in the tummy area that looks a little strange…but my lord!  It holds in my mommy tummy (but doesn’t feel constricting at all like some riding shapewear I’ve tried before).  Hallelujah!  Ha.  Not necessary or required for comfort for riding…but they make me look better in the saddle too so that’s just a huge bonus.
I had one pair of hybrid breeches from Free Ride that did NOT work with the Eques Pante at all (though all the other ones I have from that brand worked well…the fiber content was a little different on these and the crotch area was cut a bit weird, so that might be the difference).  They have worked well with every other pair I have worn them with…from Free Ride Lux, to Montar, to Goode Rider Jean breeches, to Le Mieux, to Nikovian.
For me personally, I have a lymphatic problem that causes my legs to retain a lot of water and swell, so I 100% can always see the line on my leg from the Eques Pante (some days worse than others)…but my socks also leave horrible indentions on my calves too you can see through breeches…so I’m kinda used to that look.  This isn’t going to be a problem for most people, but for me…you can see them under my breeches where they hit above my knee.
They so far have washed and dried easily and well.  I had a problem with one pair having faulting stitching after one wear and Jessica promptly sent me another pair.  The quality on the other pairs have been perfect (we all know manufacturing mistakes can happen, so her customer service on this was excellent).  I’ve been wearing them weekly since I received them, so I’ve worn each pair a handful of times.  They are made in the USA and use sustainable fabric, which is a cool extra thing that might be a deal sealer for some people.  On sizing, they run basically true to size or maybe a hair large (they are stretchy so forgiving).  I got the large, but I could probably get in a medium. For reference, I’m 5’9” and I wear a size 10 in jeans, Large in Free Ride Tights and 32 in breeches. 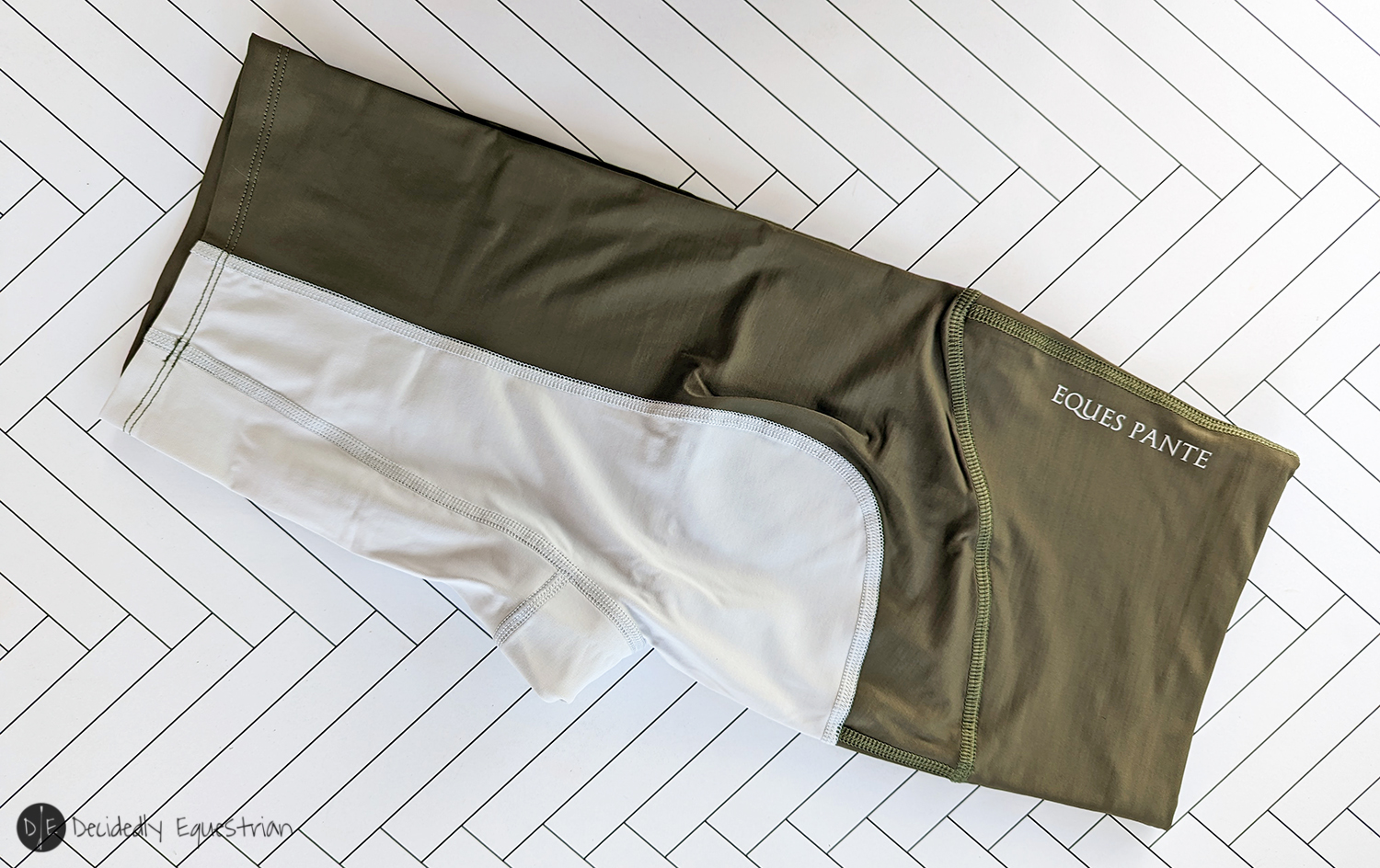 The price on them is not budget, but right now you can get several of the styles on sale which make them much more doable.  I mean…I can get some of my riding tights for the same price as the underwear…so they’re an investment.  However I do think that they are a high quality, comfortable product that solves a lot of problems many equestrians have, so I have to recommend them if they are in your budget! And for what it’s worth, it is for sure a repurchase product for me.  I’ve already gone back on the website and ordered more from Eques Pante! There’s a little bit of a sale for the rest of December as well, so head over there if you’re interested!