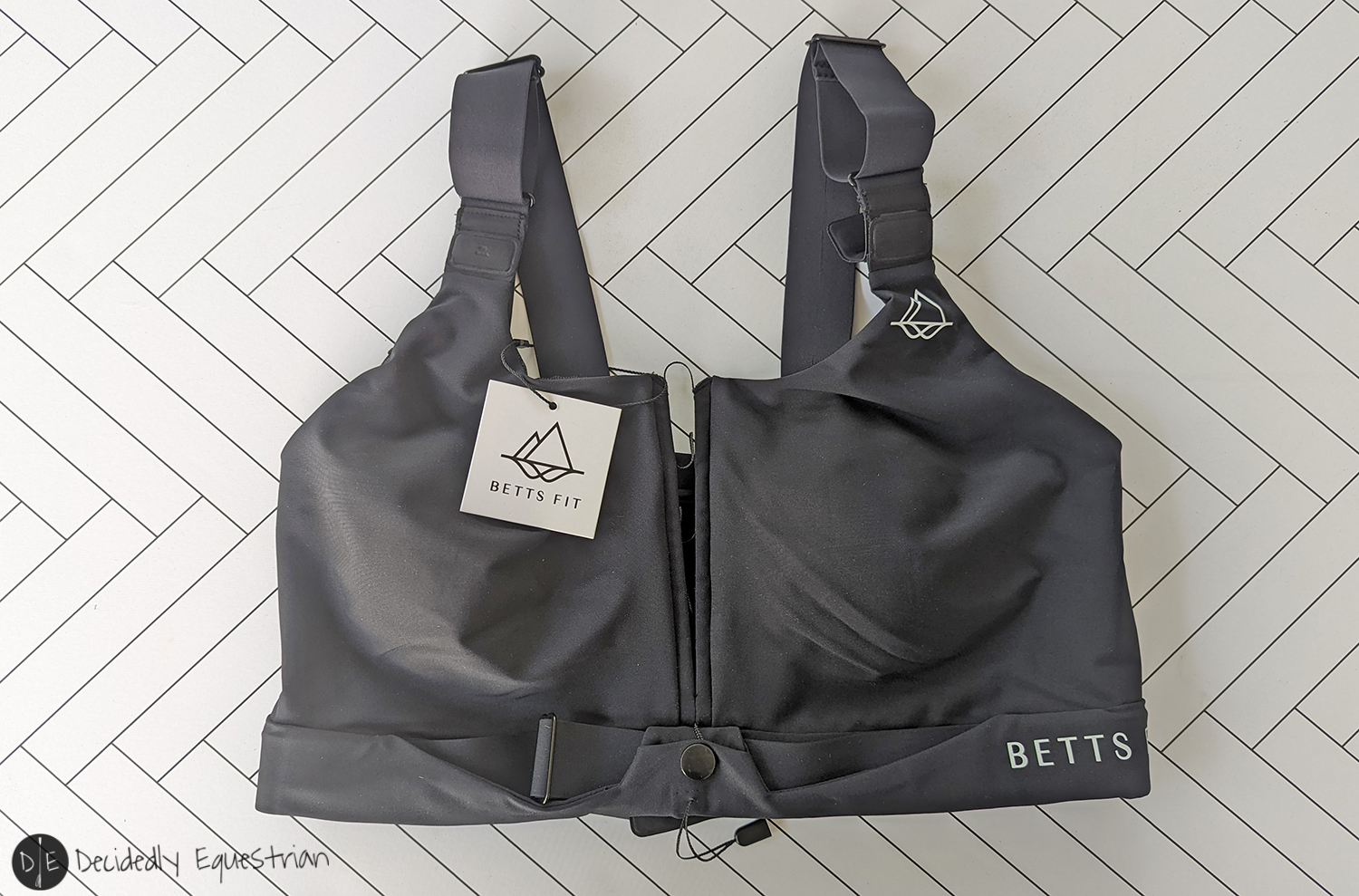 When I got an email about trying the Betts Fit Bounce Free Sports Bra, I was a little dubious…and also excited.  The last very expensive, strap those girls down sports bra I tried ended up being a waste of money and they sit…unused…in my dresser.  I have little hope for real compression type bras as they tend to be uncomfortable to the point of…”what’s the point?”  Seriously…if I’m so uncomfortable in my bra the entire time I’m wearing it, having less support and being uncomfortable for the 30-45 minutes I’m riding and getting bounced around…well…the trade off just isn’t’ there for me.   So as mentioned…I was curious, interested, excited…but also…doubtful. 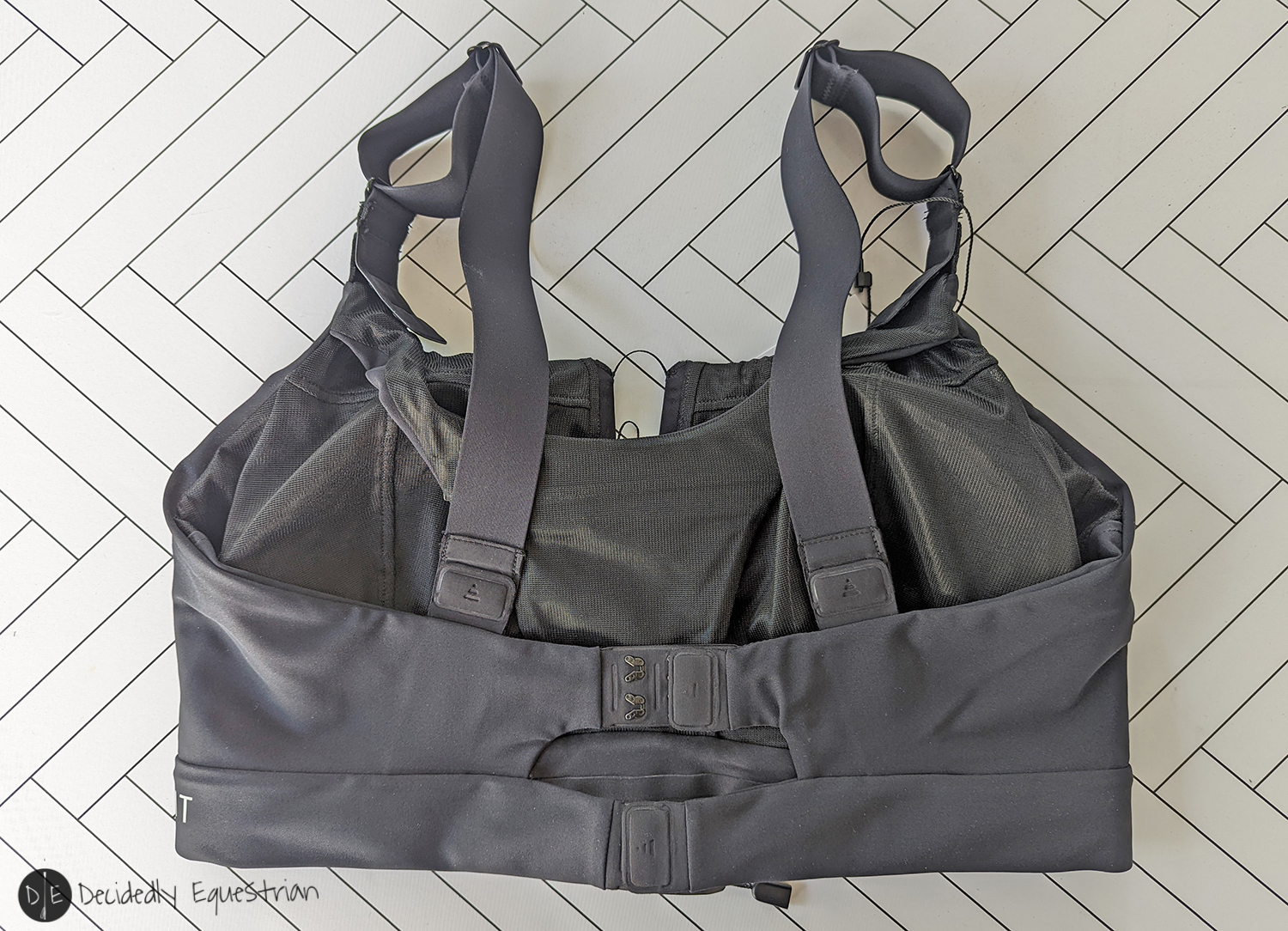 First and most important was getting the sizing right.  It’s not quite like a regular bra sizing (I ended up going up a size from my typical underwire), but I measured and measured and sent some photos and talked it over until we landed on a size.  She was spot on.  So take that little bit of extra effort when buying from Betts Fit the first time to know your size…it will be worth it. 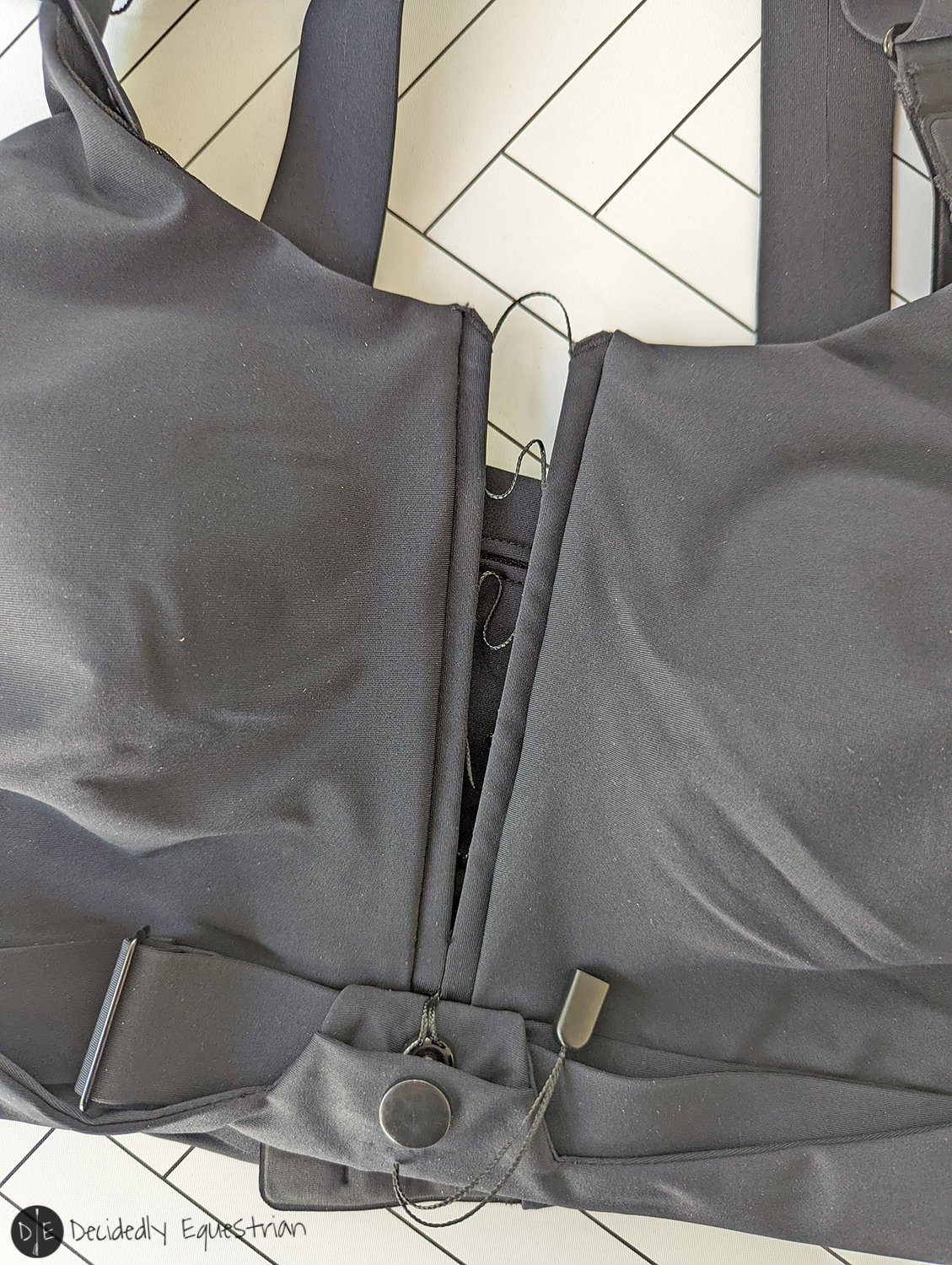 The corset system close up.

I was super surprised when the bra arrived because it was very lightweight, felt fairly unstructured, and didn’t look like anything that might strap me down (like other types of bras I’ve tried in this category).  The fabric is super soft, the straps aren’t abrasive, and it’s very thin and lightweight.  VERY.  Wow.  So I tried the bra on very curious and I was impressed immediately.  The fit was perfect…spot on.  I had a little trouble figuring out the clip system as it’s different from normal bra hooks, but after a few wears I have it figured out now and I quite like them.  They’re incredibly easy to clip on and off, but also somehow very secure.  Clever hooks.  The fabric again (I can’t say enough about how lovely it is) is super thin, soft and comfortable.  I was surprised how comfortable it is and yet very supportive.  Magic fabric.

Then I played around with all the options. The different shoulder strap configurations.  The tightening/loosening of the band (which you can easily do while wearing it and it’s in front).  It’s easy to add enough support there…but not doing too much (unlike another brand I won’t mention by name I struggled with a feature with a similar purpose).  The corset system is very clever…and may be my favorite part…or…maybe it’s how comfortable the fabric is…uncertain. 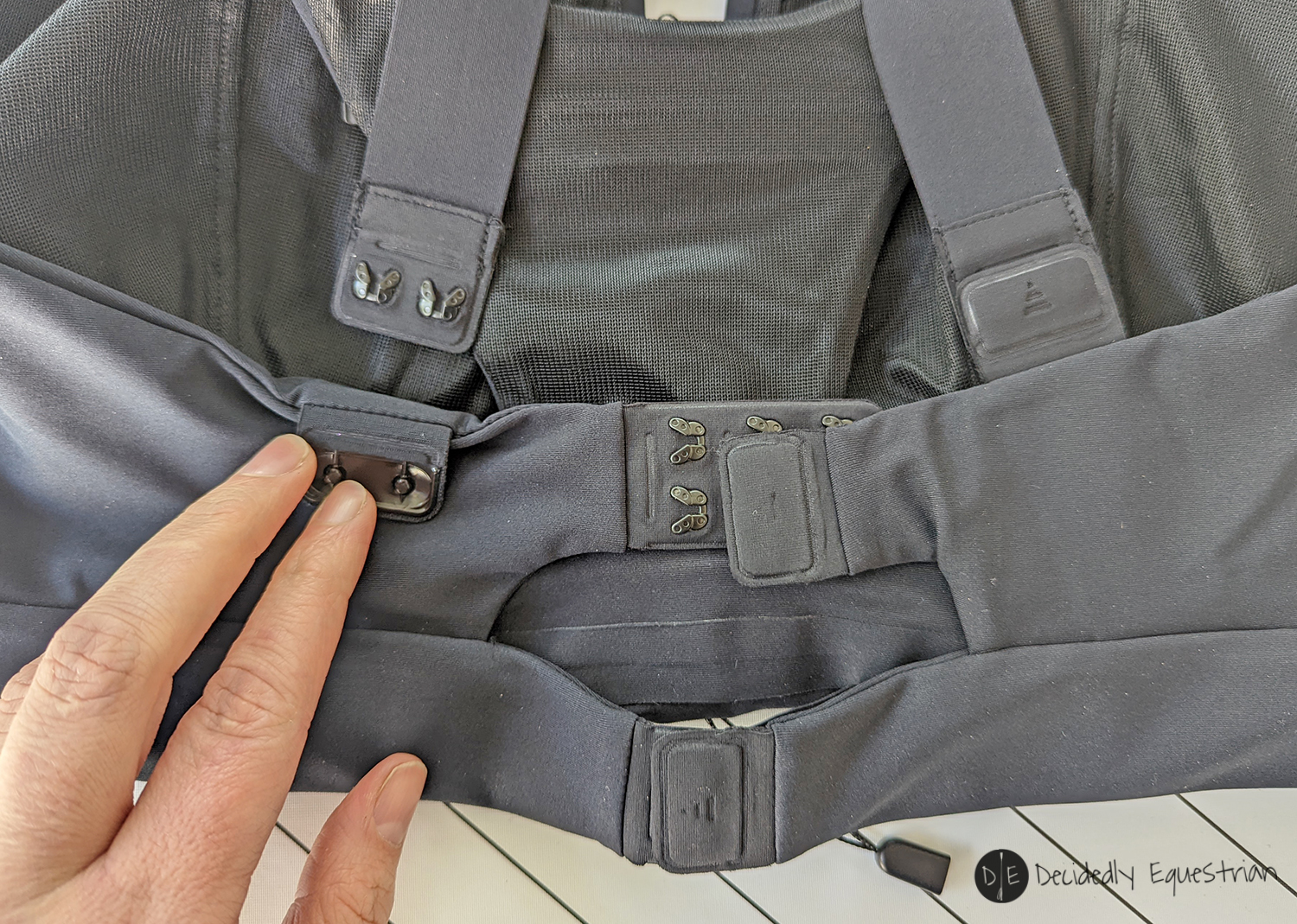 The different bra clip system mentioned. Tricky initially, but I wish all my bras had these now.

The corset lacing is a little trickier to use than the other adjustment features and it doesn’t always loosen up without some tugging (so I hope that that feature holds up).  Could be just my specific bra…could be a design intention.  Either way it doesn’t just pop open when you release the corset button, you have to work it open a little bit.  I find it clever and delightful to be able to add and take away compression right before I get on and after I get off Jax so that I can be comfortable while grooming and fiddling around on the ground while still getting good support in the saddle.  I lifted up my shirt and showed my bra off to my trainer as she was asking what I was fiddling with.  LOL.  It’s a cool mechanism. 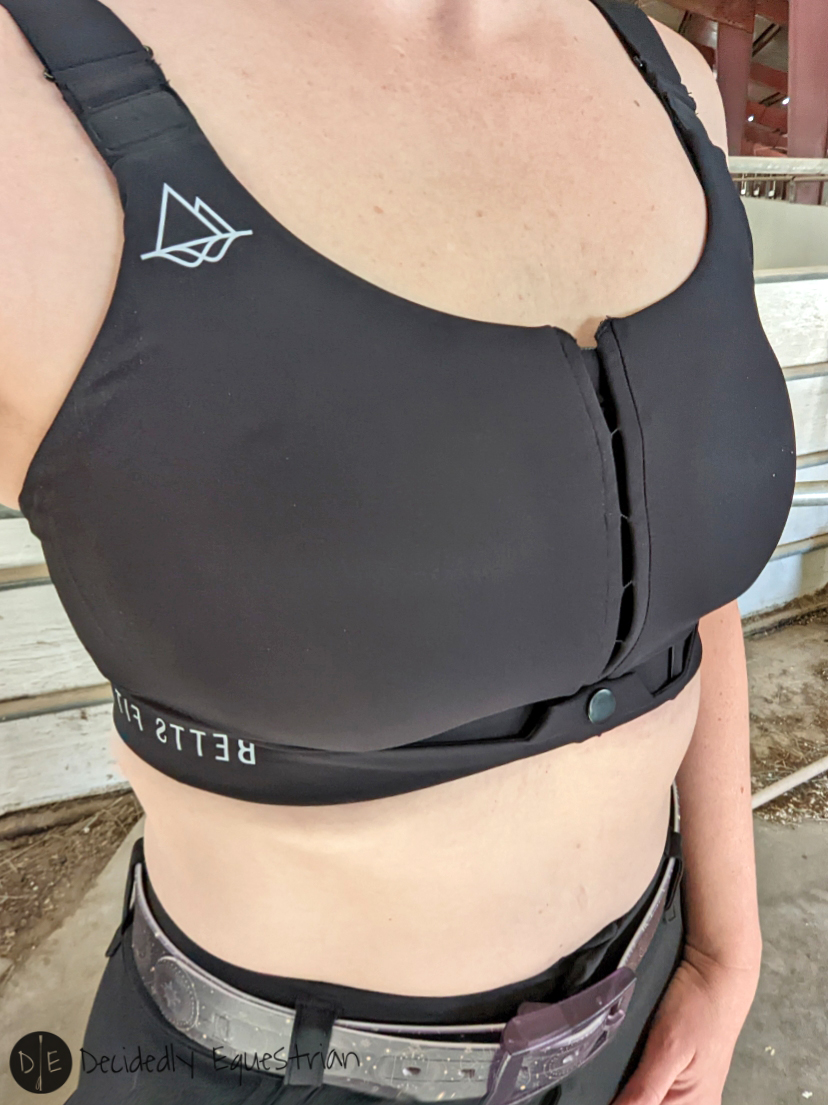 The easy adjust-ability while wearing it is something I never knew I needed or wanted.  One minute I have strong support (while still comfortable)…the next minute I can have yoga/laying on the couch levels of support and comfort.  Very clever.   If I had more of these bras, I’d stop wearing the other ones I have.  Doesn’t dig in or rub anywhere (unlike a well marketed competitor of theirs which has given me skin tags, abrasions, fabric burns and lots of discomfort…).  It’s super easy to put on and take off without any acrobatics and doesn’t get stuck on you when you sweat a lot. 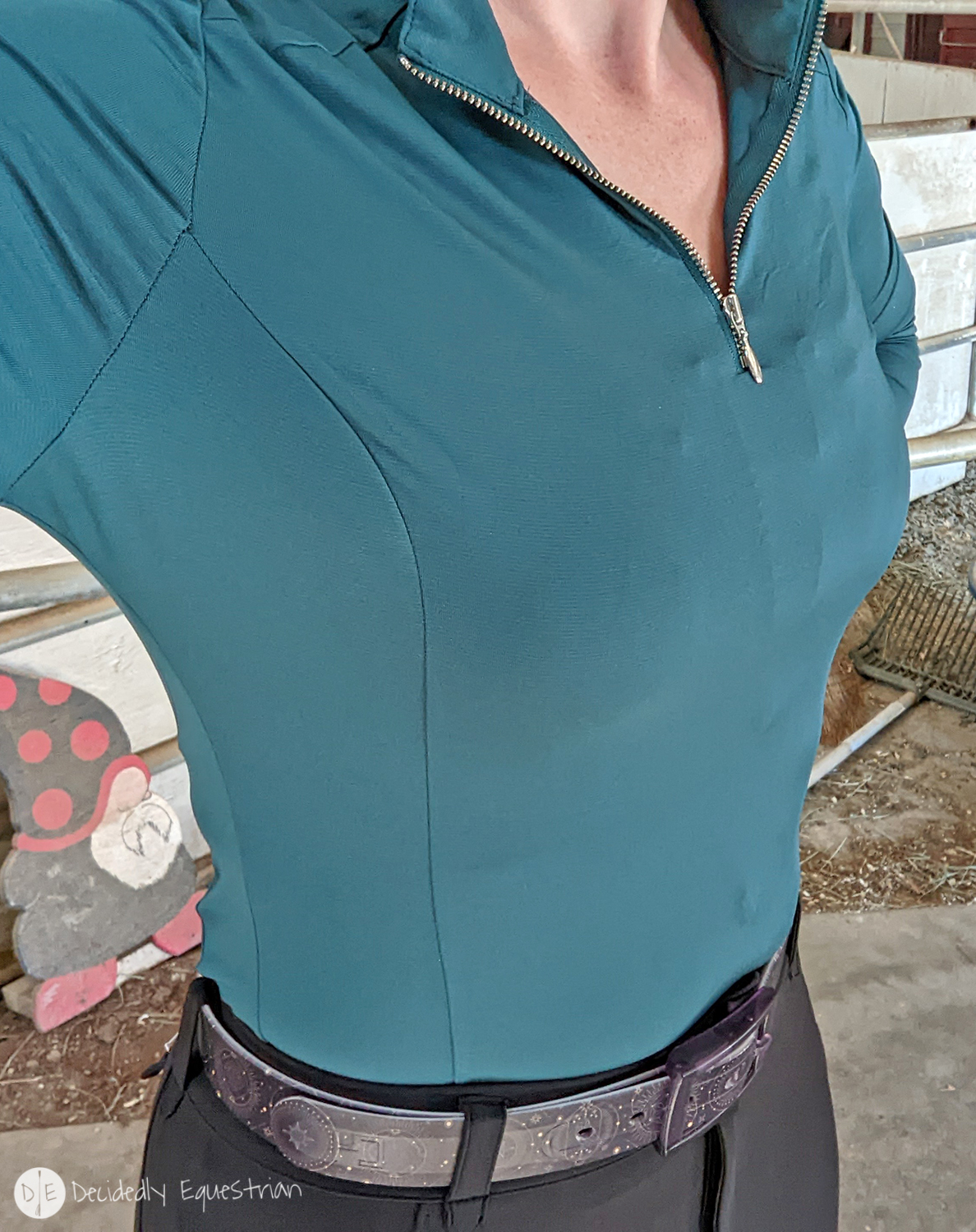 It looks fine under clothes.  It doesn’t give quite the dramatic gross boob squish uniboob that other support bras do (or force the tissue into your armpit or give you back fat rolls).  Part of that probably has to do with the fabric used and design…and part due to the extra effort that went into the fitting process.  Now it’s not going going to make you look like a Victoria Secret model from 2002, but it’s not nearly as offensive under clothes as many of these types of bras can be.  There is a zip pocket that is super handy if you’re going out for a run or walk to put a key or a card in, but doesn’t hold a lot else (and isn’t particularly necessary for riding). 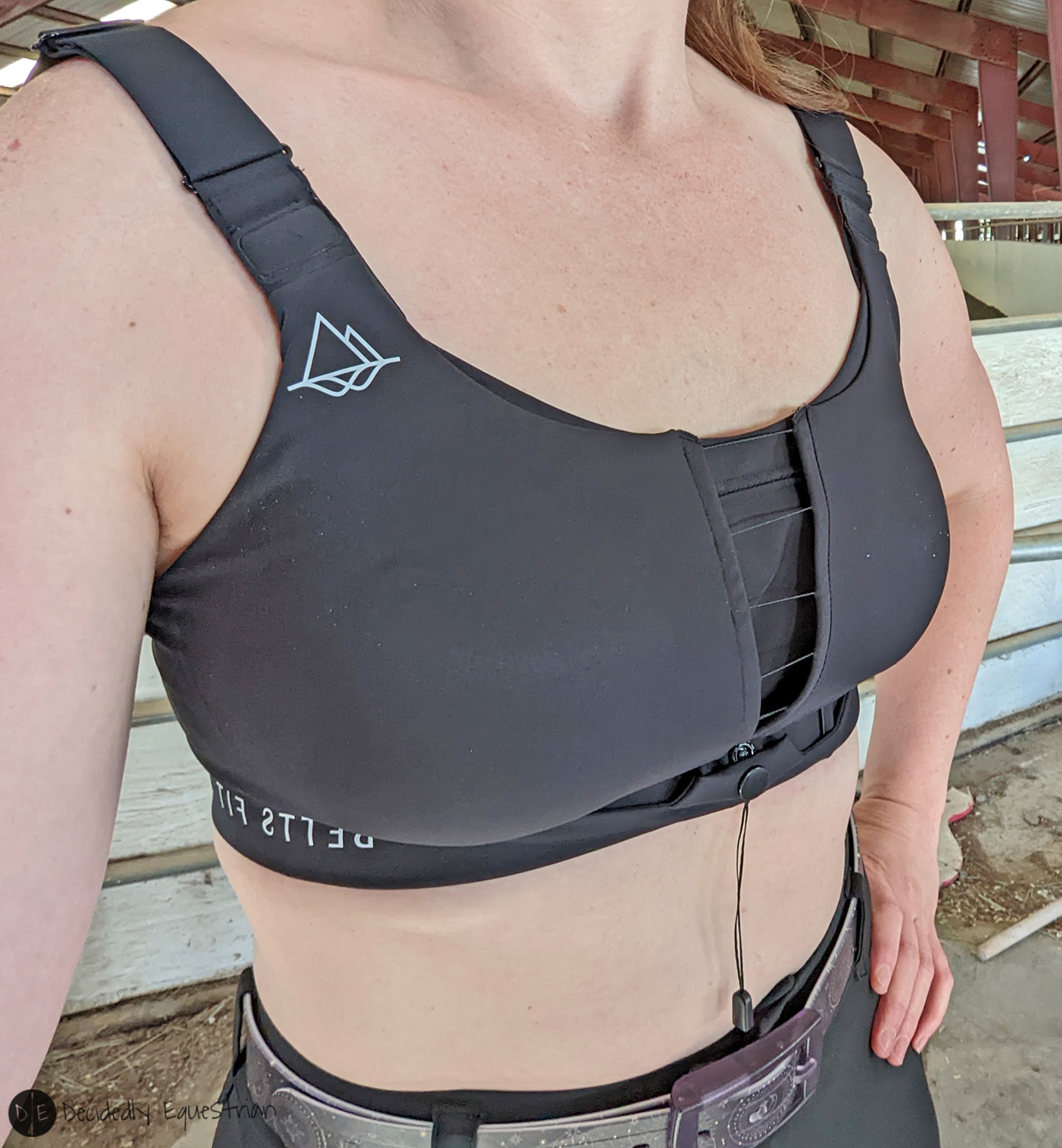 It washes well and dries quickly.  I put it in a garment bag as instructed…but I admit I failed to do that once and it turned out fine.  I also that same time accidentally put it in the dryer (on low)…and it came out like new too.  Granted I know that will break down the fabric over time…so I’m careful not to do that…once didn’t kill the bra. 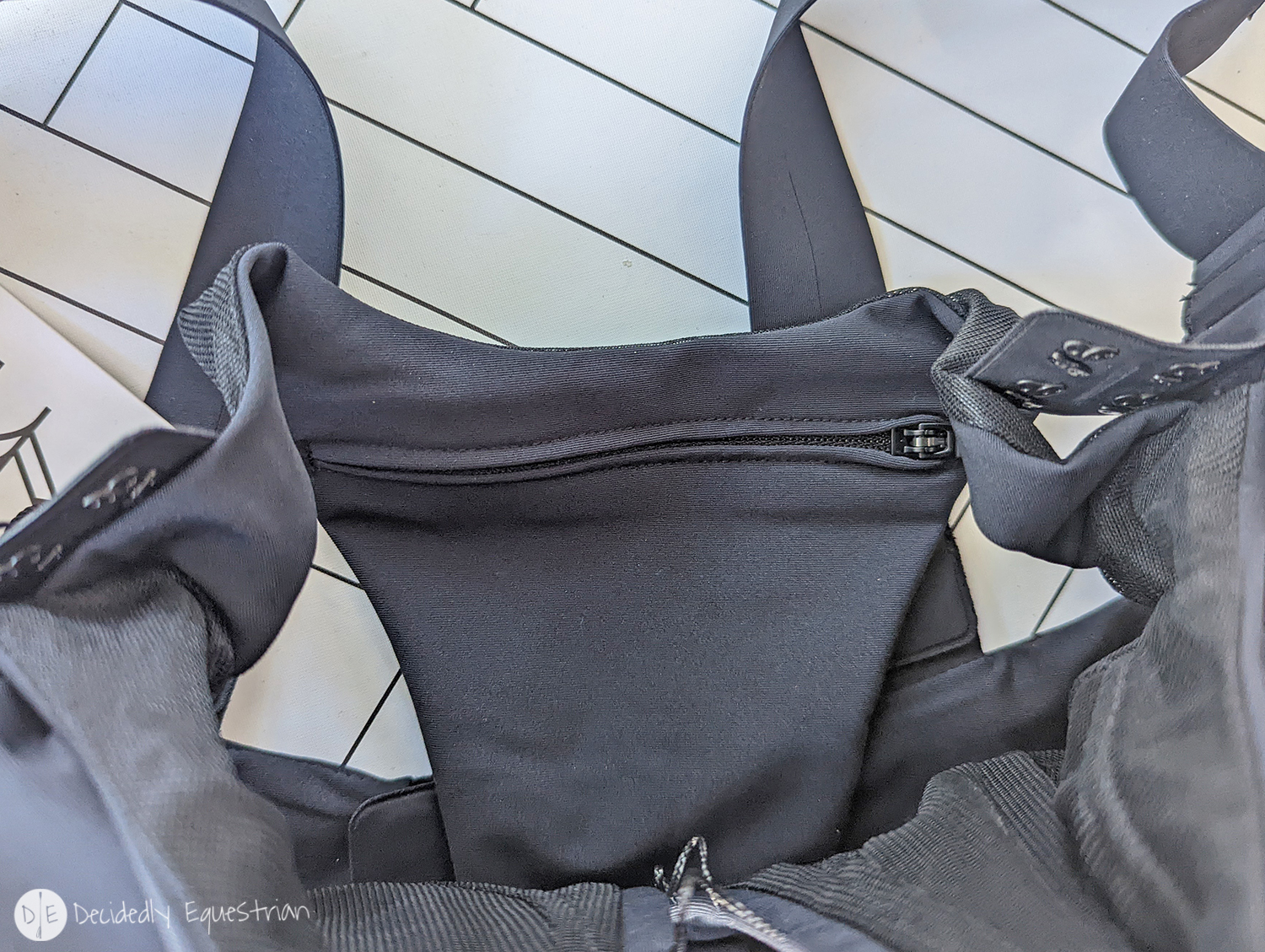 As for how it performed under saddle?  Well I have worn it once a wash cycle since, and I’d wear one every day I ride or work out if I had more (honestly…I’d wear it around the house too…).  It’s so comfortable it doesn’t bother me during riding.  It’s so supportive, I don’t notice or find myself caring about my boobs at all.  Just like I desire it to be.  My only complaint is that there are not any other colors yet!  I’ve already asked her for a white or light colored one to go under show shirts.  I’m looking forward to spending my money and buying some more of these bras!  I think the price is spot on for what you’re getting!

If you’re an A or B cup, sorry girls…this one is isn’t’ for you…but then again you don’t need the compression much either (I don’t need a ton either at a larger C compared with some of you ladies).  Betts Fit carries size C – G with band sizes 32 – 40.  There’s also an additional Bounce Band you can add to the bra for even more support for sizes DD-F.  There’s also a tank that hooks onto your bra if you like that option.  Looking forward to continuing to wear mine and hopefully get some more colors in the future! 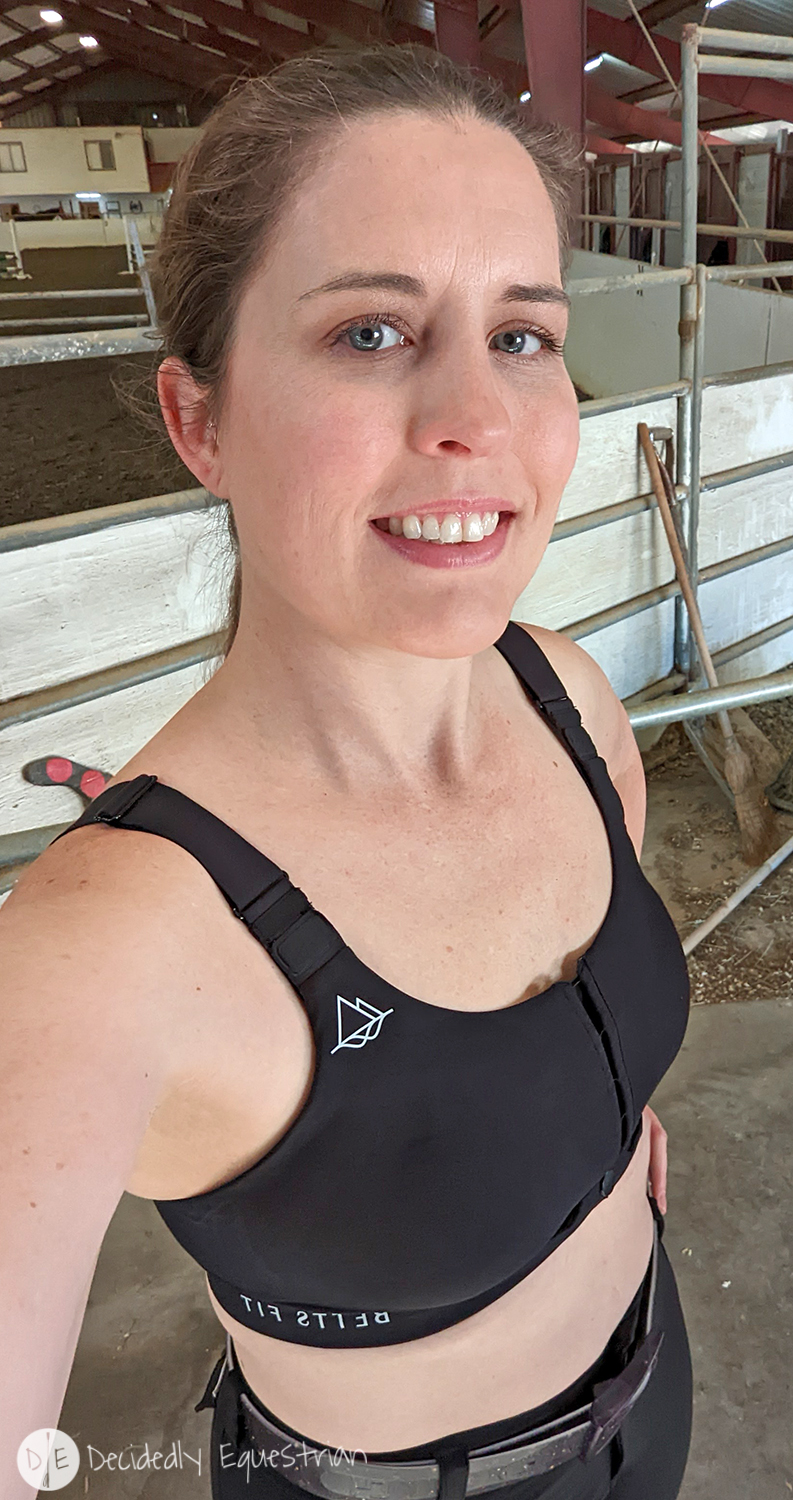