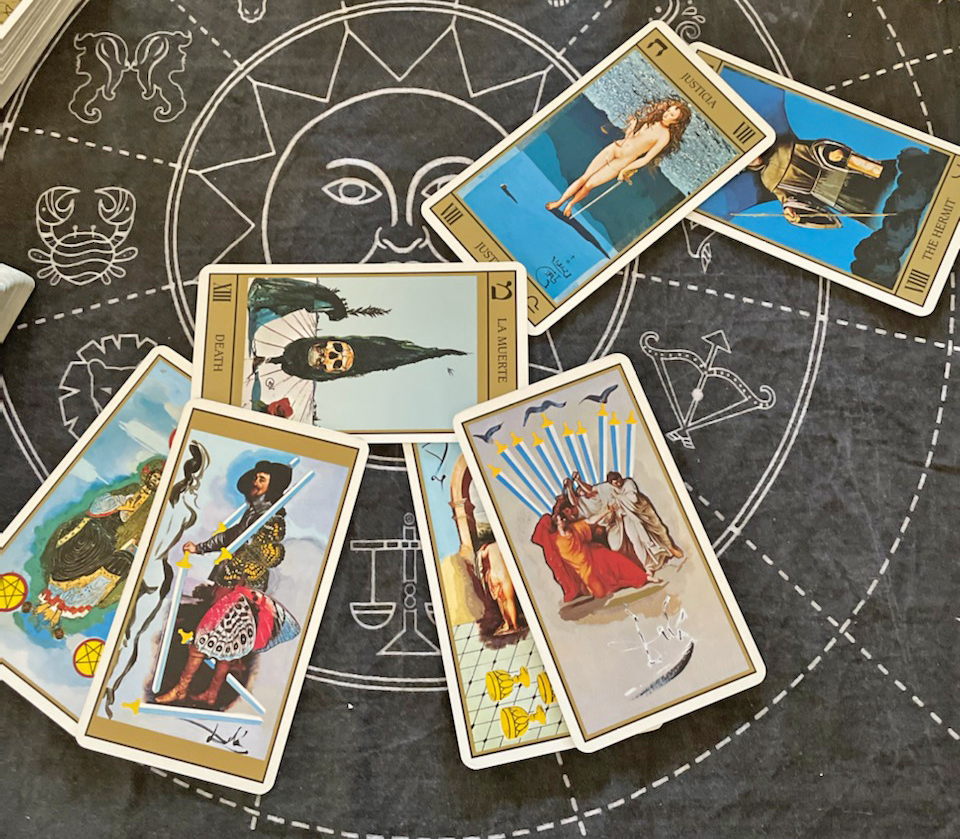 I got a Tarot Reading for Jax!

I mentioned some of this in my Wednesday blog this week…but this week I did something I haven’t done in  years…I had a tarot reading for Jax.  Yup…you heard that right.  I did a blog on Nina Fox several years ago now on her horse readings if you want to check that out.  If your not sold on the horse readings, she does a free weekly Tarotcast you can sign up for (let me tell you…she’s often spot on…to the point my husband’s cards have clued him in to some pretty ridiculously accurate (and sometimes dramatic) things).  Start with those and see how that weekly email goes for you.

Anyways…we did a reading for Jax and first thing…she gasped when the cards went out.  She said in her years of doing these horse readings, she’d never gotten a horse that had pulled 3 higher arcane cards (she said she doesn’t remember ever drawing more than one in fact).  And even more significantly they were all along his spine.  Buckle up for this one guys…(she knows NOTHING about Jax…and thought I still was riding Champ it’s been that long since I talked to her).

The first thing she said was she’d talk about the legs as they were less complicated.  Everything is going great on the left legs she said.  She said something was going on on his right side.  She was uncertain exactly what, but it seemed both front and rear.  He drew swords on both legs and both can indicate pain.  The front card indicated something “loosy goosy,” indicating a balance issue.  The rear card indicated something was not aligned and there was an imbalance or weakness there (she suggested maybe his hip).

Before I go on, I will mention he’s he’s been having issues in the left lead canter for me…so having something going on in the right hind would make sense for that.  Chiropractor needs to come out I guess.  The front is interesting as nothing is visibly showing there…but perhaps a symptom of the other things we have going on.  However I will mention that in my clinic the other day, I was told more carrot stretches to the right and he really needed to loosen up on that side. So there’s probably something to this.

Now on to the interesting stuff.  Those three higher arcane cards when they occur on these sections of the body indicate some interesting things.  She said he must have an extremely strong personality…he does.  Lol.

First the head.  The head card describes the personality of the horse and how they present to the world.  He got the Hermit card.  Which indicates he is an introvert and can pull in easily.  He likes a good idea of what he’s getting into (so introduce him to new places).  He likes to have a plan and have perspective.  He doesn’t like other horses generally.  He can be a bit of a worrier, but he’s introverted about it.

What Jax is actually like…well I always thought the opposite.  I always thought he was confident and the boss.  Brave.  Why?  He never really does anything.  Minor spooking.  However…once I hear this a lot of things click into place.  If he’s a true introvert…he’s not going to act out dramatically.  He’s going to be very interior.  So a lot of his behavior…both on the ground and under saddle completely indicates a horse that is very interior…and keeps the stress on the inside (and is way more worried all the time than he initially appears).  Based on my two years with him…and not understanding this…so much is now clear.  He isn’t great with other horses and often pins his ears, kicks out at them, lunges as they walk by and is very defensive of his space/paddock.

I am going to try to start riding him and working with him as if he was a worried horse…rather than a confident, fearless one.  I’m curious how much that is going to change for our relationship.

The neck card indicates more personality traits in this instance.  He drew the Justice card.  Which she said meant…everything has to be his way.  His way or the highway.  Huge opinion on everything.  Headstrong.  Pushes back.  Needs to know what is going on and he is willing to work with people…but he will not abide some people.

This is Jax to the 100000%.  He has a huge opinion…and has a very real sense of what he thinks is acceptable and what isn’t.  Hilarious to me she got all this from a card.

The back card indicates how he works with others.  She said based on the first two cards…it’s quite a scary horse…but with this card it indicates hope.  He drew the Death card…which indicates organic change (not anything having to do with actual death).  It indicates that Jax is slow to change, but change can happen.  He needs mini-steps to learn anything…not big leaps.  Progression has to play into his “his way or the highway” attitude.  If you do anything too fast, he’s going to stop on you and not work with you.  He is highly food motivated and treat training will work well for him.

So all of this really was a great insight on Jax…and where we are currently…and relevant to what is going on.  I need to slow down.  I need to back up to a point where he was willing to work with me and try a slower progression.  I need to help him feel more confident and less worried.  We need to get him more balanced and comfortable on the right side of his body.

Again…I haven’t talked to Nina in YEARS.  She doesn’t know anything about Jax and thought she was still reading for Champ…which has been…almost 5 years past.  That she could give this kind of insight on an animal she’s never seen or met…to a person she has rarely communicated to is pretty amazing.  If nothing else…it’s a good bit of fun…but there were some really helpful discoveries in this reading for me and I need to not wait so many years between next time.