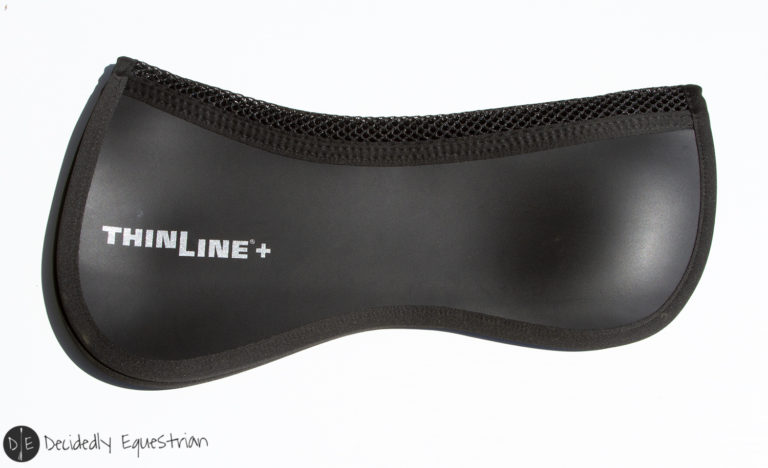 So I’ve already written a rave review on the ThinLine Basic Half Pad, so when I heard there was a new half pad coming out and offered to test it I was excited.  I was also pretty sure there was no way it could be really any better than the original right?  I mean…how do you give a better score on something if you’ve already given the perfect 10?  Well…I it was another case of I didn’t know what I didn’t know…and boy it’s a fabulous half pad.  If this tells you something…I’ve not even seen my Basic Half Pad since I got this one.  It’s in a closet maybe somewhere… 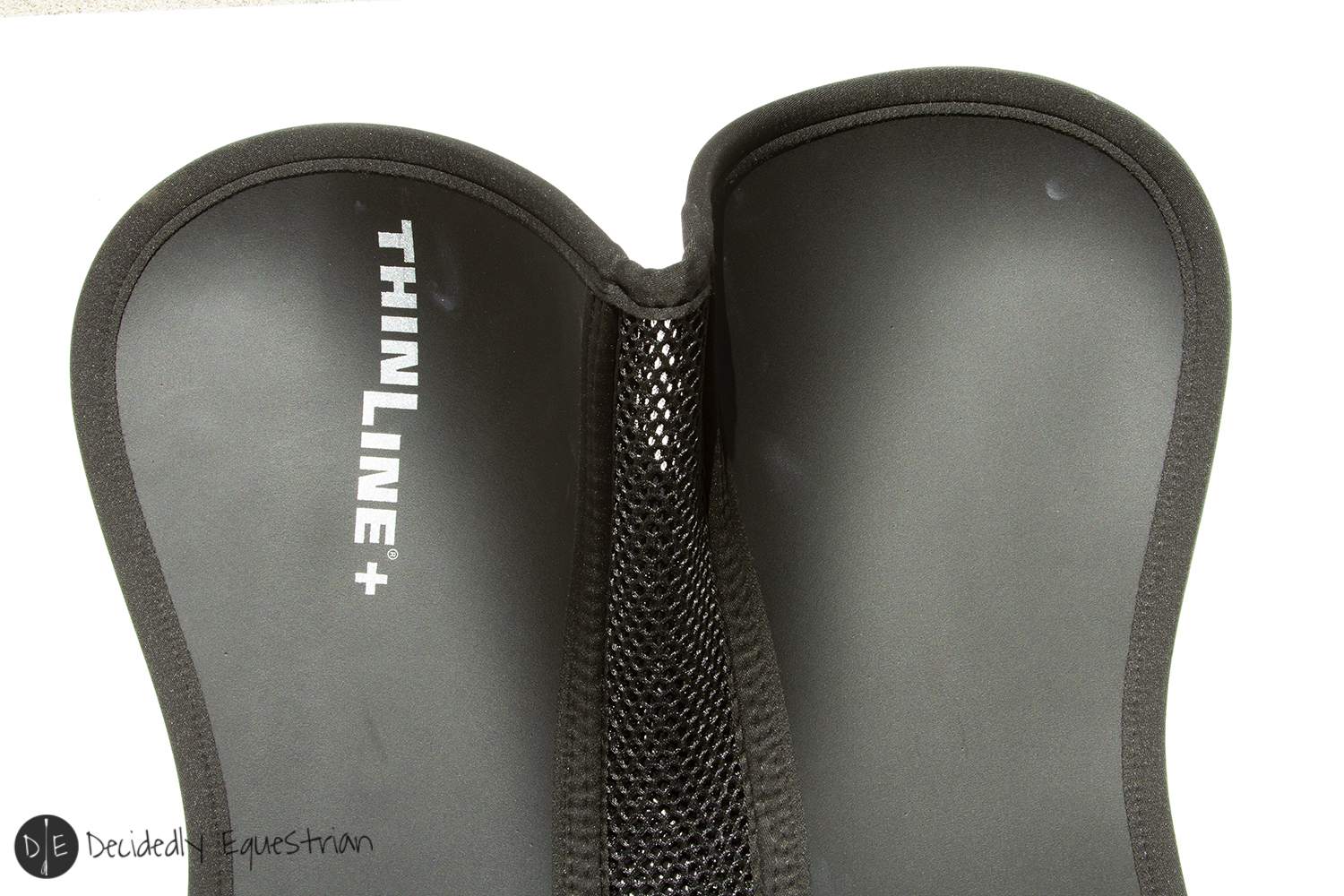 ThinLine Perfect Fit Pad is a brand new half pad from ThinLine.  Like…just released this last weekend new (I’ve had it however for about a half a year or so, so I’ve had plenty of time to use and abuse it).  It’s the same material and benefits of the original ThinLine material pad.  Same awesome shock absorbing powers.  The same thin profile, so it doesn’t mess with saddle fit.  I switched to my ThinLine after Jax was coming up a little sore in his back last year and it has made a big difference (as well as some physio for him).  I love the original one for the reasons above and that it’s sturdy and easy to clean.  However, because it’s a solid piece of the ThinLine, the original pad could pull over the withers if not adjusted just right and I did often pull this off of him sweaty.   Those “problems” were so minor I didn’t really account for them being problems in my review.  They were just the way things were using this material.  No worries.

As minor a change as it may seem, that little mesh panel at the top has made major adjustments to the way this pad works.  The fit has gone from great, to perfect.  Jax has his saddle regularly looked at and adjusted by our local Custom Saddlery rep, so I never want to put anything under it that will mess with the fit (as a side note, when I switched to the ThinLine from the sheepskin last year, she was happy I did it and said ThinLine was a great option to add protection without messing up expensive fittings).  This pad makes absolutely no change to your saddle fit and the mesh panel creates a structure to the pad that lifts the channel of the pad up into the gullet of the saddle.  No continued adjusting or fiddling required.  No worries about too much pressure on the wither.  It just naturally goes up into the channel of your saddle and puts the shock absorption where you need it, not where you don’t.  The pad fits perfectly and doesn’t mess with my saddle fit!  It doesn’t get any better than that.

And like the original, it’s so unobtrusive under the saddle that using it for a show is no big deal, even in black.  It still looks clean and nice.

The mesh channel also has another major benefit – breath-ability!  I have noticed since I switched to this version, Jax’s back gets less overheated/sweaty.  I mean…when it’s 100 degrees outside he’s still dripping wet everywhere, but on an average day there’s significantly less sweat under the saddle and I notice that the half pad doesn’t seem to gather sweat and salt like the solid version did for me.  It makes sense.  A solid piece of ThinLine on your back isn’t breathable and will for sure add to sweating.  Of course!  But this channel breaks up the solid piece giving air a place to go.  The mesh is the same material as that fancy pad I reviewed a couple of years ago and it’s a super interesting material! 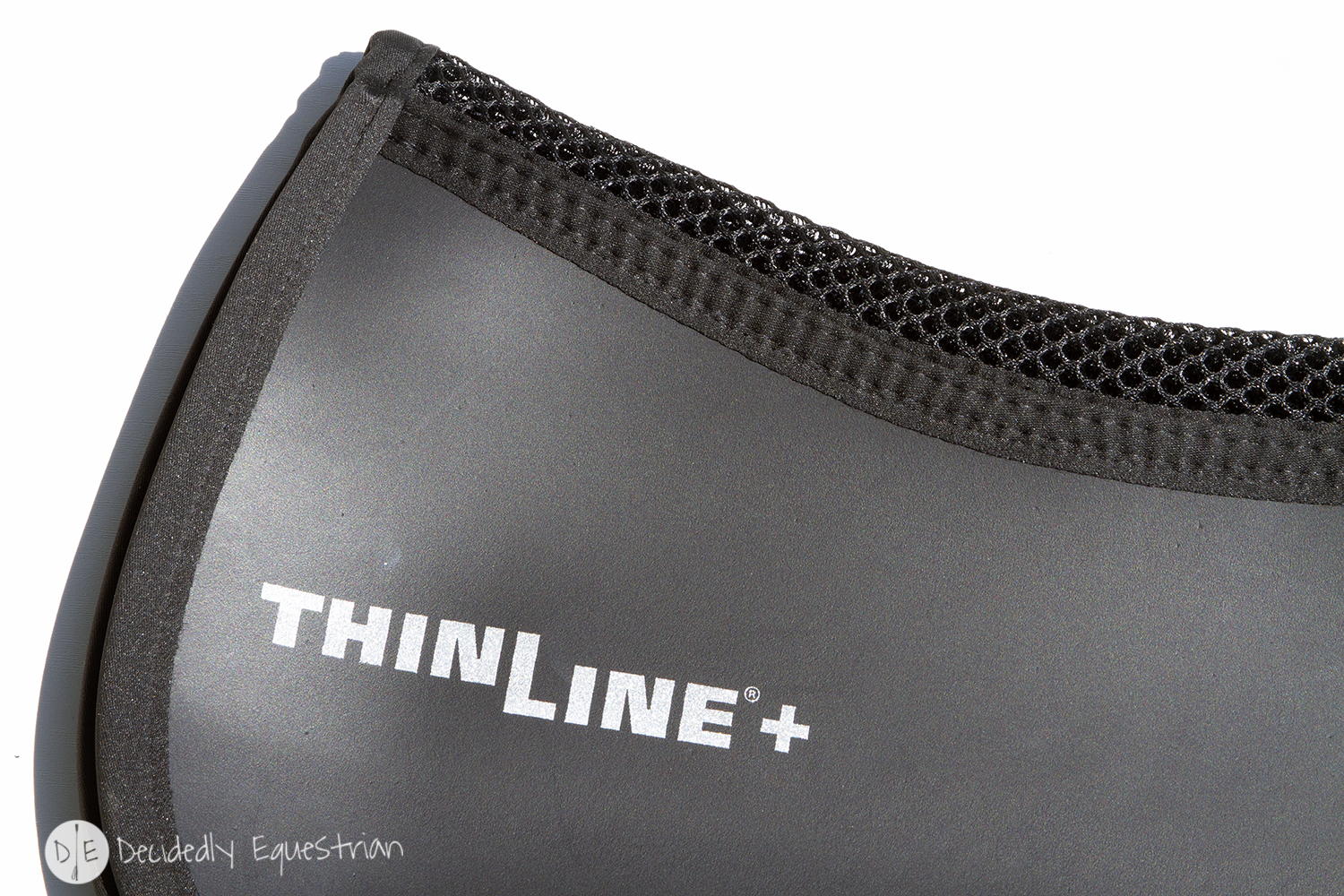 Having the binding on the edge of the pad gives both a cleaner look and adds some protection for the ThinLine material so it doesn’t get knicked or torn (as I’ve had some tearing on my boots and small knicks in the edging on my OG ThinLine).  So I appreciate that addition as well. 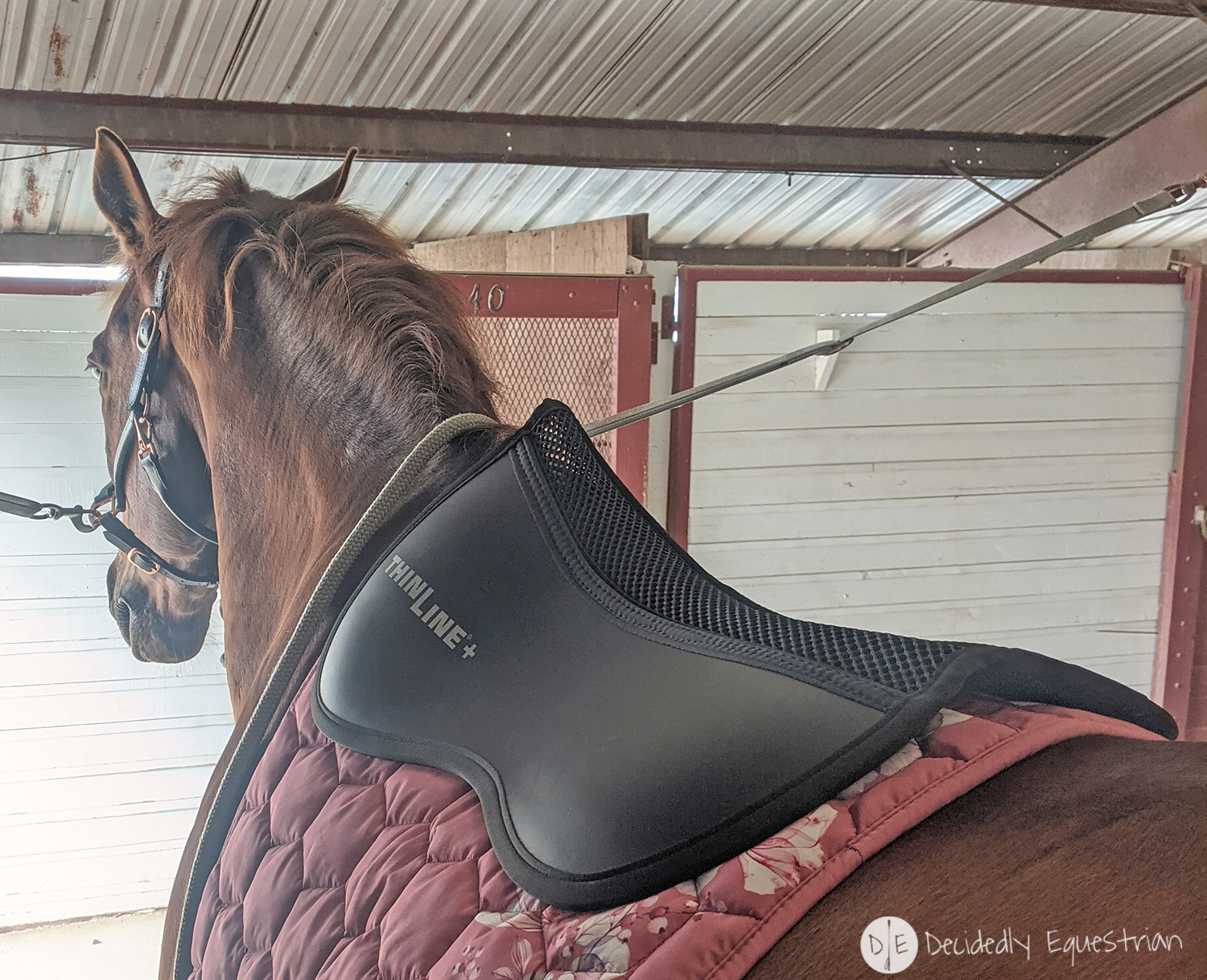 As with the other ThinLine products, it’s super easy to clean with just a wipe down with water or spray of the hose (if really necessary).  Even after over half a year of regular use, mine still looks brand new.  The value is also good.  My original ThinLine is many years old now and still in great shape.  With the addition of the new protection of the outside binding and release of pressure on the material pulling across the spine, I expect this pad will last me the lifetime of a horse…easily. It’s more expensive than the original, but with the upgrade to fit, the binding and breath-ability, it’s worth the extra cost in my opinion.  It is still half the cost of my fancy sheepskin pad that is now living in my closet gathering dust. 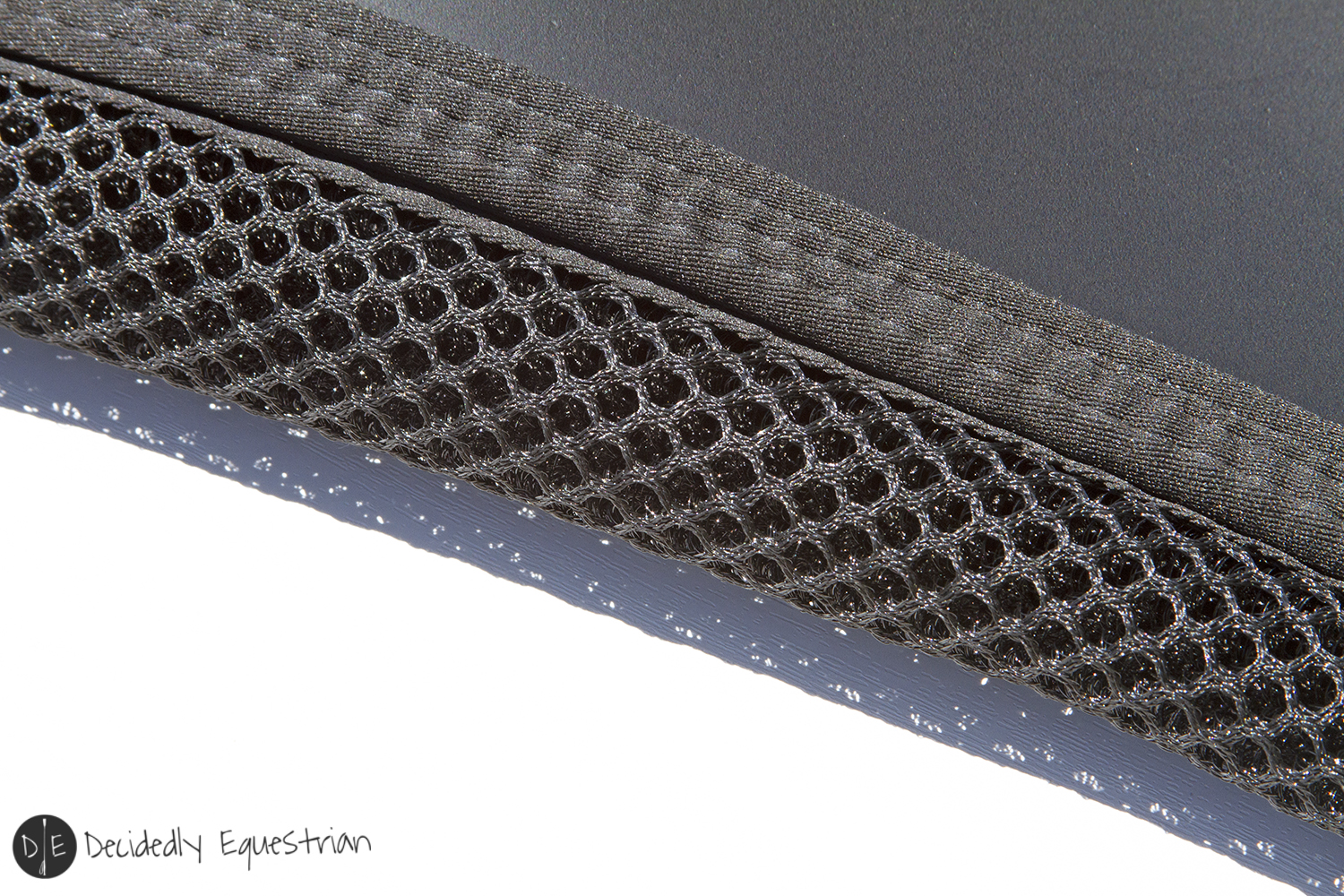 The ThinLine Perfect Fit Pad is literally a straight upgrade to the Original ThinLine, with all the things you love about it…but even better.  If you love your original ThinLine, go buy this one and you’ll love it even more.  I absolutely love mine and I’m happy that it’s finally on the market for everyone to share in the awesome! 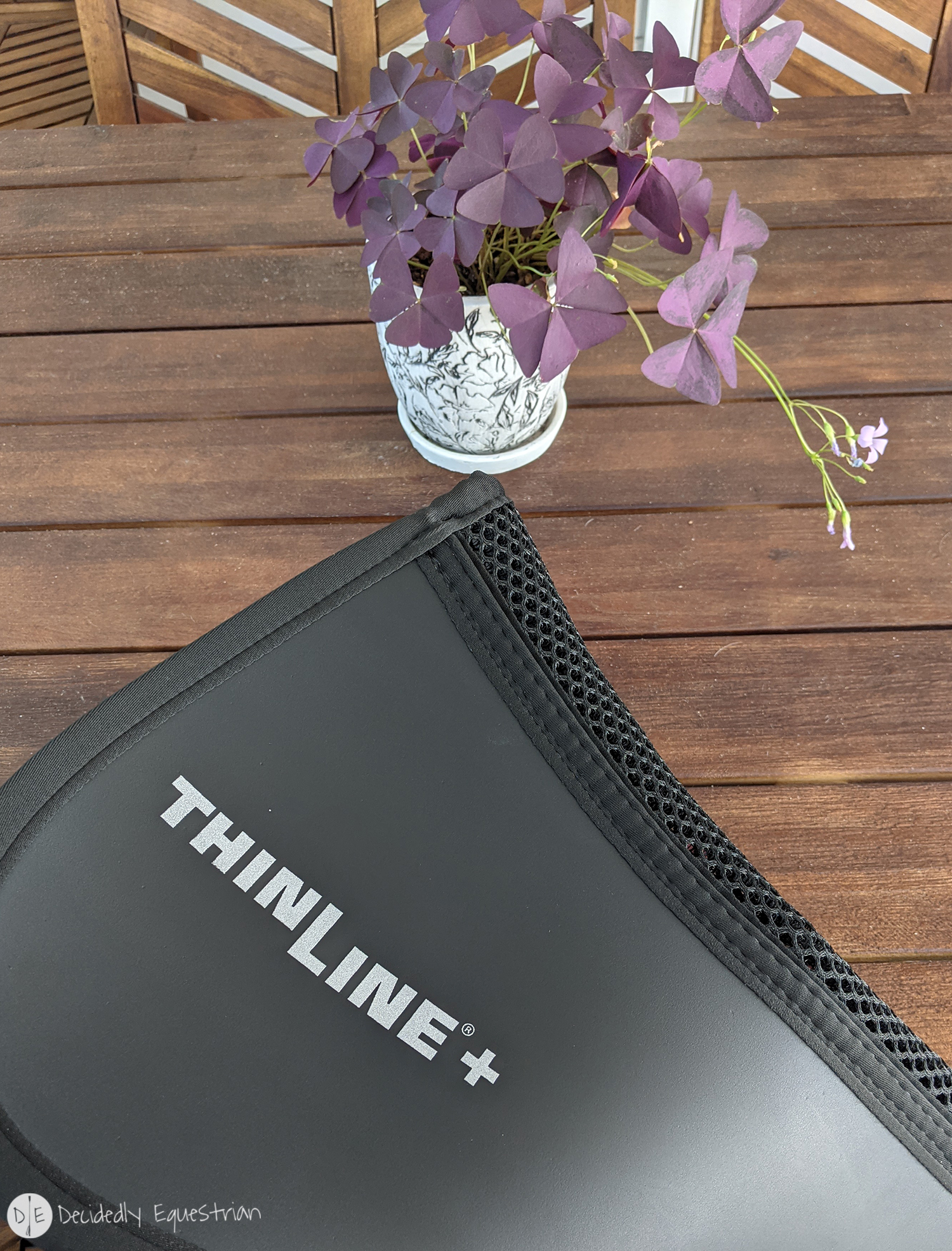