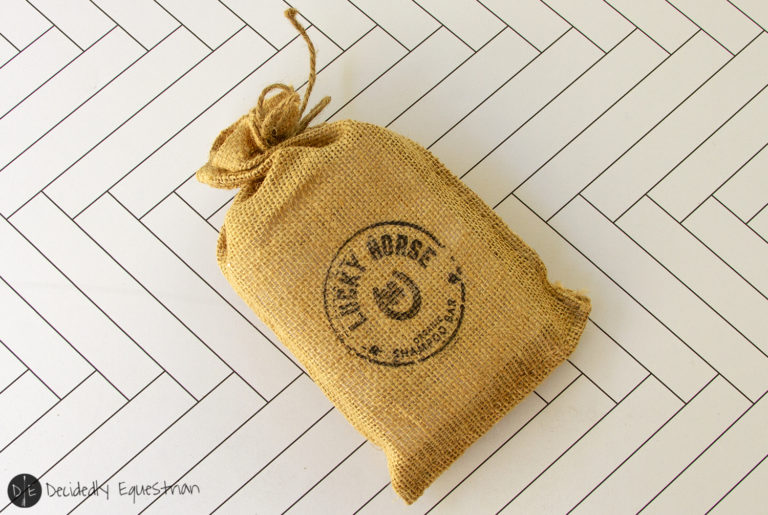 So I was super intrigued when a friend of a friend reached out to me about her new company Lucky Horse Soap and wanted to send me a bar to try out.  I’m all for cold process soap (hell I used to make it myself before I had my daughter), but I never considered using it on a horse before…  What an excellent idea!  It makes so much sense for Jax too who I don’t bathe often because he has that sensitive chestnut skin.  He typically rubs himself on whatever he can find after baths because he’s itchy.  Shampoos typically strip the dirt off him and strip all the oils too…and he has many dry patches and crusty bits on his skin when kept too clean…so I was ready to try it out!

Quick chemistry lesson for you so you understand the magic.  So if you don’t know what cold process soap is…this is not the soap you buy at the store.   Those are detergents.  If the ingredient list on your soap contains more than a handful of ingredients…it’s not actually soap.  Soap is Lye + Water + Fat = Soap!  Lye you say…won’t that eat your skin off…yup!  It does.  However when combined with water (which is even more dangerous than on its own – now you see why I don’t make it now that I have a toddler) and blended with fat and left for a period of time a magical chemical reaction happens where the molecules of the lye bond with the fat to make soap.  And when you do it right…there’s left over fat in the soap that has not bonded with lye which leaves softening oils behind mixed in with the soap.  Cold process soap will not dry out your skin …and therefore won’t dry out your horse’s coat and skin either.  PH balanced magic.

First off…man…the smell.  Straight off the bat when I opened the box I was inhaling deeply in a beautiful spa like experience on my front porch.  It does smell like lavender…so if that’s not your thing then there you go (maybe she’ll have other scents eventually or unscented).  There’s also the very real concern of drug testing since lavender can test, but I think probably in the amounts here…and washed off immediately the chance of a test is probably low.  But for me the smell was lovely…and show season is over for me so I’m not worried about it.  Hopefully she comes out with another scent option that won’t risk drug testing for USEF competitions and to give another option for people that don’t like lavender.   I think the little pouch that the soaps come in is super cute and I was excited to give it a go in the little scrubby bag included.  Clever that.  Using a bar of soap on a horse sounded tricky until this little bag comes into play.

How did it perform?  Well as I mentioned I try not to wash Jax often.  Usually only hose him off unless it’s before a show.  I decided to try this after a very sweaty ride on our own one day and…well Jax wanted to eat the soap first off.  He quite enjoyed the smell and was trying to reach around and get to it when I was scrubbing him, which made things tricky.  He also REALLY enjoyed the scrubby bag and the itchies it scratched for him.  Not too scrubby to irritate his sensitive skin…but scrubby enough to feel good.  Now real soap doesn’t lather much, and this one I had to work and work to show any kind of lather which is good!  It’s doing what it’s supposed to.

It was incredibly easy to use in the pouch.  Put the string around the wrist, hose the horse, wet the scrubby, scrubby the horse, drop the scrubby to hang around your wrist and rinse.  No filling up buckets, diluting shampoo and conditioner, no sponges, no brushes, no dropping said sponge and bucket full of diluted shampoo in the mud flailing around trying not to get stung by the yellow jackets.  No having to fill the bucket back up and clean out your sponge and start again.  This was the quickest and easiest bath I’ve ever given using anything other than water.  And Jax wasn’t itchy afterwards…but he was clean!

It rinsed clean very quickly with no left over suds.  Here’s where it gets funny…Jax was shiny and clean from afar.  His coat looked gleaming.  He smelled wonderful.  The skin was clean of dirt and dander…but he still felt dirty!? What?!?  What do I mean? Well I mean the soap didn’t strip the oils from his skin and coat (and maybe added some), so it felt like healthy, happy hair.  Not crispy clean stripped coat.  His coat looked lush and his skin felt normal, not stripped and tight.   I appreciate that.   He appreciated that.  As for the bar after, I rinsed it off and hung it up on a nail to dry and the next day when I was out at the barn it was dry and ready to store.  Easy!

Value is pretty good imo.  It’s been a few years since I priced out and made soap…but I used to charge $7 a bar for my friends which broke me about even on quality ingredient costs…and a lot of cold process soap companies charge much more a bar.  This pack includes 2 bars of soap and the scrubby bags…and ships free in the US for $30.  That’s a good deal.  These bars are also going to last FOREVER, especially in the scrubby bag and hanging them to dry completely.  I spend about $30 on a bottle of shampoo that I go through in maybe 5 or 6 baths…this will go longer than that.  Oh…and if you aren’t using it up…you can always just use the soap on yourself or to wash your hands at the barn.  I’m curious how many washed exactly I’m going to get out of this one bar…and I’ll try and remember to update that here once I’ve used it up…but I don’t need to order shampoo for a long while!  It is always exciting to try a new product that works so well and that is enjoyable to use too.