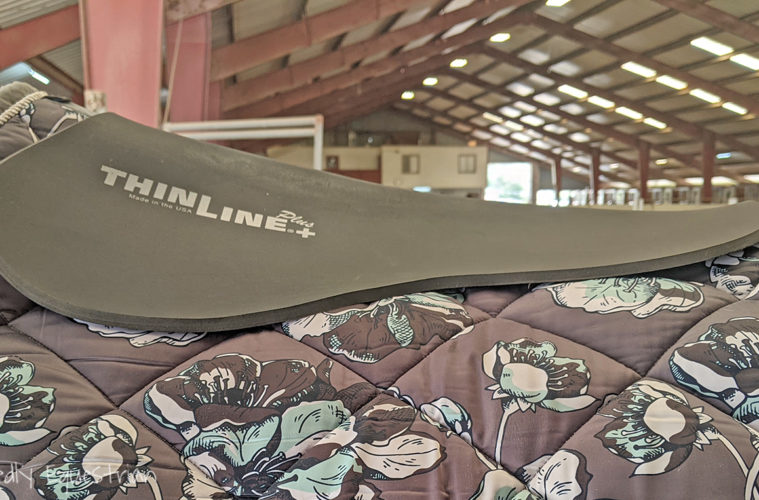 I bought the Thin Line Basic Half pad several years ago now (4 or so as of this writing is my best guess) for Mr. Spicey.  He was older when I started riding him and even with getting a saddle fit to him and a fancy Mattes sheepskin pad…I always felt like more protection was better.  The Thin Line material intrigued me and I picked one up knowing that the thinness of the pad wouldn’t interfere with the saddle fit and that it might help him.  I used it on him for a couple of years…and when he passed away I put it away in a closet.  I never really thought about it while using it…to review it.  I never noticed anything major one way or another with him wearing it…but I always used it…so I never tested not using it. 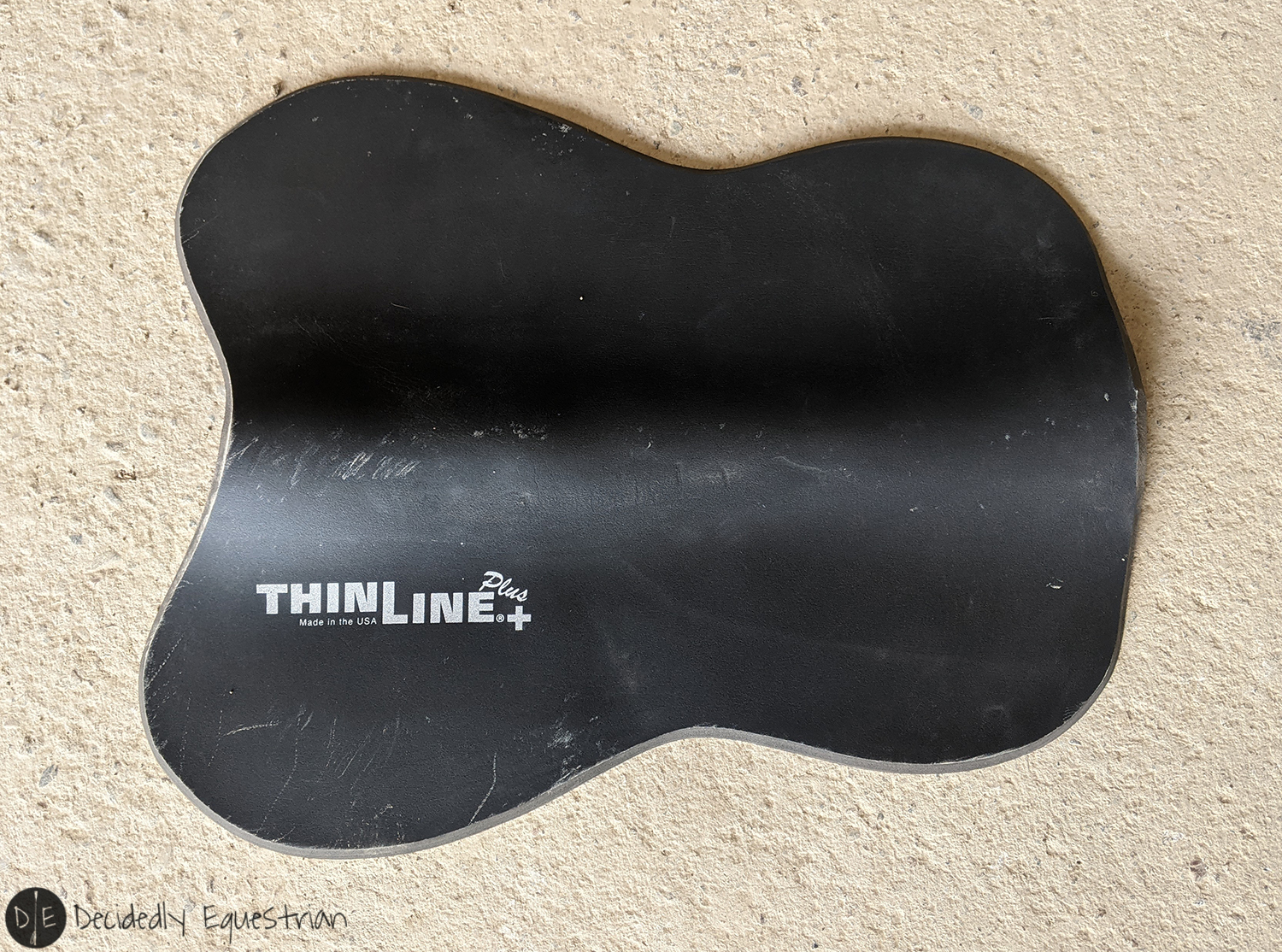 Fast forward to a few months ago.  I’ve been riding a huge beast of a horse you all know as Jax.  He’s 10 years old and when I started riding him, he’d been sitting in a paddock recovering from injury for a while.  I had the saddle fit to him and was using the same fluffy sheepskin pad under it (which is…slightly less fluffy these days than it was).  Things were fine for over a year. 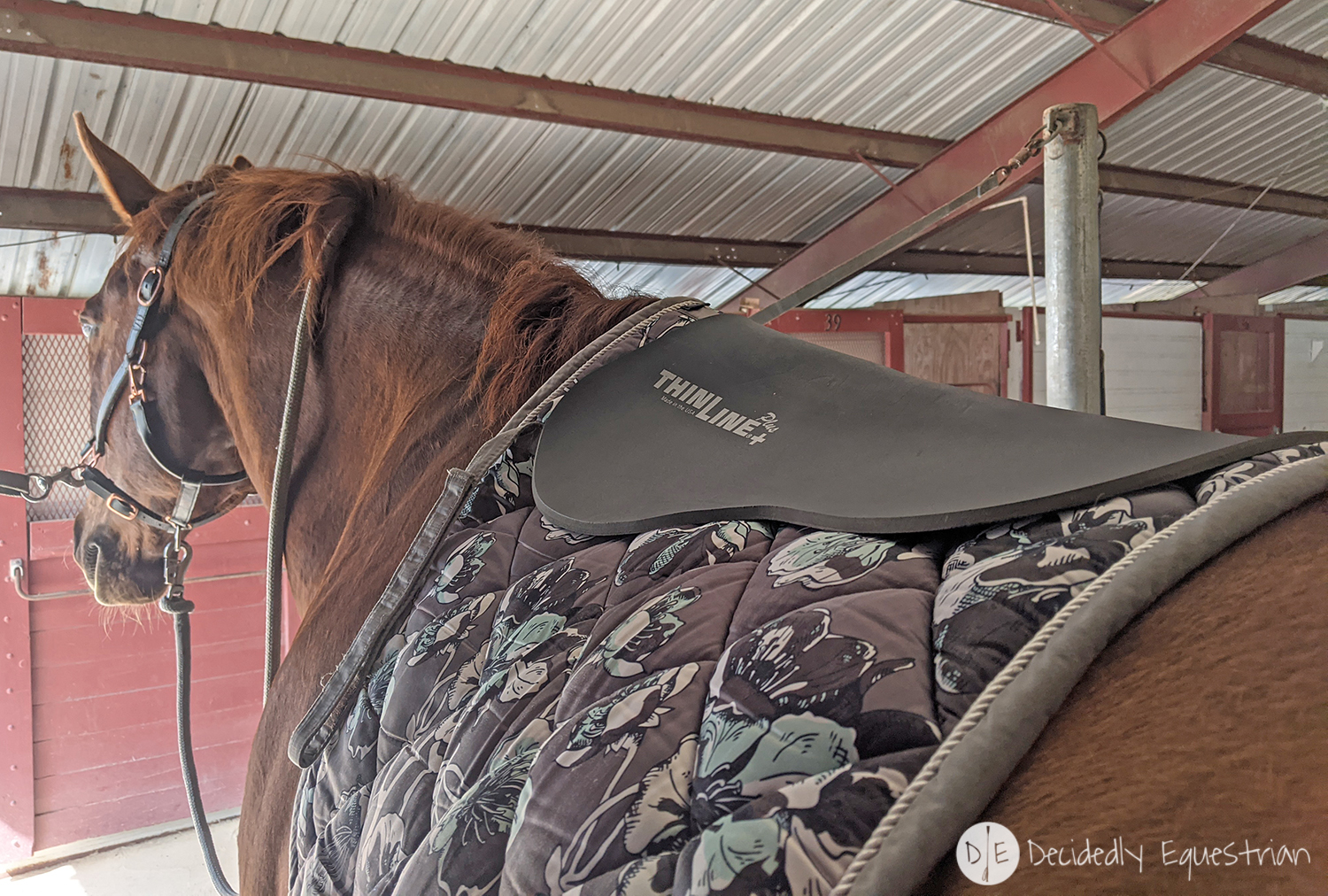 One day out of the blue, Jax started bucking under saddle (something he doesn’t do).  The chiropractor came out twice in a couple of weeks and he was badly out in his back and having muscle spasms (he had an escape one day…so we thought perhaps his tour around the property he did something…but who knows).  What to do?  I dug my old Thin Line out of the closet thinking that might be the thing to add to help him out until his back recovered.  So I brought it to the barn and analyzed my saddle fit a little more closely.  Despite having a lot of muscling built up in his back since the last saddle fit…the saddle looked to be fitting him fine…if not a hair high in the front (so minute in fact I didn’t really notice it until I got to looking REALLY closely).  I took out the sheepskin pad and the saddle fit completely perfectly…so I determined the saddle needed to be adjusted…or I needed to stop using the sheepskin pad and try just the Thin Line for a while. 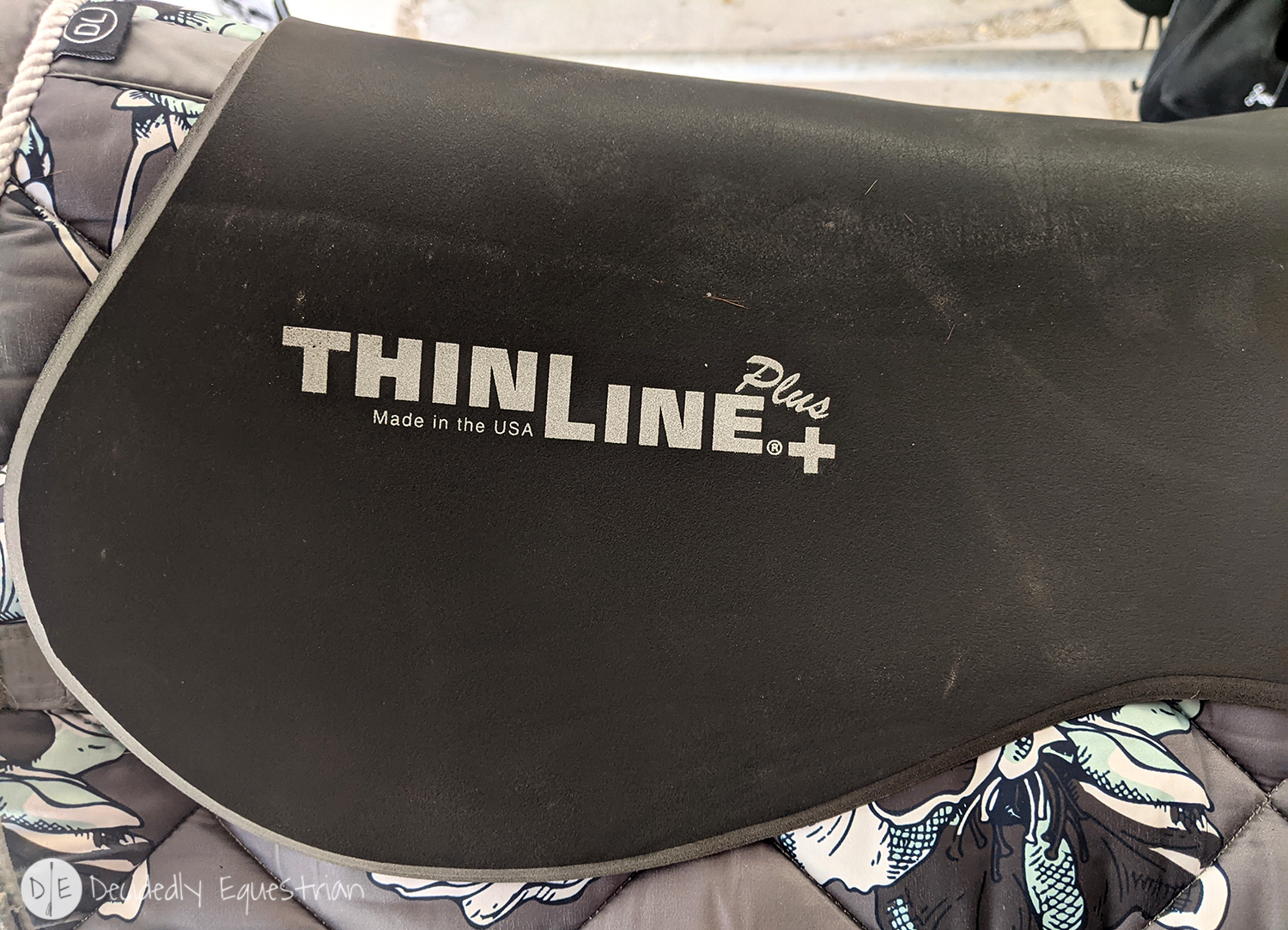 I put the Thin Line pad over my square pad and the saddle fit perfectly.  We went for a ride.  While a little defensive initially (I’m assuming out of memory of the pain from the last couple of weeks), he was back to himself again and I felt his back slowly relax.  A couple months later, I check his back every day and do some minor adjustments and massage…but he’s doing fantastic and there’s very little reaction when his back is tested.

I did a couple of things to his diet that may…or may not have done anything…but I think that the addition of this half pad into our ride has made all the difference in the world for him.  I’ve felt him really relaxing and using his back more correctly the longer we work in it and I appreciate the closer feel from not using the sheepskin. 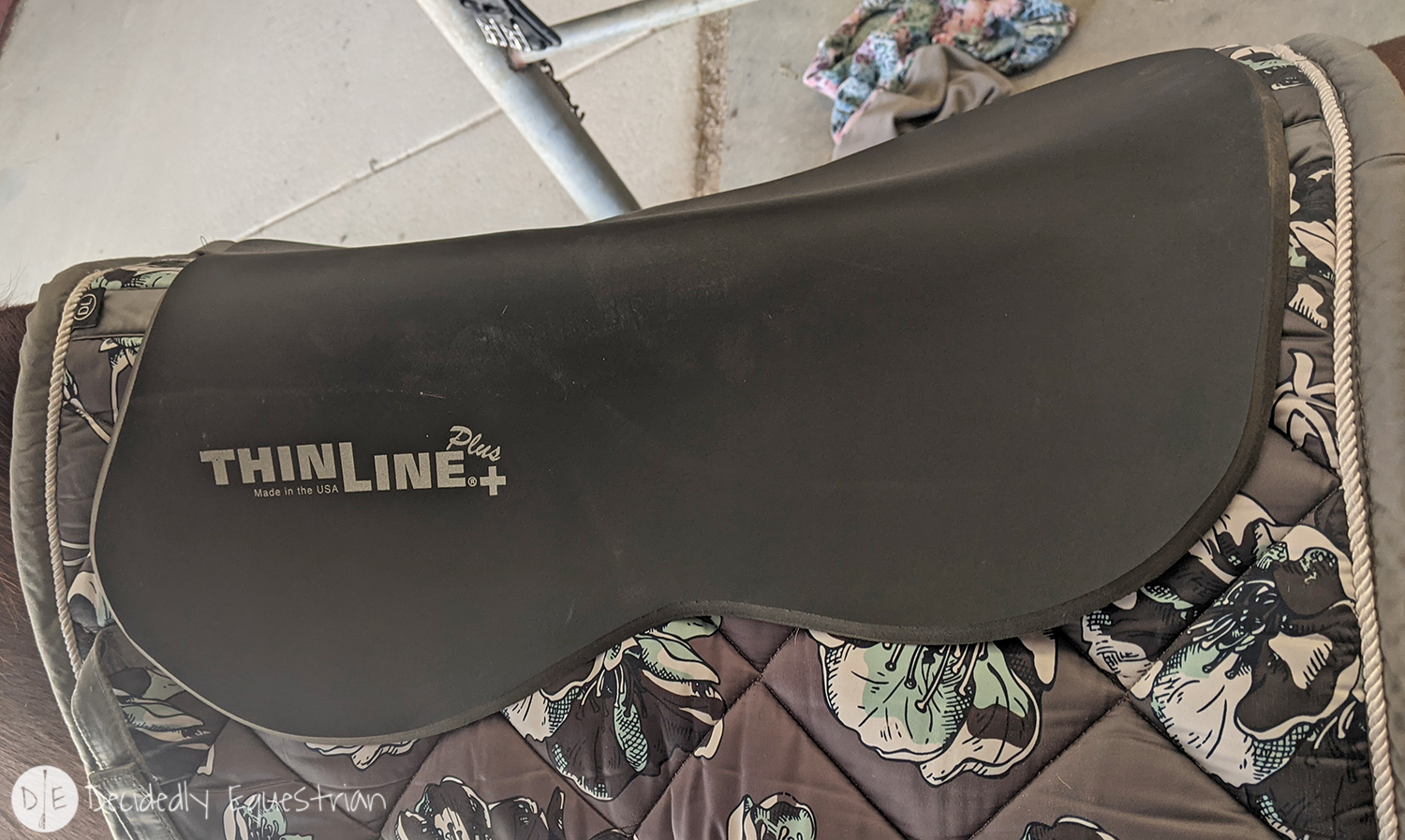 More impressive is the condition this pad is in.  I’ve had it for about 4 years… It was used daily for a couple of those years…and then put away in a closet…and it’s in perfect shape.  You’d never guess from looking that it’s that old.  My sheepskin on the other hand…you can see the years of wear on it.  For what I paid for it…it’s been a bargain and if and when the material starts to fail, I’ll buy another one.  It’s probably one of the better horse purchases I’ve ever made.  It’s easy to care for and isn’t noticeable under a saddle (wore it to a show recently without my sheepskin and it looked just as tidy as using the sheepskin).  Sure…I miss the pretty fluffy look around my saddle…but for the results I’m happy to give the sheepskin that place in my closet for a while.

On top all this…it makes a more comfortable ride for me as well. I’m not sure if it is from the shock absorption or from Jax using his back better in it…or both…or a mental thing.  I don’t know.  But at our last show a couple weeks ago I received a 7.5 for my Rider Position and a comment of “Nice Seat” AND a 7 for Effectiveness of Aids… I was beyond thrilled with that.  Back in January riding the same tests I got a 6.5 for my seat…and I regularly get between a 6-7 for my seat and my aids.  I’m going to go ahead and guess that that uptick had something to do with the equipment change and not that I suddenly started riding better after getting the same scores for years.  I’ll take whatever boost I can get.

I’ve been absolutely impressed with this pad since I pulled it back out of my closet and I’m more appreciative of it now than ever! 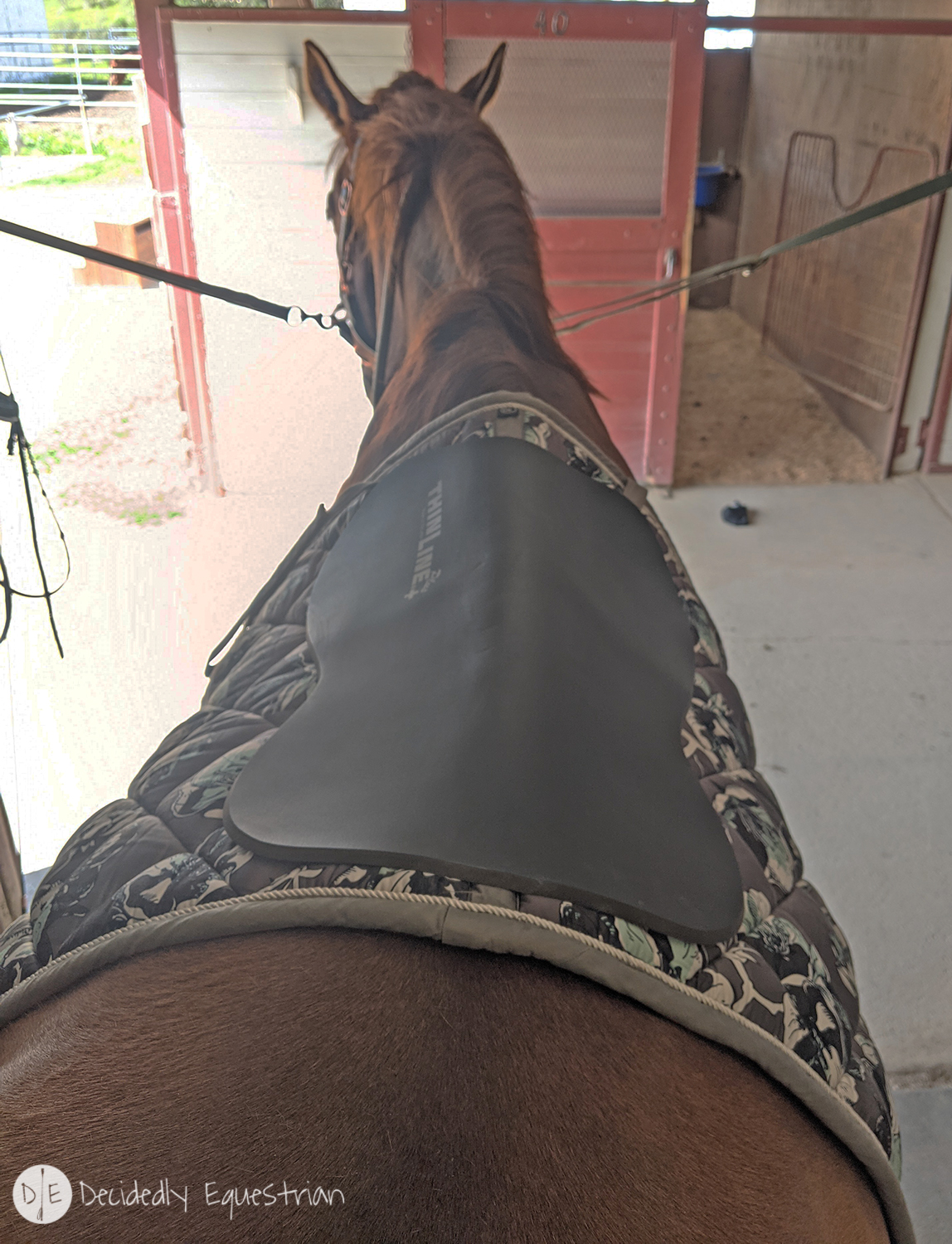