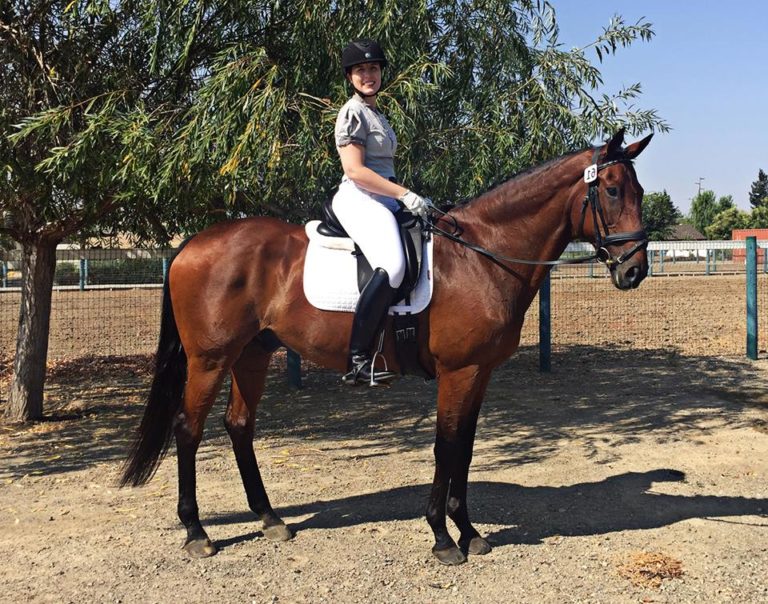 With a new series starting, I thought it would be only logical to start with myself!  If you would like to submit yourself to be featured, send me a message!

What is your name and where are you from?

Rachel Masen.  I’m from Arkansas originally, but I have lived in the SF Bay Area now for over a decade.

What do you do for a living?

I work at Golden Gate Fields as the Aftercare Liaison (aka I help people that need to retire their racehorses).  I also run a website/design business.  I haven’t been doing it lately, but I also shoot photography sessions for equestrians in my local community.   And of course I am the founder/editor here at Decidedly Equestrian.  I have been a press photographer at a number of events including the 2018 WEG which was an amazing experience and several years at RRP.

I also have written a young adult book that I plan to get published (and a few others to continue the series).  So in a few years I’ll have a big chunk of change (hopefully a JK Rowling sized chunk) to support my horse habit!

How old were you when you first sat on a horse/pony?  Took your first lesson?

No clue!  I was young.  My best friend since I was basically walking (Lori) had horses (well her family did).  I was over there non-stop.  I always loved horses and rode when I could (which was rarely).  I ended up becoming that weird kid on the school bus with Bloodhorse Magazine.  My horse experience up until 25 years old was random trail rides, riding friends horses in the pasture, and going to the horse races.  And reading horse training books.  And galloping everywhere instead of running and playing with my Breyers.

I took my first lesson when I was 25 years old (yup…really)!   I was gifted a couple of lessons by my mother in law/aunt for Christmas and it was on after that.  I was leasing in 6 months and learned as much as I could as fast as I could like my life depended on it.

How often do you get to ride now?

I’m currently riding 3 days a week.  Up until having my daughter Derby, I was riding 5 days a week, but I just don’t have that budget for extra childcare right now.

What discipline(s) do you currently ride and what others have you done in the past?  How did you land on your current discipline?

Currently (and for the last several years) dressage and i don’t see that changing now…ever.  I’ve long been a trail rider and still occasionally go on trail rides with friends (or alone with Jax).  I have not really competed in…but I have done a little reining and a little gymkhana/barrel racing as well as a little jumping, english/western pleasure and a little trail obstacles work.  I actually lie…I did do one gymkhana show many years ago and a couple English/western pleasure shows.  But I’ve done a lot more with dressage than anything else (USDF Bronze Medalist and successfully shown to 4th level).  Have done a few PSG tests but the highest I ever got was a 56%.

I also have done a lot of work with OTTBs over the years and have ridden quite a few as a volunteer.  It’s been a few years since I’ve done that now however.

How did I land on dressage?  Kinda happenstance.  I have long preferred English saddles due to a bad ankle so I always rode in one or an endurance saddle with English leathers.  The dressage happened after I started leasing a half Oldenburg/half Morgan (Champ) that was pretty much screaming to be a dressage horse and started having a dressage trainer out to our barn every couple of weeks after that.  I jumped all in after Champ got injured and I started leasing an already been there PSG dressage horse (Spice).

What are your favorite equestrian brands (horse products or rider products)?

Tell me about your first horse.

I’ve never owned a horse, but the first horse I leased was Titan.  When I first started taking lessons, I was obsessed with Titan (my aunt had leased him for several years) and my singular goal was to lease him.  I was in love with him until the day we had to tell him goodbye.  He took me to my first show (gymkhana).  He was a late geld that raced until he was 8 (but wasn’t very good).  He was a great lesson teacher for me and many others and did a little bit of everything in his life.  He was sweet and snuggly on the ground and had the manners to move into your house with you.  He was a little nervous and tense at times, but was an excellent trail horse and had a fabulous canter/gallop.  I’ve been spoiled on canters ever since.  I have a hard time enjoying a canter on a horse that isn’t at least part TB.  They just feel so awkward.  A few years later I met Spice (who happened to be from the same foal crop and same sire as Titan) and it was like meeting my old buddy again they were so similar.  Unfortunately, I wasn’t to have either in my life for very long…both will be in my heart forever.

Tell me about your current horse.

I currently am leasing a big beast of a horse named Jax.  He’s over 17.1 (probably a bit more).  He’s half Hanoverian and half TB (Seattle Slew mare).   He’s an AMAZING horse to ride, though not the most endearing personality on the ground.  I started with him last November (so less than a year and a half ago).  He would barely canter then and my trainer wasn’t sure that I’d end up liking him.  Now we are high pointing at 2nd level and schooling 3rd.  He’s very talented, athletic and clever and I’ve found his motivation button.  I’m lucky to have found him and to get to share him with his owner Clare.

Spice and I won the 2018 CDS RAAC 4th level class (pretty ribbon and cooler)…however we were the only pair in the class…so default win.  Lol.  I’m still proud of our achievement anyways.

Spice and I were also the 2018 Jockey Club TIP 4th Level Champions (pretty ribbon, jacket and some $$).  We were NOT the only pair in the running and honest to goodness won this.  I’m super proud of this achievement and so thankful that the Jockey Club offers this awesome (and free) awards program for OTTBs.

Jax and I recently won the high point at a local show (in our first outing at 2nd level) that got me a REALLY nice gift certificate to a local jeweler.  Funny enough…monetarily this prize has a higher value than either of the other things which is wild.

What is your proudest riding moment?

My proudest riding moment has to be the 66% Spice and I earned at 4th level.  Our second test that day was only a 60%.  But for that one test we were both ON.  He wasn’t a high scoring horse (at over 20 years old), but he tried hard and when we clicked it was excellent.  Nothing was easy with Spice (his anxiety was pretty high most of the time)…so when things went cleanly and perfectly it was a big deal.

The second proudest moment was finishing our final clinic together with Heidi Gaian a few days before Spice passed away.  She had given her seal of approval for showing Prix St. Georges (finally…even though we’d already done it unsuccessfully to that point) and thought we would earn our 60% in the show the following week.  She is incredibly picky, so to have her say that meant we were really ready.  It wasn’t to happen unfortunately, but I remember that ride (and the rides in the days that followed) so well.  I daydream about feeling that again.

What is the worst injury you’ve had riding?

Titan and I both fell while cantering in an arena.  I lept off, but my foot got caught in the stirrup and got wrenched pretty badly.  My foot is permanently damaged now (due to the hospital blowing me off) and I can never run again.   Nothing else has caused permanent damage (as far as I know).

Tell me about a favorite riding memory.

There are so many and those proudest moments above are two…but something completely amazing and memorable were my rides on vacation in Europe a couple years back.  Riding in Ireland “cantering” through the woods (full gallop more like) and leaping ditches with just a guide to show me around.  And riding that big old black horse of unknown parentage in London through Hyde Park.  There is nothing quite like having a long canter down Rotten Row and having tourists run away from the big scary horses or running up to take photos of the big scary horses.  Thankful for the hookup from friends and for being able to have a horse experience that wasn’t just piddling around at a walk/jog with a bunch of tourists.  I will never forget them.

What is your funniest/most embarrassing riding memory?

Most embarrassing?  Probably the time I got bucked off a mounting block and ended up under the horse I was mounting (and got a hematoma on my leg).  With a bunch of little kids around me during a summer camp or something at my old barn.  Did the horse do anything at all…nope…even after I landed under him with the mounting block on me.   He just kinda stepped sideways and looked at me like “What the hell was that?”  I happened to just step on the mounting block wrong and flipped it over on top of my leg (it was a big heavy wooden one).

What are your riding goals for the year?

To show (and win) at CDS RAAC and CDS Champs/USDF Region Champs at 2nd level.  To put together and show a freestyle.  To teach Jax his changes for moving up to 3rd level.

What are your riding goals long term?

To ride for Team USA.  To actually own my own horses at some point instead of riding everyone elses.

If you could clinic with anyone living in the world right now, who would that be?

One person?  That’s a cruel question Rachel.  Why did you come up with that!  Lol.  Debbie McDonald…because the best the US has rides with her…and that says something.

If I could pick more than one I’d add Laura Graves or Carl Hester to that.