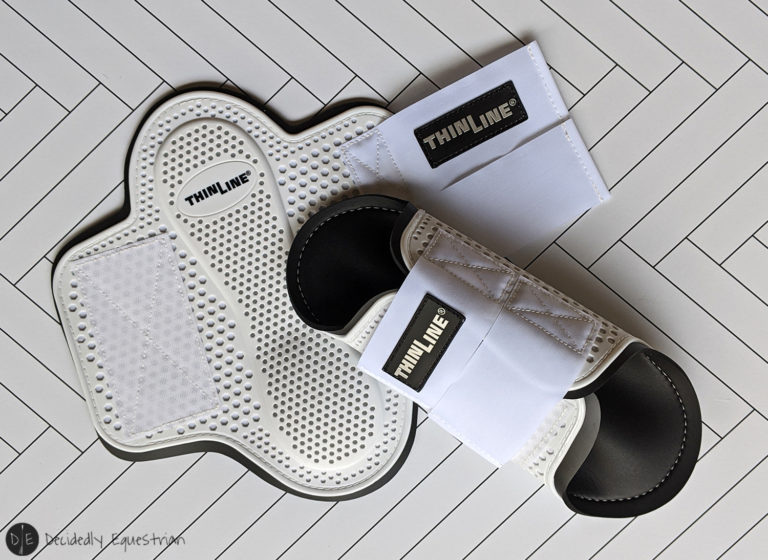 As a dressage gal, it’s pretty normal to have my horse wear boots every ride.  In fact, my current lease requires it.  Jax has several boot options to choose from including some VERY expensive Veredus brushing boots and some fairly expensive Equestrian Stockholm brushing boots…but my new go-to ones are the ThinLine Flexible Filly Closed Front Splint Boots.  A big thanks to ThinLine Global for sending these boots for us to try and review.  They exceeded expectations!

Note on review:  For the sake of this review, I have used these boots three days a week for just short of three months.  I have only washed them about once a week.  If I change my mind on anything after using them longer, I will change the review, but so far so good!

These boots looked quite stiff at first when I saw them in photos.  I have never really used a harder material boot, and I wondered how they would really work and fit.  I also wondered if they might not get really hot.   They are a plastic-y outer material that is bonded to a thin material underneath (called “Pro Mesh Engineered Material”) and lined with the ThinLine foam.  But I was more than willing to give them a try.  I picked the white ones…because of course I did!  They are flashy and pretty!  Sure black would have been more practical for schooling…but meh. 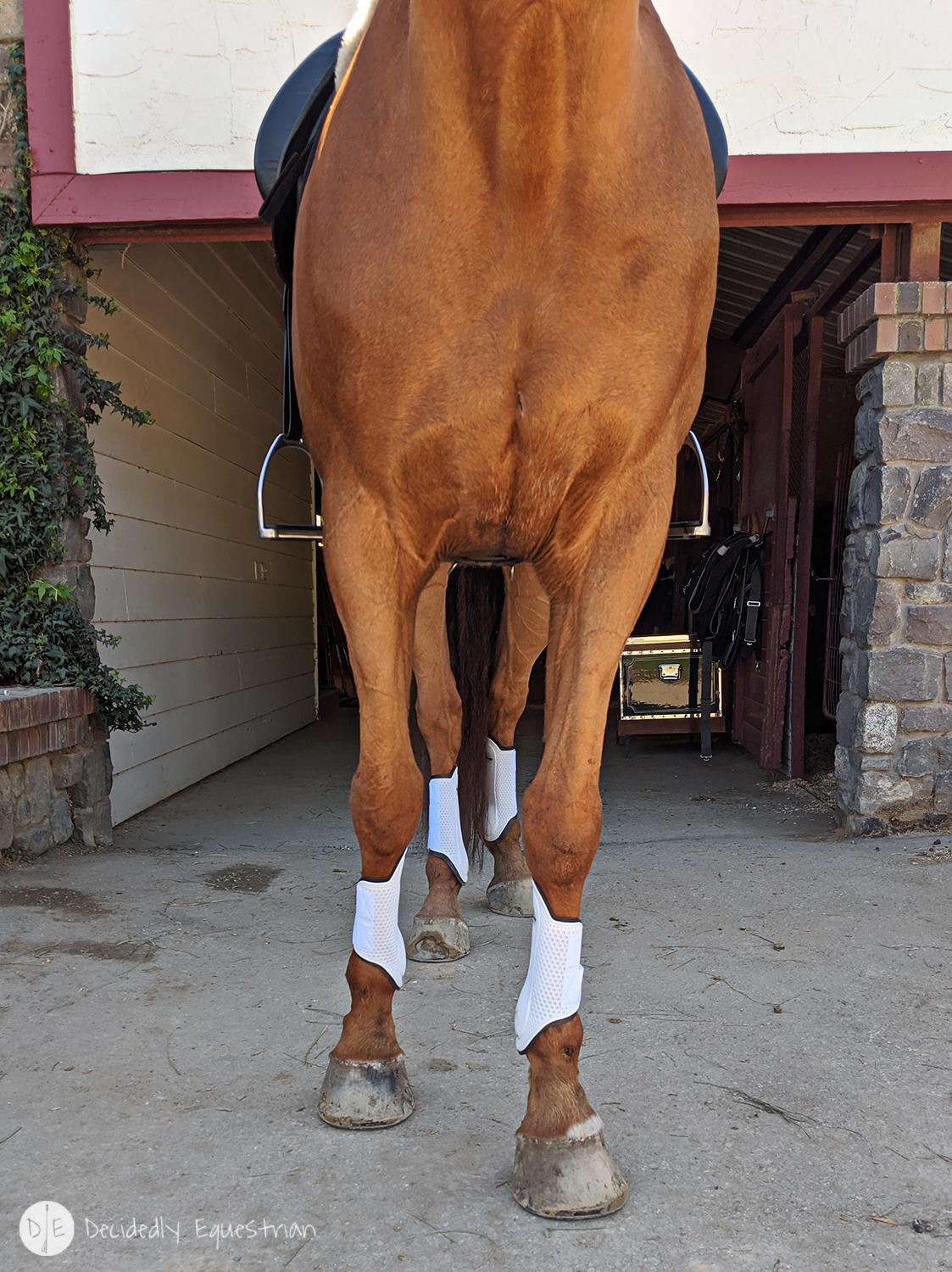 So I was initially struck by how lightweight these are.  And also, how bendy!  Not stiff at all!  They mold to Jax’s legs like they were custom made for him (he’s got mediums in the front and larges in the back).

In use, they are impressive.  They do not slip and they do not leave rubs (and there’s barely any sweat marks under them most days).  Legs didn’t seem to get any hotter than in my regular brushing boots…and were actually cooler on really hot days.  Unlike my other boots, I also don’t find sand inside them after a ride (which is great, because that means sand isn’t grinding itself into Jax’s cannons causing skin issues).  The strike plates have done a good job absorbing scrapes and impact and I actually think that these boots probably offer quite a bit more actual protection than any boot I have used before…especially with that ThinLine material added in there. 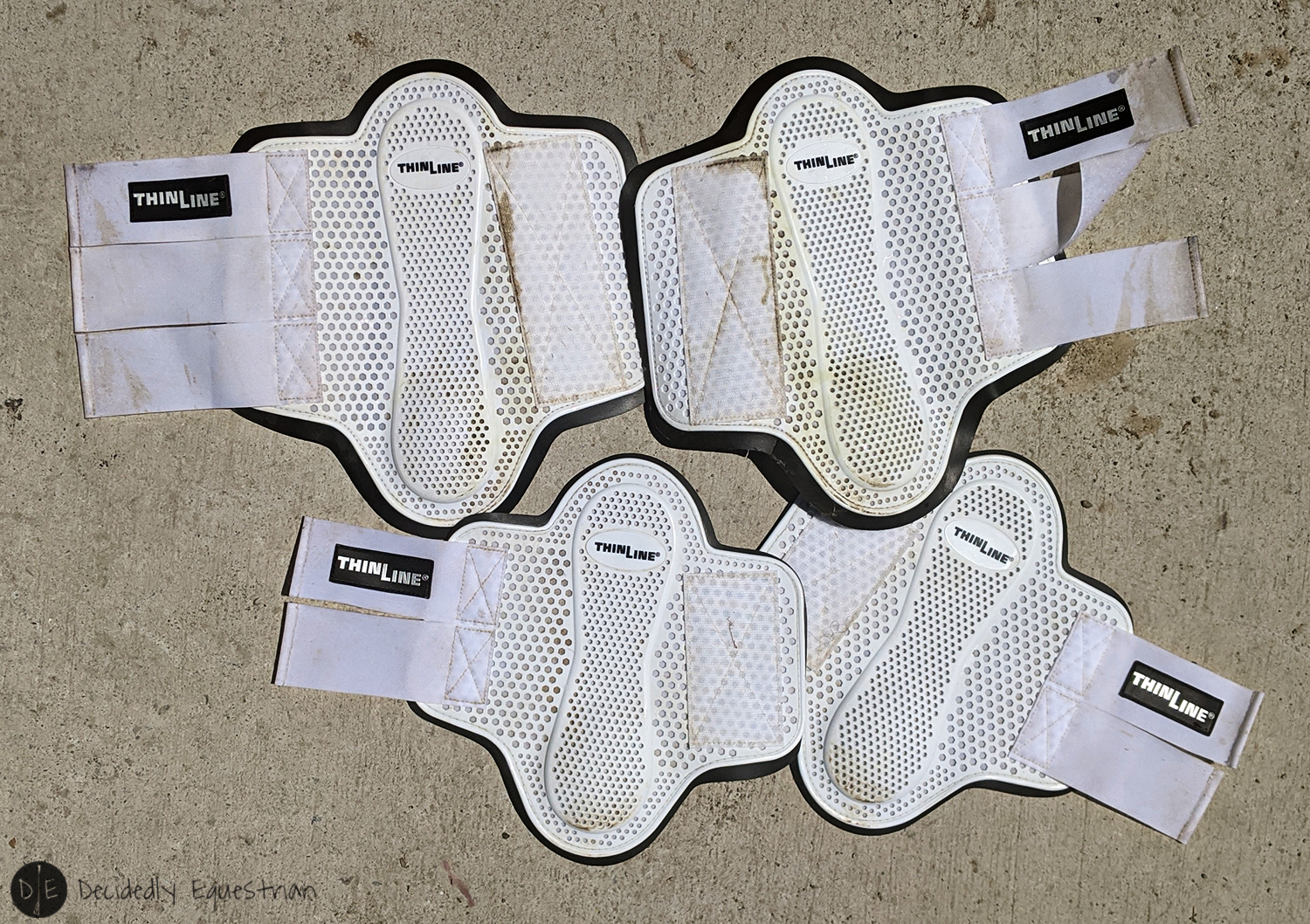 They are super easy to clean (though poop does stain them…especially the velcro strips) and it is harder to get the stains out of the fabric inside the honeycomb shapes.  Hose off and use a stiff brush.  I have not used any cleaning supplies on them at all other than water and a brush on the white bits to get the dirt/poop off as best as possible.  The velcro is solid and sticks well.  The photos above are after a quick hose off after 2.5 months of using them.  As you can see, some staining on the hind boots from poop, but otherwise pretty good for white boots!

The only issue I have had with them is a small tear in the ThinLine material on one of the boots.  It’s an area of high bend, so I am sure that’s why it tore.  It also tore pretty quickly (during the first month), and hasn’t progressed further than the stitching (and I’m hoping the stitching keeps it from tearing more).  So far so good.  I’m not really worried about it (but if it does bother you, they do offer a 1 year replacement warranty).  That’s the only knock I can find on this whole boot and it’s super minor! 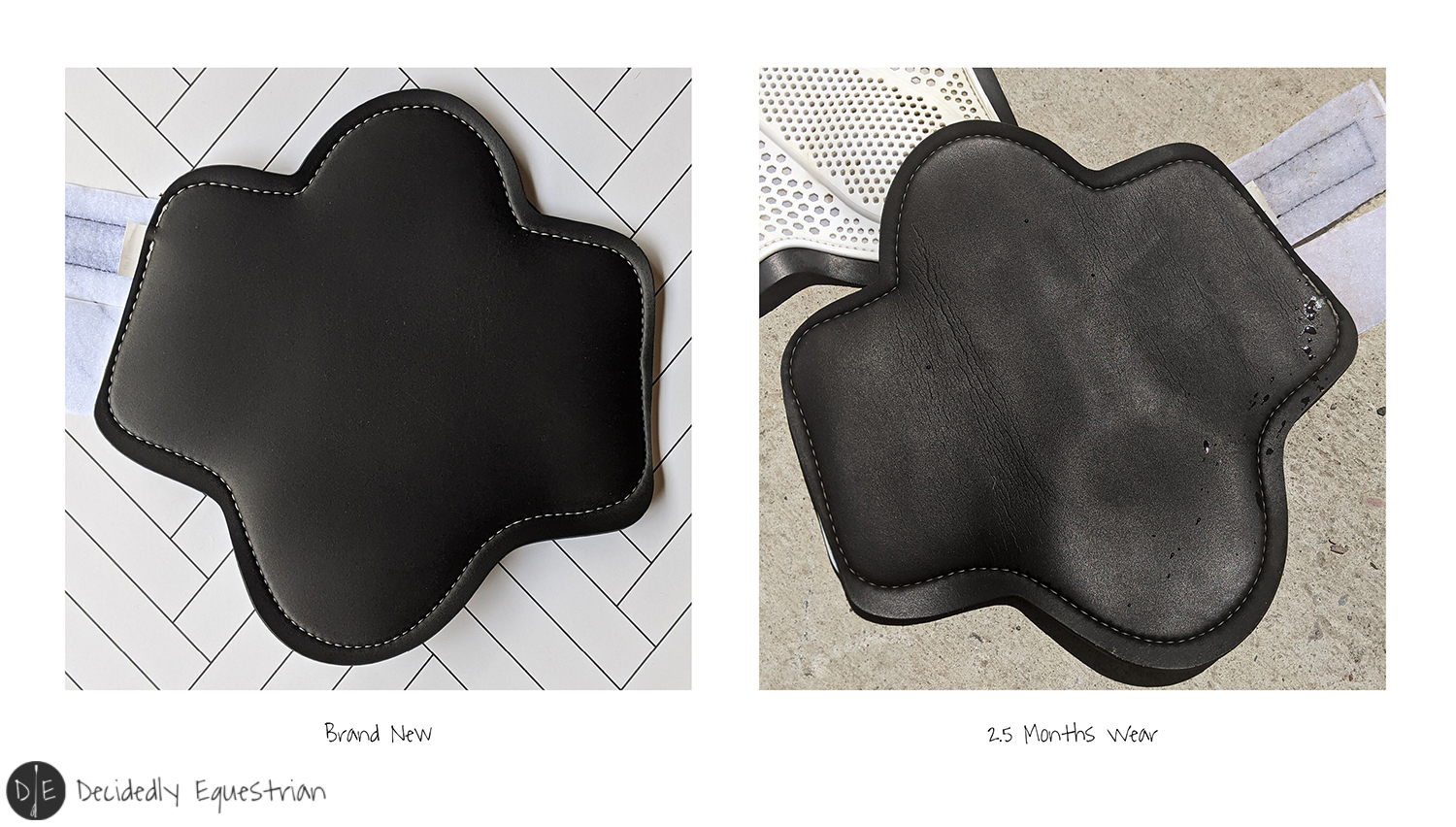 I really like these boots and for the price I actually like them much better than my “pretty” other boots.  They are for sure my new go to schooling boot!  I haven’t reached for the others once since (except to take to a show so Jax looked like a spoiled matchy-matchy princess).   I think that the price is right on them, they are an excellent product and they make me want to try out more ThinLine products!  Buy your own ThinLine Flexible Filly Closed Front Splint Boots here!