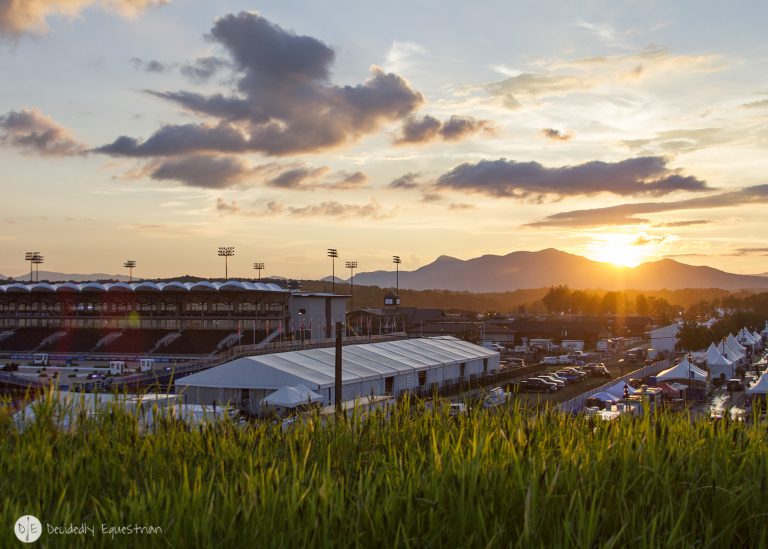 So I’m back home from World Equestrian Games Tryon 2018 and it’s time to look back.  This event had gorgeous rides, beautiful horses, incredible arenas, an exceptional cross-country course and more shopping than most could handle.  Those were the good things.  The event also featured endless construction, plenty of rain and mud, and lots of drama (for vendors, for the endurance folks, for the dressage folks).

This WEG is going to go down in history for its drama.  From the canceled endurance (and ensuing fisticuffs), to the canceling of the Dressage freestyle, to the euthanasia of 2 horses, Hurricane Florence, and the fact that the facility was no where close to being done for this event…drama abounded.  And that’s too bad.  While I’ll remember the beautiful rides I saw in dressage and the beautiful cross-country course…I’m more likely to remember forever all the things that were a little less than perfect.  I’m afraid the world will remember those things too.  I do hope Tryon gets another shot at this in the future, as I think once the facility is complete…there won’t be much in the world to beat it.

Individual Dressage was full of no surprises.  At least by the judging.  I could have guessed the top three going in…and I would have been right.  I don’t agree with the top three personally, and believe solidly that a rider outside the top 3 should have been on that podium, but I’m not an FEI judge…so no one cares what I think.  Charlotte got bronze on her new world-class mount Mt. St. John Freestyle.  Laura and Diddy rocked our socks off (despite the fact she was sick) for silver.  And of course Isabell Werth and Bella Rose won gold.

With Freestyle canceled and Eventing jumping moved to Monday, I didn’t get to cover as many events as I had initially planned since I was flying out Monday.  Eventing ended on Monday with Team Great Britain the victors and with the individual winner Ros Canter and Allstar B.  Padraig McCarthy and Mr Chunky pulled out a clear ride to win individual silver and help win the team silver for Ireland!  Ingrid Klimke and SAP Hale Bob OLD dropped a rail and dropped down the medals into bronze while team France earned the bronze medal.

I missed much of the reining competition since it was a pretty long slog over from dressage, but team USA won their FIFTH consecutive gold medal in this event!  Belgium was in silver and Germany in bronze.  Individually, Bernard Fonck and What a Wave won Gold for Belgium, Daniel Huss and Ms Dreamy won silver for the US, and Cade McCutcheon and Custom Made Gun finished in bronze for the US.

I loved getting to watch the para dressage and vaulting warm ups at the end of the week once those horses started arriving on site!  So much to see!  It was an exhausting week and I’m glad to be home, and this WEG was one that will etch itself in the minds of spectators, press, vendors and competitors alike for many years to come.  Here’s hoping week 2 goes more smoothly!