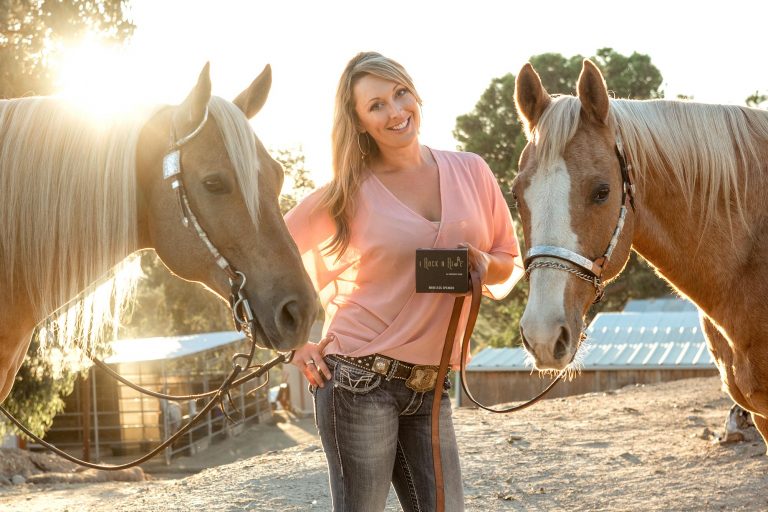 i Rock N Ride has a Kickstarter campaign up now!  Please check it out and pledge your support if you’re interested in this fabulous product. 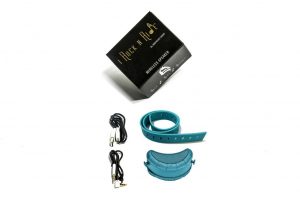 At Western States Horse Expo, I walked the vendor buildings looking for new products.  Most booths were busy, filled to the brim with products, promotional supplies and people.  I wasn’t interested and walked by most of them without pausing.

The one that caught my interest?  It was unassuming and as close to empty as a booth could be.  Two small tables with a handful of promotional materials and a small sign on the wall that said i Rock N Ride.  No people.  Curious, I stopped and grabbed a few promo materials.  I wrote a note on my business card and left it at the table, thinking I would just call later in the week.  A few hours later, I found myself back at that table and was pleased to meet CEO and product inventor Leah Lane.  I left the booth knowing that Hoofbeatz Audio was a company to watch and one I needed to feature.

i Rock N Ride is the first ever i OS-integrated mini speaker system for horseback riding on the market.  It can easily attach to both English and Western saddles.  It connects via Bluetooth to your phone so you can stream music while you ride, take calls, dictate texts, use Siri (or Android) voice prompts, and do quite a few other things for your phone with this device.  No more dropped phones.  No earbuds blocking you from hearing other riders or incoming trouble (though there is a port for those as well).  It has been designed to be dust and moisture resistant and can take its share of bumps.  The i Rock N Ride currently comes in two colors (brown and aqua), but black and coral are on there way if the Kickstarter campaign reaches its goal.

Tell me a little bit about Hoofbeatz Audio and its beginning.

After college I started my sales career in the horse products industry. I’ve worked for the world’s largest manufacturers. I traveled intensely for 15 years, selling products and pharmaceuticals, meeting many people and seeing almost all of the US. Traveling so much, I had pretty much abandoned my family and friends. Other people were now riding my horses for me.

Then in 2010 everything changed. My beloved dad, whom I was very close to, died unexpectedly. Trying to keep my mom occupied and help her through the change of now living alone, it was like a bad dream when my own husband and love of my life, was diagnosed with terminal cancer. The next six months we spent in hospitals and finally hospice, where his battle ended.

Alone for the first time in my life, my already high Italian anxiety went through the roof. I stopped riding. I worked nonstop. One evening in Los Angeles, a good friend knew I wasn’t okay and she took me on a trail ride. We had a great night ride with big desktop computer speakers wired to the front of our saddles. I had a few songs on my Blackberry and that ride was the best therapy I could ever ask for. Bluetooth was just becoming popular and the first iPhone’s were coming out.

Because of that night I sketched out some ideas. Two very tech savvy friends gave me the confidence to try prototyping and got me headed in the right direction. I was finally excited about life again because of horses and technology. I wanted the ability to ride and have a safe means of communication and features from a smartphone. Music & connectivity helped my anxiety especially some days on young horses and seemed to help them too!  And I could never hear my trainer when I was being coached, and hated having a headset in my ears.

Manufacturing has been interesting. There was a lot of designing, changes, corrections, failures, errors and finally successes.  I am trying to keep up with changes in tech, and the always evolving horse industry. I resigned from all the companies I’ve worked for officially in 2015 to focus on Hoofbeatz.  If my life hadn’t changed in 2010 I wouldn’t have had the idea and perseverance to make i Rock N Ride a reality.

What makes Hoofbeatz Audio‘s products different than other products on the market?

There is no other speaker, hands-free or Bluetooth that keeps your hands, eyes & ears focused on riding, while attaching securely to any saddle. It took over 3 years and 25 prototypes and designs to make something usable for all equestrians whether it is music/phone, or just the ability to hear a training podcast or set timers/reminders or send a simple text to let someone know your are running late and still riding. 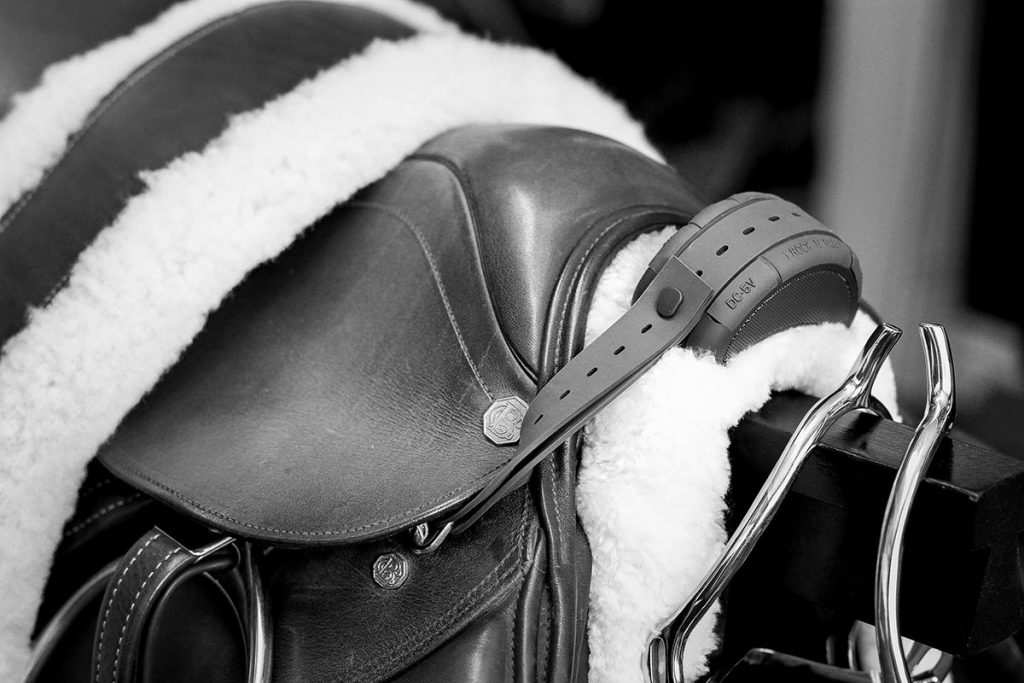 Do you have plans for new products or product updates in the future?

We are working on solar charging and two way communication for the i Rock N Ride and apps for endurance and cross country riders that will hopefully have an official timeline late summer 2016. There are so many ideas running in my head, but I am a perfectionist and my ideas need to be tested and perform perfectly.

In a nutshell this was the most difficult thing I’ve ever done. I first thought about it in 2010. I woke up every single day for three years trying to figure out how to do it as an individual and my first thought was to find an existing large electronics company to manufacture it for me. They all just wanted to take my idea. In 2013 I started with sketches and clay and found engineers and designers off the internet locally to make my idea come to life virtually. Then the testing started for shapes and internal components. It took over 25 designs & three years to make something all riders would be able to use. I drove everyone nuts as no one was a rider but me. Then I worked with a bunch of riders to test, feedback and re-design.  The design trial and errors were one thing, but so disheartening was the amount of people who couldn’t get simple work done. But I am so glad for the relationships I’ve built now with the people who can, and those who have a honest want to help someone with their ideas. 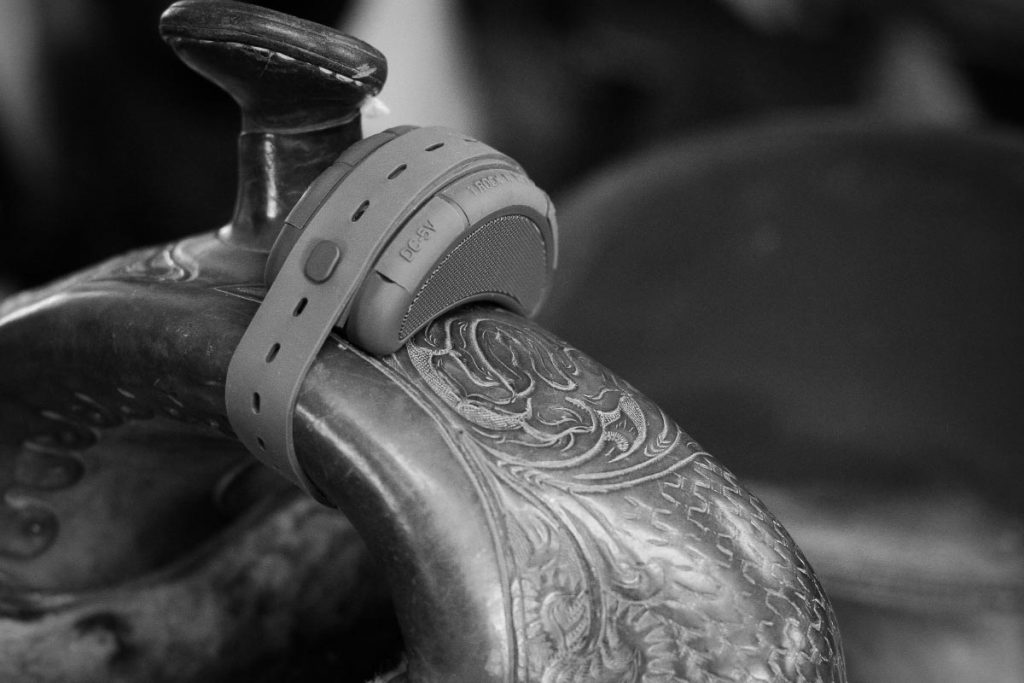 How did you end up starting an equestrian product company?

My life has always revolved around horses: showing and riding a lot of different disciplines, living in a very horse oriented community and with a horse friendly family. I worked at a local tack store and was a vet tech thru college and have my degree in agriculture from Cal Poly, SLO.  I’ve traveled and ridden abroad.  When I realized I couldn’t pay my bills in California as a Vet tech, I was hired by 5 of the world’s largest equine products & equine pharma manufacturers to represent their products all over the USA.

What is your equine story?

I was born and raised on the Central Coast of California.  I brought home every animal I could get my hands on to my parents farm. They too were always involved with horses, so I was riding very early in life. When I was six, I got my very own $500 pony.  When I was 12 in order to afford lessons and ride competitively, I was working for a local dressage trainer. As a teenager I was very active in 4-H and FFA, raising livestock. This kept me earning money for feed, vet bills and horse shows. At 16 when I could drive, I started working for a local tack shop. Here I fell in love with the endless amounts of supplies for horses and my paycheck went straight back to the store.

I interned during college for an embryo transfer facility and spent year abroad working and riding. I later showed all around paint/palomino and dabbled in cutting/roping. I love packing/camping with horses/beach rides. I started reining about 5 years ago. I have raised and bred many babies.

I currently live in Southern California, and have two dogs and two horses. I still love horse shows and love riding on the beach in San Diego. I travel less and invent more.

Which horses have been the most important in your life?

I don’t have kids but if I did I couldn’t put a finger on which one was most important to me.  All of them each have taught me so many things. The best are the youngest just coming out of their mama’s and the most solid to give confidence.

I have two palomino’s now. One mare I’ve had for 22 years. She and I have won a lot and lost a lot. She’s had a bunch of foals and is a difficult mare. I bought her as a 2 year old and she made me patient and gave me the will to not take no for an answer.

No day is never the same. June is the big launch of aqua and brown on the website, as well as the new color/print pre-orders and packages on Kickstarter so I’m booked early to super late and traveling a ton. I have not much sleep lately and I’m awake answering direct emails until usually midnight and up at 4 to get on my never ending to do list. I’m not going to lie it is a little nuts now, but I’ve assembled an amazing team so far. I just have to do a lot of stuff as I’m pretty particular.  Bringing this product to fruition was a ton of learning about every aspect and designing each piece of it, using my own resources and finding professionals to guide me. 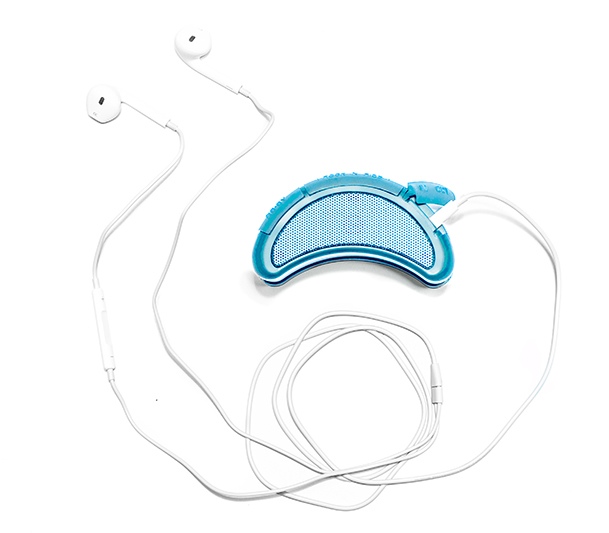 You can learn more about Hoofbeatz Audio and I Rock N Ride here.
If you are feeling generous or just want to purchase one of these awesome devices, you can pledge on I Rock N Ride’s Kickstarter campaign.