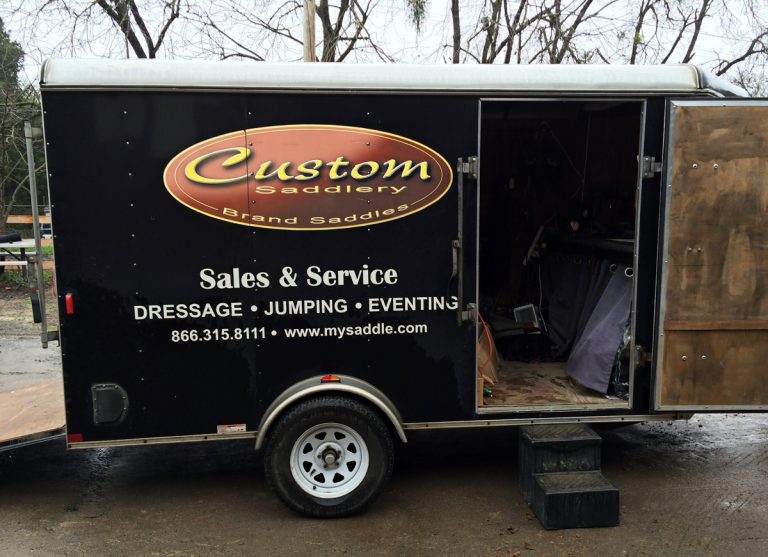 The day of my saddle fitting with Custom Saddlery finally arrived! 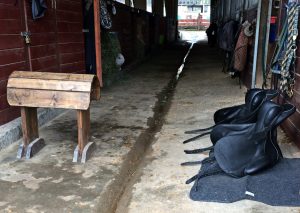 Things weren’t looking good with a steady rain falling on a cool and rather miserable day.  Robyn arrived pulling her Custom Saddlery trailer and opened it up to reveal a mixture between a mobile saddle shop and a repair shop.   There were dozens of saddles of various shapes, sizes and colors giving me an overwhelming amount of choices. 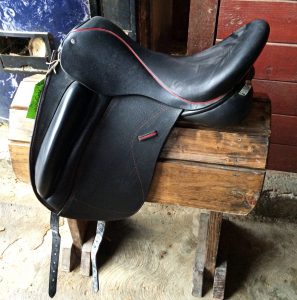 Robyn first took measurements of Champ’s back and then she measured me.  She disappeared into the depths of her trailer while I gathered together everything to ride Champ in.  Shortly after she brought out a parade of six different saddles.  She had me sit in each one on a saddle rack to see the suitability for my position and leg length.  Two were quickly eliminated. 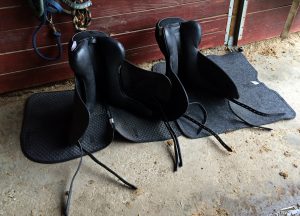 Next we put the saddles on Champ’s back and she did some quick adjustments.  Another saddle was eliminated.  This left three.

The three sitting there waiting for us to try was one of their most expensive models with silver piping, the next was a mid priced all black one that was looking promising, and a Wolfgang Solo with red piping and stitching was the last one.  My thoughts when I saw it were “Oh wow…that’s something.  I either love it…or I hate it.” 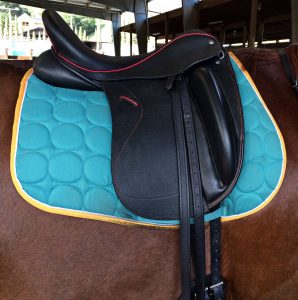 While it was the cheapest one available, it also happened to fit us both perfectly.  I hated the super expensive one with the silver piping (too deep!)…and the other one just felt so-so.  I felt good in the Solo and Champ was moving freely.

And while it was the cheapest…it was also $1,000 more than the model I had been looking at at Dover (which funny enough…wasn’t the off the rack Wolfgang Solo).  So much for the budget!

Robyn left and all was well with the world…or was it?