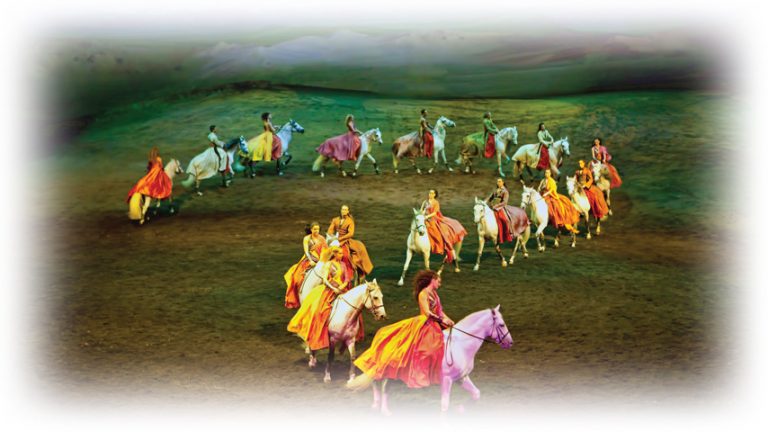 On Saturday night my closest 46 friends and I (or really…a large portion of the riders and students from the barn) went to see Cavalia Odysseo together in San Francisco.   This was not my first rodeo, having seen the original Cavalia 5 years ago (I cannot believe it has been that long).   I walked away from this show feeling just as impressed as I was in 2010.

These were some of the best performances of the night:  The work of art that was Les Anges was spectacular.  While the equine skills demonstrated as part of this particular scene weren’t quite as impactful (their acceptance of the flowing white silk rippling around them made it seem like it was no big deal), the visual of the performance was stunning.  I thought the manipulation of the set in Les Voyageurs was genius and it was quite a sight (and the horses were wonderful to watch and clearly enjoying themselves).  Fete du Village was a wild party indeed, with both humans and horses jumping like there was no tomorrow (those foot contraptions that the human athletes were wearing were something else…and the horses handled it like it was no big thing).   The L’Odyssee was impressive with 32 horses on stage in liberty (8 different 4 in hand teams) with a little humor thrown in as one of the horses decided he wanted to have nothing to do with his partners.  La Grande Adventure was as beautiful as anything ever could be with a very agile dressage horse featured (though it wasn’t’ the smoothest performance).

The trick riding was insane (yes…insane), the acrobats were ridiculous (in a truly impressive way), the music was wonderful and the horses were all reasonably well behaved with a couple of exceptions.

Would I go again?  Heck yeah!  I can’t wait until Cavalia 3!

Catch it while you can in San Francisco.

P.S.  It was REALLY hard for me to not take photos at this thing (but I of course respect the wishes of the event and understand not wanting to spoil the visual for those who haven’t seen it).