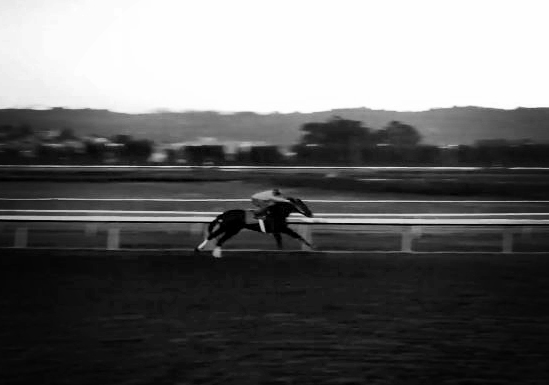 I wrapped up my ride on Champ for the day and halted next to two watching students.  I pulled out my phone to check the time.

It was like I had been punched in the gut.  An email notification popped up: “Shared Belief Dies…”

I slowly breathed in and said, “No…Shit.”

The teens looked up at me, concern on their faces.  “What’s wrong?  What happened?”  They know I don’t just throw around curse words for no reason.

“Shared Belief, the big racehorse that lives at Golden Gate Fields that I’ve told you about.  He’s dead.”

Their faces drop.  “What happened?”

I click through the link, not fully believing what I had seen.  Dead at age 4.  Colic at UC Davis.  Surgery couldn’t save him.

They’ve seen colic and one recently experienced losing a horse, so she understands.  Any of us that have lost a horse understand.  Working with horses can be the most rewarding experience and usually is.  But it can also be the most brutal and the most heartbreaking.  Having all of your hard work, your passion, your investment disappear in minutes.  Some days it just doesn’t seem worth it.

We walked back up the hill to take care of the horses that were still with us, as we always do.  There’s always work to do to clear the mind.

As the day went on I couldn’t help but think of how I’d missed out seeing him again.  A track trip was in the works for next week to see him with a fellow racehorse loving friend of mine.  She loves him too.

I have been lucky to be in the presence of this great horse several times.  I’ve seen him at Golden Gate Fields in the morning, watching him run like no other horse at that track has run in a long time.  Fast, agile and a bit freakish.  I saw his messy adventure in the Breeders Cup Classic from the rail last year, and loved him no less getting no luck.  I was never fortunate enough to see him at home in his stall (the Hollendorfer barn is notoriously hard to get into), but I was happy to see him when I could and when I did.

When Shared Belief worked, the backstretch at Golden Gate Fields came alive.  There are usually just a couple of people on the rail in the morning watching works, however one particular morning just before the Breeders Cup last fall…the rail was crowded.

Though he has been gone for many months in rehab, Shared Belief was a boon for Golden Gate Fields.  He was our hometown star.   And now he’s gone…just like that.

I wrote this last fall about Shared Belief:

The other lives and trains at a track who’s glory days are long behind it.  It’s been 64 years since Triple Crown winner Citation faced Noor in the Golden Gate Handicap.  It’s been 30 years since the great John Henry won that same race.  Silky Sullivan came to Golden Gate Fields in 1957 and stayed after death buried in the infield.  Lost in the Fog joined him there in 2006.  There have been many other graded stakes winners here over the years, but nothing of the storied greatness of years long past.  The track has been immortalized by the punk band Rancid in the song GGF and made an appearance in Jack Kerouac’s On the Road.  This track, a ghost of it’s former self, has come back to life with a little spark from a little horse named Shared Belief.

Now Shared Belief has joined those champions that graced our local track with their speed.  I like to think they run somewhere together now, trying to see which of them is the fastest and most courageous.