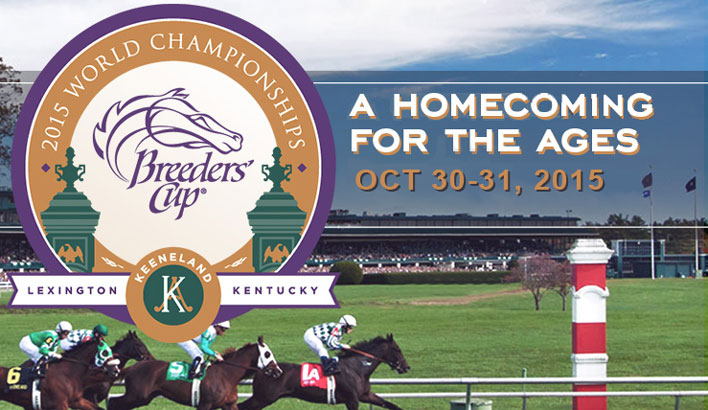 Tomorrow marks the first day of 2015’s Breeder’s Cup and the first year in many that I have not attended (as it’s not in California this year).  I’m pretty bummed out to miss such a fantastic edition of the Breeders Cup, however I have two more years in California to look forward to in 2016 and 2017.  This year was supposed to feature a showdown between American Pharoah and the best mare in the land…Beholder.  After Beholder’s scratch this morning the Classic lost quite a bit of intrigue, but there’s plenty left to be excited about.

The first is of course to see what next year’s 3 year olds will bring us.   Will we see a future Triple Crown winner (or even Derby winner)?  Will Rachel Alexandra’s filly Rachel’s Valentina tackle a very talented field and add another story to her mother’s legend or will Songbird prove to be the best?  The Juvenile Turf races don’t appear to have a Lady Eli in the group, so most likely we’ll see Euro’s win both and make little impact on the US racing scene for 2016.  Here are my selections for these races (I am limiting myself to two choices per race).

The “sprints” look to be pretty open ended this year (as they often do).  Especially the Filly and Mare Sprint, Turf Sprint, and Mile.  The Dirt Mile looks to be Liam’s Map for the taking (and I really would have rather seen him in the Classic…).  The field is classier than normal…but he still towers here.  For the Turf Sprint…I went with last year’s winner…and a horse I picked solely from his name.  The Filly and Mare Sprint has no major stand out and Judy the Beauty has been inconstant in 2015, I didn’t do much handicapping here and just went with my favorite two.  For the mile, I picked a talented Euro and the on-fire Tepin.  The Sprint will probably be the most interesting race of this group with a TON of speed up front.  Look for Wild Dude to pick up some of the pieces at the end and the plucky Runhappy to keep going (plus who wouldn’t cheer for a horse with such a great name).

The two turf races look to be ready for the taking for the big Euros: Secret Gesture (the should have been winner of the Beverly D) and Golden Horn (arguably the best horse in the world right now).  I also like Stephanie’s Kitten and she tends to surprise when I am least expecting it.  For the Turf my 2nd choices (and maybe first if it rains very much) are The Pizza Man and Twilight Eclipse.  Twilight Eclipse is a solid horse that spent last year getting his butt kicked repeatedly by Main Sequence.  The Pizza Man has been just short of perfect this year with his win in the Arlington Million and very close second in the Shadwell Turf.  He’s likely the best of the US.

The Distaff is the probably the most contentious race this year with many horses in with a shot.  I see I’m A Chatterbox, Stopchargingmaria, Stellar Wind, Curlina, Wedding Toast, Sheer Drama, and Got Lucky all as possible winners.  I’m going with the mystery horse (and Curlin filly) Stellar Wind and Stopchargingmaria.

The Classic lost much of it’s intrigue this morning with the scratch of Beholder.  Before the scratch…I saw several horses as possible winners of this race.  Now I only see one.  American Pharoah will win the Breeder’s Cup Classic.  If he doesn’t, I like Keen Ice.  Frosted is a great horse, but will never get by American Pharoah.  Gleneagles is intriguing and I think he could pick up a piece of it if he likes the track.  Smooth Roller might make a splash, but I don’t see him sticking around until the end.  I don’t see Tonalist repeating his form from the JCCG and expect a minor placing from him (4th or 5th).  I think Honor Code is a bit of a pretender here at this distance and expect him to finish with Tonalist.