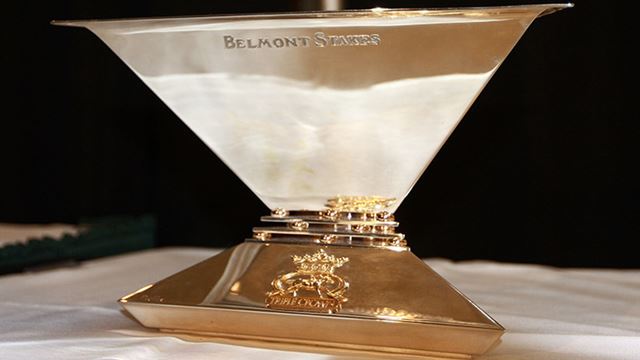 For so many of us, this is our first Triple Crown winner.  If you aren’t 45 or so…or maybe even closer to 50 or 55  you probably don’t remember the last time a horse won the Triple Crown.

This year I was not excited about much in racing.  I was not really enthusiastic about many of the horses and the Triple Crown was an afterthought.

This is after the intensity that was 2014.  February found me declaring to my friends that a California bred named California Chrome was my pick for the Kentucky Derby.  This was after a big Derby party in which I featured California Chrome’s silks front and center on a cake I made (Mint Julip cake…yum!).  After he won, I was elated.  After he won the Preakness, I made my plans to travel to New York for Belmont.  I would not miss his coronation.

Watching him in the paddock on Belmont day…I admit I was concerned.  He looked tired and not at all like himself.  After the break and the run to the first turn, I started groaning.  I knew it was over and started screaming at Espinosa for his riding tactics in the race.  After the race was over, the crowd turned away in silence and started filing out before the horses even made it back to the grandstand.  Another failed Triple Crown.  Another horse that wasn’t worthy.  Another heartbreak.

So this year, I just couldn’t find it in me to get excited.  Even as American Pharoah dominated the Oaklawn races (I always support Oaklawn winners…being from Arkansas).  Even as he bullied his way through the first Triple Crown races.  I would not let myself hope he could win and looked elsewhere for the winner…even though I desperately wanted a horse to win…so I could no longer care.   But the story didn’t start or end with Chrome.

The first Triple Crown attempts that I remember came all in a rush.  Silver Charm when I was 12, Real Quiet when I was 13 and Charistmatic when I was 14.  Anyone that ever was this age or has ever had a child this age knows how important these years are in the formation of an adult.  Because I was lucky enough to have a Triple Crown try for so many of my young years, to me it seemed just a matter of time before some horse would win.  Because of the intensity each year of this contest, the Triple Crown became this floating monster hanging over me.  Each year, I had disappointment.  Silver Charm…as my first…was a novelty.  It didn’t bother me so badly when he lost.  Real Quiet stung…since the winning margin was so small.  Charismatic was horrible, as he broke down as they crossed the wire at Belmont.  After three tries…the Triple Crown became an obsession for me.

Skip forward a few years to my 17th year and War Emblem…then my 18th in Funny Cide.  War Emblem was a gorgeous speedy horse, but my heart didn’t break for him.  Funny Cide was fairy-tail dream, and when he lost…we all did.

Smarty Jones almost broke me.  I distinctly remember being distraught over Smarty Jones’ loss in the Belmont and feeling like I was going to vomit as I saw Birdstone catching him stride by stride.  This was the horse that should have won the Crown.  I still believe that.

Next came Big Brown when I was 23.  I knew he was a champion from the moment I saw him and had him in the Derby…however he was a bit of a strange one.  I found myself hoping he would fail at Belmont.  I did not want him to win the Triple Crown.  His connections were not worthy.  When he came home last, all but pulled up…I couldn’t help but be thankful not to see that owner and trainer in the winner circle.

Then came the heartbreak of I’ll Have Another.  I did not support him going to the Derby, but after his Derby win…I was all for him the rest of the way through.  My fingernails were painted purple with his silk design.  I was jittery with excitement, knowing in my heart he would win the following day.  I was at the airport when I heard he was scratched from the Belmont and I could not believe it.  I cried and didn’t feel even a bit embarrassed.  I started to chip the polish off my nails to remove the visual reminder of another broken dream.

Then of course came California Chrome.

There were other horses…the horses that won two out of the three races, but weren’t going for the Crown.  Some of these were worthy…but for luck or other reasons…did not quite get there.  Tabasco Cat, Thunder Gulch, Point Given and Afleet Alex are the four I remember.  I am still sure that Afleet Alex and Point Given were worthy Triple Crown winners.

To me there are a few should-have-been Triple Crown winners and they get a special category in my mind.  Real Quiet, Point Given, Smarty Jones, Afleet Alex, I’ll Have Another and California Chrome each hold a special place.

This quest for greatness by 4 legged beasts and their handlers has been a personal trial.  The ups and downs.  The awe of great victory.  The crushing feeling of loss.  After California Chrome…I had given up.  I did not think American Pharoah was going to win, because I no longer believed that it was possible.   There had just been too many losses.

As American Pharoah started to turn for home with Mubtahijj and Frosted looking ready to pounce…my heart started to sink…just for the matter of a few strides.  Keen Ice was starting to pick it up and the others loomed, ready to take it to a tired front runner.  I cried out to my friends… “Look at Mubtahijj…he’s waiting for a hole and looks ready to go.  Oh and Frosted is kicking in.  Oh no!”  I was ready for American Pharoah to hit the wall that so many others had hit before.

By mid stretch I was screaming.  By the time he hit the wire tears were pouring from my eyes and I was shaking…as my friends yelled with joy and we all hugged each other.  I was stunned.  Even still, I waited for an inquiry.  For something.  Even a few days later, I wait for a drug positive to come to light…to watch the Crown be taken away.  I still cannot believe that it actually happened.

I also hate that it happened when I finally gave up…when I refused to allow myself to be enthusiastic about the horse.  When my most memorable pre-race quote was “I hope he wins it so I can stop caring.”

Horses are good at teaching lessons.

On to 2016…and another chance at a Triple Crown.