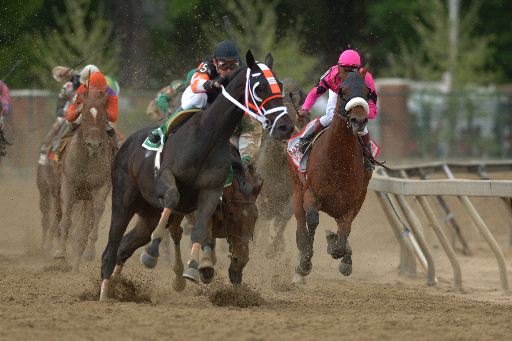 Ten years ago there was a quick little colt named Afleet Alex making a little noise in the 3 year old division.  He had at the point of the year been a good racehorse with glimmers of something much more.  His race record stood at 10/6/2/1.  He had been a promising two year old, winning the Stanford and Hopeful and coming in second in the Champagne and Breeders Cup Juvenile.

His three year old season had started with three starts at Oaklawn.  He started by winning the Mountain Valley Stakes.  He followed that up with the worst race of his life…a 6th(last) place finish in the Rebel.  He rebounded like a beast one month later in the Arkansas Derby and dominated the field.  Off of that win, he became my favorite to win the Derby.

Afleet Alex followed the Arkansas Derby up with a 3rd in the Kentucky Derby behind huge long shot Giacomo (after sitting close to very quick fractions).

This was the set up for one of the most impressive races (not to mention Triple Crown races) of all time.  If you do not remember what happened…I’ll give you a recap.  Afleet Alex was moving like a rocket off of the turn.  It was clear he was going to pass Scrappy T and run off and win by open lengths…then the unthinkable happened.  Scrappy T blew the turn and Afleet Alex clipped heels and almost went down to his knees (almost losing jockey Rose in the process).  Gasps went up from millions.  It was a tragedy occurring on national TV with the world watching.

Then something even more unthinkable happened.

Afleet Alex jumped right back up hardly losing a bit of momentum in a feat of athleticism rarely seen.  He gathered himself and started to roll again, flying past Scrappy T and still pulling away to win by open lengths.  I still cannot watch this race without getting chills.

Just three weeks after the Preakness, Afleet Alex finally showed his true promise in the Belmont, moving like a rocket again on the turn and bounding past Derby winner Giacomo in a matter of a couple of strides.  He pulled away to dominate the field by 7 lengths.  He ran the fastest final quarter of the Belmont Stakes since that race since 1969 (yes…that means his final quarter was quicker than Secretariat’s).

He never raced again after the Belmont.  He was diagnosed with a condylar fracture in July, was rehabbed for a few months and then diagnosed with a bad bone bruise causing necrosis in the bone tissue.  It is thought now that this bone bruise occurred in the Preakness incident and later caused the fracture.  He was retired to stud.  He was awarded the Eclipse for Top 3-year-old Male of 2005.

His Belmont performance started choruses of  “what if?”  What if the Derby had been run at a more reasonable pace?  What if Afleet Alex had sat further off that pace and made a run at the end?  There was not a doubt in anyone’s mind that he would have been the 13th Triple Crown winner.  Ten years later I remember this little colt, Afleet Alex and the feats of athleticism and class.  I will never forget you and I will be routing for your son Materiality in the Belmont in three and a half weeks.