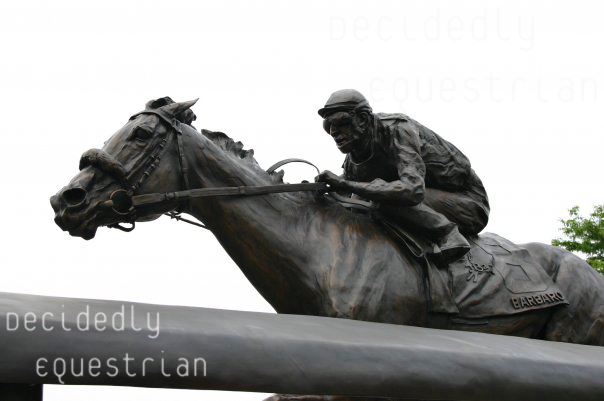 The Curse of The First Saturday In May

The First Saturday In May released in April of 2008.  This documentary follows six different trainers and their 3 year olds attempting to qualify for the 2006 Kentucky Derby.  These horses are now 12 years old in 2015, or would be if they had made it that long.  It is a very well done documentary and we suggest a watch for any of you that have not seen it.  You will laugh, smile and cry.

I recently saw an article with some disheartening news…the stallion Sharp Humor passed away.  This news brings me to the Curse. I fully admit to have “invented” this Curse.  However have a look at the following information and see what you think.

Not a great track record for the horses featured in this film is it?

The last horse featured may be the saddest tale of all.  Achilles of Troy did not start in the Derby.  He got hurt and taken off the Derby Trail during the filming of the documentary.  The story does not end or even start here.  This horse was owned by a man with a now infamous name: Ernie Paragallo.  If the name is not familiar to you, I’ll explain.  Mr. Paragallo was a thoroughbred owner that was convicted of 33 charges of animal cruelty for starving and neglecting horses at his New York farm.  There were 177 horses on that farm and 40 of them were in really bad shape.  All 177 showed signs of malnutrition.  Many of these horses were rehomed, but a few had to be euthanized due to their extremely poor condition.  This was all over the news.  Paragallo was also the half owner of the notoriously unsound (and unsound but fast producing) Unbridled’s Song (the sire of the ill fated Eight Belles).

The trainer of Achilles of Troy in the documentary Frank Amonte, Jr. lost his trainers license – testing positive for opiates –  after the Gotham and injury to Achilles of Troy.

The horse has disappeared.  He was given by Paragallo to a just opened breeding farm in Kentucky called Mid Life Crisis Thoroughbreds in 2010.  Achilles of Troy was listed then at a $1,000 stud fee, but has no produce record (he may have contributed to some sport horses, or he may have never been bred at all).  He’s no longer listed as standing stud anywhere.  The farm’s website is gone and it doesn’t appear that they are still open (however their phone number does still go to a voice mail for Mid Life Crisis Thoroughbreds and no one has responded to my phone call).  After research, calls and reaching out to people I have gotten no confirmation of this horse’s whereabouts.  I can only hope he was gelded and retrained as a riding horse, but there’s no way of knowing for sure unless one of the involved parties tells us.

The rest of the 2006 Derby class that was uninvolved in the documentary seems to have not done much better.

Was 2006 particularly unlucky or would I find similar fates for horses racing in the Derby in other years?  It’s hard to say without doing the research.  I do find it strange that 4 (and most likely 5) of the 6 horses featured in The First Saturday In May are gone now.  Is it a curse?  Or just bad luck?