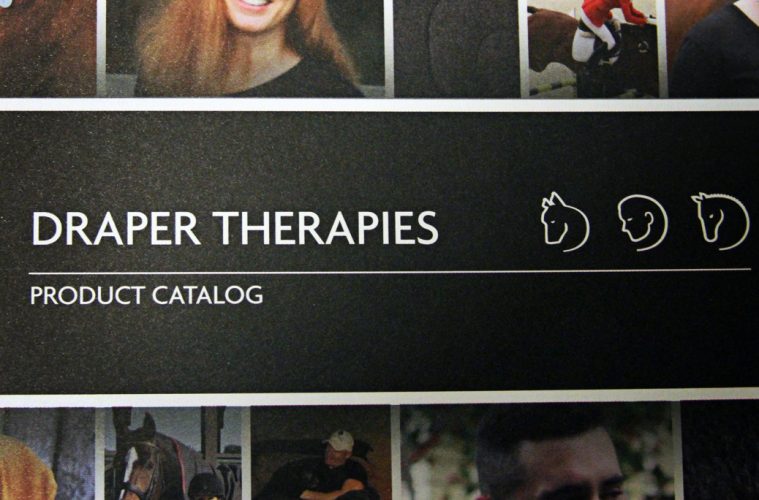 I first became familiar with Draper Therapies via A Horse Box.  There was an information book/catalog included in one of my first boxes which had a coupon attached for free shipping.  I have a few nagging injuries and arthritis and thought I would purchase a few products and try them out (and bought a few as a gift to a friend dealing with neuropathy due to chemo). 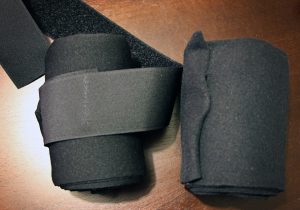 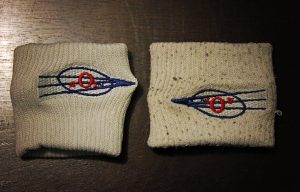 I ordered the wrist bands, the Body Wrap, and more wrist bands and socks as a gift.  On first impression I was impressed with quality of the body wrap.  The socks were fine too, nothing special, but nothing bad…just socks.  I was less enthusiastic about the wrist band because the color was an odd warm grey with a giant red, white and blue logo on it (not the Draper Therapies logo either, which is odd).  The wrist bands scream 80’s work-out video.  I’d be so much happier with them aesthetically if they were black and logo-less.

But looks aren’t everything and when trying to eliminate pain, I am willing to try almost everything.

I have tested the wrist bands heavily and the socks have seen much use as well.  As ugly as the wrist bands are, they work.  They work REALLY well.  I have become rather reliant on them to function day to day actually.  I use them every night when I sleep and most of the day when I am at home.  Because they are so unattractive, I do not wear them outside of the house most of the time.   Did I mention, these work?  They all but completely eliminate pain while I have them on and for some time afterwards.  Not wearing them for several days starts to show quickly by a return of pain and discomfort.  The other tester found some relief to her neuropathy from the wrist bands as well, but not as significant as the relief to our injury.

I have washed them several times and they are still working like a charm, however they are quite a bit more unattractive now due to the color showing everything and the knit starting to pill.  The way they look is really the only thing wrong with these (you can see in the photo above how they look after quite a bit of use).

The socks have been wonderful for my friend.  It has helped dim her pain and she wears them often.  They have held up to regular washing and have not lost their effectiveness.

I have had limited use of the body wrap for one significant reason, I can’t really figure out how to use it right.  I have problems applying it in a way that actually stays on (and I’m going to blame user error, and not the product for this fact).  I used it a few times and gave up after having it slip off time after time.  After receiving a second body wrap in my A Horse Box last month, I’ve decided to re-purpose these as polo wraps (since I have no problem applying them to a horse).  They have longer Velcro than the polo wraps, but that is easily trimmed.  The fabric is the same and they are the same length and width as the smaller ones they sell (90″).  The fabric is a soft fleece on the inside and a jersey knit type material on the outside.  Super comfortable stuff.  We have not used these enough to give any real review of these either way, but look forward to seeing some benefits.

I highly recommend Draper Therapies products to aid in pain reduction from injuries, neuropathy and arthritis.  I find these products work really well on humans and would assume they work equally well on horse and hound.  They are priced very reasonably and last a long time.  My only real issue with any of their products is the look of the wrist band.

You can visit Draper Therapies on Facebook or their website.  You can purchase their products in their online store.