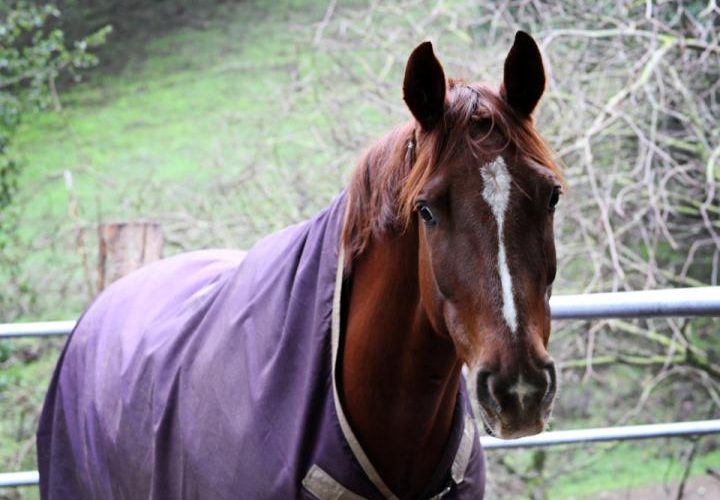 There are times in life when you find yourself starting over, even if you don’t want to.

November 2013 my trainer tried to push me into starting over.  My dearest 17 year old Titan was very ill, with no clear test results showing exactly what was the problem.  It was a mystery.  All that we knew is that he was uncomfortable, ill and also very lame.  I had been riding him for a few years and while he taught me a lot and I loved him greatly, I have to admit now that he limited any thoughts I might have towards showing and I did very little.  He was lame intermittently the entire time I knew him, and as he got a little older it kept getting worse.  He was the horse that I needed at the time, but he was only going to take me so far.

My trainer had tried several times to force the start over by throwing me on a nice warmblood she owns named Champ.  I had ridden him before – probably 100 times – but I’d never really took him seriously.  He is young, handsome and totally sound.  He had a lot of potential if I could put some effort into him to fix his issues and put aside my love of Titan.  I rode him halfheartedly for months several times a week.  Champ knew I was just going through the motions with him.

In April 2014, after a long fight with the mystery illness, colic and no signs of improvement in his pain and comfort level, I told my trainer I thought it was time.  She agreed and told me she had been waiting for me to make that decision for the last couple of months. Within days, the horse I loved so dearly was gone.

I had no choice but to start over, but in doing so I turned myself off.

Champ and I spent many months building a relationship that even began to look something like we might find each other acceptable, if not grudging partners.  I was sad and deadened by my loss of Titan and couldn’t give Champ more than stoic care and exercise.  He felt my apathy and returned with a “I could care less” attitude of his own.  I didn’t blame him.  We got along well enough.  We spent many hours on the trail, following our students and instructing them and he was a solid mount.  We spent a little time in the arena, but not a lot, despite the fact that I kept saying to my trainer and others that I was training him to show.  I really wasn’t doing the work I needed to to get us there.

I worked hard and successfully fixed a couple of bad habits he had picked up somewhere, but we didn’t have much of a relationship.  There were a few issues he had that I had not paid much mind to, as they were so subtle on the trail it never bothered me.  His biggest issue that I considered my own problem was cantering.  He would canter on the trail, but in the arena he would swish his tail, lay his ears back, and generally refuse the transition without great effort on the riders part to force him.  I assumed this was my fault and I was not cuing him clearly, but I wasn’t all that worried about it as I did so little arena work.  The little issues would come to rear their ugly heads soon enough.

By late October, something clicked.  I changed.  I am not “over” Titan, and I never will be.  However something let go.  I approached my trainer and looked at her and said, “I need your help.  I’d like to show Champ in some dressage shows next year.”  After a long conversation to make sure I was really going to dive into this, she agreed to take everyone off of him for 3 weeks, and she would ride him.  She promised when I got back from a trip, he’d be tuned up and ready to go.  She knew of his canter issues and his arena nervousness, but she was confident they would go away.  She rode him for me that day and called out all of his problems that needed fixing.

Two weeks later I got a call.  She said “You need to come and have a lesson with me about Champ before you get back on him.” We scheduled it for the week I got back and was ready for whatever was coming when I came back.

The first thing she said to me when I walked up with Champ tacked and ready was, “We have to start over from the beginning if you really want to do this.” My heart sank a little bit.  After an hour and a half of watching her ride and her watching me ride and instructing, it was clear to me that Champ needed work, and lots of time.  He’d gotten very confused in the last couple of years with several different riders and he had no idea what to expect.  He was nervous and sensitive, and anything but perfectly clear direction would make him revert to tension.  He needed to remember how to stay in the box and how to rely on it for direction.  We eliminated all extraneous riders except two of us keen on turning him around.  He was not allowed to trot or canter, go on the trail, and all lunging was eliminated.

We made a schedule and a plan for him and didn’t deviate from it.  For two months we did nothing but walking and halts.  We asked him to give to the bit and relax, without the added pressure of speed.  He became relaxed and happy and was ready to work most days.  He knew that every day he could expect free turn out for a while, then a good grooming, then a ride in the arena at a walk, and then back to his stall.  He got used to the routine and was happy.  We didn’t ask too much of him, just his attention and concentration in the brief riding sessions.

While this was happening I forced myself to bond with the horse.  To really allow myself to relax with him and play with him.  I sat and watched him in turn outs, I spent extra time grooming him and I made myself spend more time just in his stall, petting him or talking to him. By the end of two months, our relationship was much improved and I found myself actually liking him.  He is curious and goofy, but also kind.  He is nervous by nature, but will relax if you work hard enough to get him there.  After a month and a half, I had him laying his head in my chest falling asleep while I rubbed his face.

We’ve now moved into month 3, and it’s like starting over again…again.  We added trot work into our work plan and the tension came back, but not as great as before.  His tendency to lose focus and look around is even more heightened by the added speed.  However this time he’s mentally ready for the work and he knows what we are asking and what we expect from him.  While fighting us at times, he no longer looks nervous or worried or confused.  We are now asking more from him and he will have to learn to relax and look for the contact again at the trot before we move up to any canter work.  He will improve, but it will probably be another two months or more before he’s ready for anything harder than just a working trot in 20 meter circles.  That’s OK with me.

His cantering is better, though we’re not doing it regularly.  My trainer cantered him for us yesterday, and while he was not in perfect balance the ear pinning, tail swishing and irritation was gone.  Progress.

We still have a long way to go and our first few shows might be disasters, but we’re getting there.  If we have to start over again, we will do so.  I have learned a big lesson and that is that sometimes starting over from the beginning is the only way to move forward.