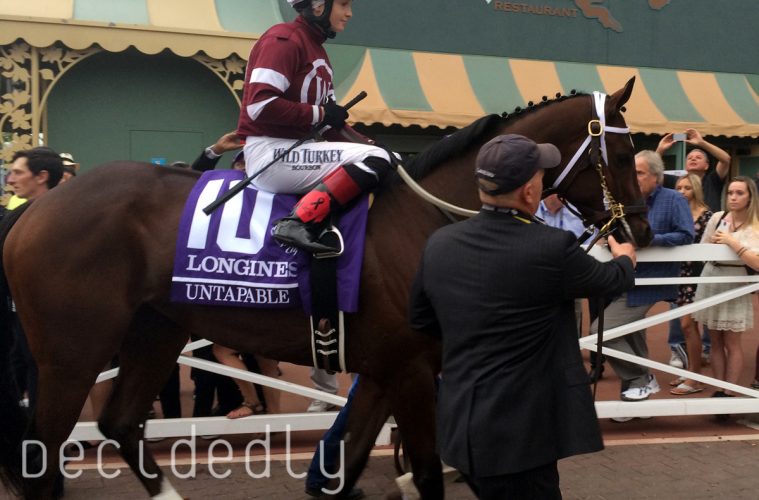 So today’s blog is a bit different.  With the Eclipse Awards just hours away, I thought it would be fun to tell you my choices and why.  For those that don’t know what the Eclipse Awards are…they are a group of awards given to US based race horses and their connections.  It’s the ultimate for many owners, breeders and trainers to win one of these awards.  This year, it’s just as controversial as ever with a much maligned Breeder’s Cup Classic winner Bayern, America’s favorite horse (with a less than stellar second half of the year) California Chrome, and a turf running horse unknown from all but real racing fans named Main Sequence vying for Horse of the Year.  That’s just one of the intriguing contests this year.  Her are our thoughts.

For Two Year Old Female we have Condo Commando, Lady Eli and Take Charge Brandi.  Condo Commando was the winner of the last race called by the legendary Tom Durkin.  She also won a Grade 1 and a Grade II.  Lady Eli is undefeated and topped her year in the Breeders Cup Juv. Filly Turf (very impressive) and would be the well deserved winner of this if not for the late blooming Take Charge Brandi.  Brandi has been a bulldozer since the Breeders Cup Juv. Filly.  I had her in that race as the winner (despite her going off at 61-1 odds).  She has been unbeatable since and ran twice more to score two more stakes wins since then.

My Choice:  This is a tough one for me, but Take Charge Brandi secured three stakes wins, which is more than the other two (we also love her).

My choice:  Hootenany (because he won on the big stage in both the US and the UK).

My Choice:  Dayatthespa for her 2 Grade 1 wins and impressive BC performance.

For Turf Male we have Main Sequence, Wise Dan and Karakontie.  Main Sequence was undefeated in 4 total races in 2014 (all in Grade 1 races). Wise Dan is Wise Dan.  Two Time Horse of the Year and an amazing Machine.  Wise Dan was also undefeated in 2014, but with only 3 Grade I’s and a Grade II.  He had his year cut short by colic surgery, came back, won a Grade 1 and then was injured and is recovering from that.  Karakontie gets a nomination…because someone has to take the 3rd place.  He won 1 race in the US (The Breeders Cup Mile).

My Choice: I would have to vote for Wise Dan.  Not only because he was the winner of this award the last two years…but he also managed to be undefeated and won three G1’s and 1 G2.  His races weren’t cherry picked for him like Main Sequences was.  His year was 4 starts because he coliced and needed surgery…and then was injured.  Wise Dan should be the Turf Male winner, but I would bet money that Main Sequence will get the nod.

For Female Sprinter we have Artemis Agrotera, Judy the Beauty, Sweet Reason.  Artemis Agrotera won 1 Grade 1 (the Ballerina) and a G2, but lost badly in the Breeders Cup Filly and Mare Sprint.  Judy the Beauty won the BC Filly and Mare Sprint after just losing the 2013 edition.  She also won 1 other G1 and 2 G3’s in 2014.  Sweet Reason won 2 Grade 1’s (the Acorn and Test), but her wins were in restricted company in 2014.

My Choice: Judy the Beauty.  She only lost one race in 2014 and was easily the winner in the BC F&M Sprint.

For Male Sprinter there’s Goldencents, Private Zone and Work All Week.  Goldencents racked up his second Breeders Cup Dirt Mile in 2014, 3 seconds in G1 races (including a game second to the horse we suspect is the best horse in the country…Palace Malice…in the Met Mile) and a G2 win.  He’s been consistent all year.  Private Zone only got going in September after a long time off and managed 2 Grade 1 wins in 4 starts for the year. Work All Week won 5 out of 6 starts in 2014 with one place.  He won the Breeders Cup Sprint and 1 Grade 3.  The rest were listed stakes or allowance.

My Choice:  This one is tough.  Work All Week faced weaker company all year, but won.  He beat Private Zone in head to head.  Goldencents has a slightly better stakes record than Work All Week, but only one G1 vs. Private Zone’s two.  For this one, I’m going with constancy throughout the year and a full calendar of challenging races and picking Goldencents.

For Older Female is a strange one this year with Close Hatches, Dayatthespa and Don’t Tell Sophia.  Close Hatches won 3 G1’s and a G2 before her total collapse at the end of the season (11th in the BC Distaff).  Dayatthespa won the Breeders Cup Filly and Mare Turf and another Grade 1 in 2014. Don’t Tell Sophia has 4 wins for 2014, but only one in a Graded Stakes (G1).  She lost to Close Hatches earlier in the year, but beat her in the BC Distaff (she came in 2nd to Close Hatches 11th).  She also has two places (1 G1 and 1 G2) and a 3rd in a G2.  She’s been very consistent.

My Choice:  While Don’t Tell Sophia has been consistent, she hasn’t quite had the brilliance of Close Hatches.  I’m a believer that if whatever started ailing Close Hatches at the end of the year hadn’t happened, she would have been a challenge for Untapable. So my choice is Close Hatches.

For Older Male we have Main Sequence, Palace Malice and Wise Dan.  We discussed both Main Sequence and Wise Dan already and both are undefeated for 2014 on turf with 7 G1 wins and 1 G2 win between them for the year.  Palace Malice had his year cut short by injury, retirement, and un-retirement after being purchased.  He won only 1 G1 (but it was an impressive one).  He pulled a hat trick by winning the G1 Met Mile this year after winning the 1 1/2 mile Belmont Stakes last year.  He also won 2 Grade 1’s and a G3 early in the year and lost the Whitney likely because he came out of it with a major injury.  He lost the last 5 months of the year and all chance at Horse Of The Year in recuperation.

My Choice:  Palace Malice is my winner in this category by default (though I LOVE this horse and think he’s the best dirt horse in the country).  I believe firmly that Older Male goes to Champion Older DIRT Male.  The turf horses have their own category already.

For Three Year Old Female we have Untapable.  Ok.  Well we also have Sweet Reason and Stopchargingmaria.  Sweet Reason we already discussed in Female Sprinter.  Stopchargingmaria had a solid year with 2 wins in G1’s and a G2.  Untapable was unbelievable.  The comparisons to Rachel Alexandra started early…but were abruptly halted after she finished up the track in her only start against males (Haskell). She won 6 out of 7 starts in 2014 with her only loss being the Haskell.  That includes 1 G3, 1 G2 and 4 G1’s including the BC Distaff and Kentucky Oaks.

My Choice: Untapable.  No need to even expound.  If she doesn’t get every vote I would be surprised.  This filly dominated the 3 year old fillies this year and dominated the older mares as well in the BC Distaff.

Three Year Old Male is a tricky mess this year with Bayern, California Chrome and Shared Belief.  Bayern was the winner of the Breeders Cup Classic (though a controversial one).  He won 6 out of 10 starts in 2014 with 2 G2’s and 2 G1s.  He beat California Chrome twice.  He lost to California Chrome once.  His two big losses of the year were DISMAL however (a 10th in the Travers and 9th in the Preakness).   This horse needs things to go his way on the front end to win.  When they do, he’s a monster.  Everyone knows who California Chrome is.  He won the Kentucky Derby and Preakness.  He won 6 of 9 starts in 2014 including 4 G1’s and 1 G2.  One of those G1’s was on turf. His three losses for the year were the good close closing 3rd in the Breeders Cup Classic, a 4th in the Belmont after a poor ride by the jockey and a foot injury, and a 6th in the Pen. Derby after a layoff from injury and not being tuned up.  Shared Belief almost finished the year undefeated.  He won 5 out of 6 races in 2014 with his only loss being a 4th in the Breeders Cup Classic.  He has 3 G1’s and 1 G2 wins (though the level of competition he won against was not as strong as the other two…he faced far fewer G1 winners than Chrome or Bayern).

My Choice:  California Chrome.  He has the most G1 wins.  He had a shot at the Triple Crown and didn’t fair terribly.  He just lost the Breeders Cup by a neck.  He won an equal number of races in 2014 as Bayern and 1 more than Shared Belief. He’s the most popular horse in the country.  He won a G1 on Turf as well as his Dirt scores.

For Horse of the Year: Bayern, California Chrome, Main Sequence.

My Choice: California Chrome – for the same reasons as above.  Main Sequence didn’t do enough as a turf horse to beat out a 4 time G1, Kentucky Derby, Preakness winning dirt horse.