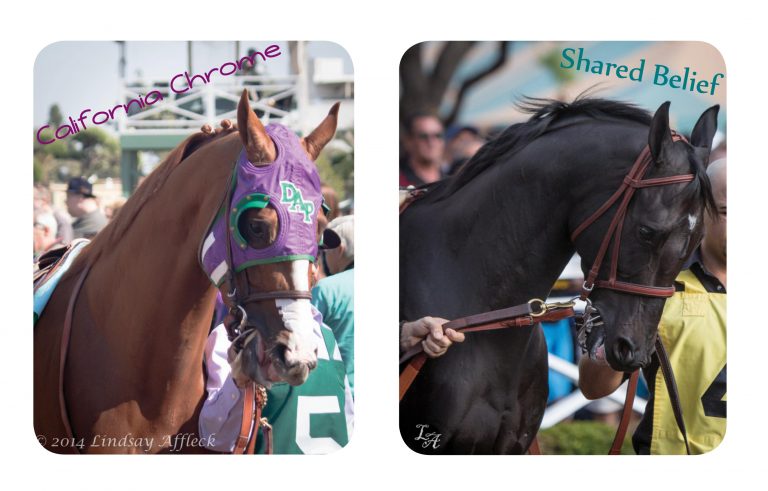 On Saturday is the match up of the year, and maybe the decade.  I am not sure if either will win or which horse will finish ahead of the other, but I am pretty sure it’s going to be a heck of a horse race.

I’m talking about Shared Belief and California Chrome in the Breeders Cup Classic.  These two California based horses will likely be the 1 and 2 choice in the field for the biggest race of their lives.

One lives and trains at Los Alamitos, a track not known for housing thoroughbred champions, much less thoroughbreds at all until very recently as a predominantly Quarter Horse track.  This track has long been known to be the end of the road for many Thoroughbreds in California until the closing of Hollywood Park last year and the shuffling of racing dates in Southern California changed all that.  Those changes along with the resident champion living on the grounds has jump-started this little track.

The other lives and trains at a track who’s glory days are long behind it.  It’s been 64 years since Triple Crown winner Citation faced Noor in the Golden Gate Handicap.  It’s been 30 years since the great John Henry won that same race.  Silky Sullivan came to Golden Gate Fields in 1957 and stayed after death. He’s buried in the infield.  Lost in the Fog joined him there in 2006.  There have been many other graded stakes winners here over the years, but nothing of the storied greatness of years long past.  The track has been immortalized by the punk band Rancid in the song GGF and made an appearance in Jack Kerouac’s On the Road.  This track, a ghost of it’s former self, has come back to life with a little spark from a little horse named Shared Belief.

Everyone knows California Chrome.  He’s the rags to riches story we spent our spring hearing about.  Out of an $8,000 mare by a $2,500 stallion, this California bred was not supposed to be great.  We all know how that turned out.  With wins in the King Glorious, Cal Cup Derby, San Felipe and Santa Anita Derby Chrome went into the Kentucky Derby as the favorite and dominated the field.  He turned around and won again in the Preakness two weeks later with ease.  He went into the Belmont on a 6 race win streak.  There were doubts about his ability to get the distance, handle the track, and how he would fair with his grueling campaign so far.   I don’t know if it was those things, the foot injury or something else that caused him to lose the Belmont.  He’d come so far and given us all a glimmer of hope for greatness.  He failed to live up to our expectations and was tarnished a bit in defeat.  A second loss in the Pennsylvania Derby continued to lower my hopes for this once all but unbeatable horse.  Going into the Breeders Cup Classic, this could-have-been Triple Crown winner comes into the race off two losses and had lost a little magic for his fans and the bettors.  He’ll go into the race no better than second choice.

I think the favorite will be last years Champion 2 Year old, the gelding Shared Belief.  He comes into the Breeders Cup Classic with zero losses.  Yup, that’s right…he’s never lost a race.  Granted, he’s only had 7.  Three of those have been Grade 1 races, and two were against older males (Pacific Classic and Awesome Again).  He’s also got two other graded stakes wins in that batch of 7.  Two of his races have come at Golden Gate Fields and two at Hollywood Park.  He’s raced once at Los Alamitos, Del Mar and Santa Anita.  See a theme?  This horse has never left California.  However, how do you knock an undefeated 3 year old that has beat older horses twice?  It’s hard.  Sure he’s tiny and doesn’t have great feet.  Sure he’s never raced out of California.  Sure he’s probably better on synthetics.  But how do you knock him?  Until he loses, he will always be the one to beat.

This has been the best year for California racing in quite some time and I do hope it continues with a victory by one of these two magnificent horses.

I cannot wait to see these two California Boys face off on Saturday and hope all the best for them.  I would love to see them storm down the stretch together and battle it out to the wire.  Is a dead heat too much to ask for?