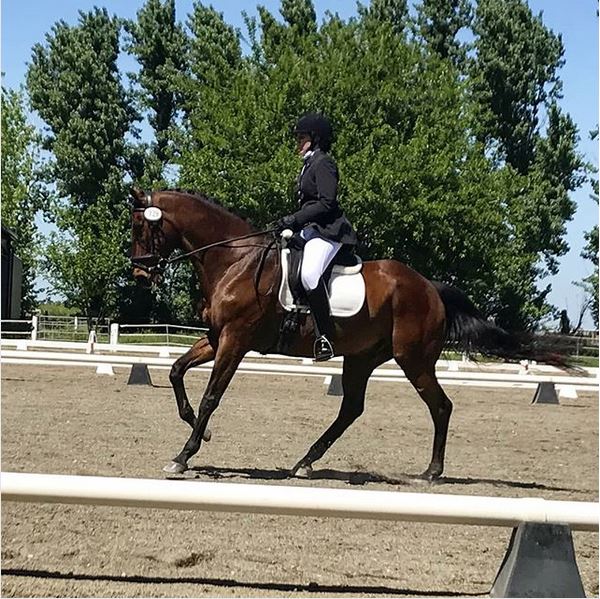 Showing – Why It’s a Mental Game

When you are an adult ammy…so much can get in your way on show day…nerves especially!  Perhaps you haven’t shown in a while.   Maybe it’s that you had a crazy couple of weeks and not enough time in the saddle to feel comfortable about your show.  Or possibly it’s because your making a big step up in your classes, going to a more important show, or you have big goals and bigger doubts.  What do all those have in common?  Each of those issues live in your head.  I recently had three obvious “slap me in the face” learning experiences recently that cleared some things up for me in the form of three weeks straight of shows.

Show 1 – was a multi day “derby” at a big name fancy warmblood breeding facility with several top professionals.  This show was filled with QUALITY…both in horse flesh and riders.  Talk about intimidating!

How did it go? 4 tests – 0 qualifying scores.  Not to mention a stressed and wild horse on day 1 and a stressed and exhausted horse and rider on day 2.

Show 2 – was at a local facility I show at often that is maybe a step below the previous weekend in quality, but the show is often full of professionals on nice horses and there’s always FEI classes running.

Show 3 – was at a less prestigious barn that only has 1 show a year.  The highest level showing was forth level (that would be me…).   Most of the people in the show were low level juniors and adult amateurs out there for experience and fun.

How did it go?  2 tests – 2 qualifying scores (including our highest score ever…and the horse’s highest score ever above training level).  This was on a tired horse saying “three shows in a row is too much mom.”

You see the problem?  Do you see how my view of each show set me up to fail…or succeed?  How would you have fared in similar shows? When we feel like we don’t belong, we ride like we don’t belong.  We set it up for ourselves in the warm up.  Show 1 was pretty much perfectly set up to psych a rider out…and who wouldn’t be when you saw some of the horses and riders in the warm up!  There was one well known rider on this huge stallion ripping around the arena like it was his…oh and it was his!  “It’s all yours Your Majesty” your brain says to that stallion…”I will just stay out of your way Glorious One.” Once you’ve conceded the warmup to your opponent, you might as well go home.

Walking out to your test, your thoughts then quickly become “lets just get through this and try not and embarrass ourselves.”  When that is what you’re thinking entering the ring, you’ve lost.  And your horse has lost because you have mentally thrown the white flag.  You go out into the arena and croak.

All I could think of (while Spice was bolting away from the judge) was “lets just get this done and get out of here.”  I rushed, stuffed up a bunch of things, and made course errors.  This proceeded to test #2, #3, and test #4.   And all because I was a tiny perfectly food sized little fish in an ocean of sharks (in my mind at least) and I gave it all up to that stallion before we even started. Show 2 feels more comfortable but after the week before you can’t help but feeling a bit small and beat up.  The warm up sure didn’t help.  You’re relegated to the “third arena”…which is the smallest and right by a busy road.  Between the road traffic, a really nasty FEI rider on a huge horse barreling at you regularly (and making nasty comments at you personally), and the struggle of finding room to ride you HAVE to fight off that give-up attitude.

I did not let myself give away the arena to that dominating FEI rider and took my space.  I asked my trainer to stop coaching me so I could relax and just feel/ride.  I did not give up in the warm up.  My first ride started like my rides at Show 1…and Spice had a temper tantrum…and then something clicked.  I got mad, said “you are not doing this to me again” and started riding.  When any stray thought that came into my head I yelled “shut up” at myself and rode on.  This led to two much better tests.  Learning!

After Shows 1 and 2, Show 3 sets you up for major success.   All of a sudden you are the shark!  You look around and you are warming up with children on ponies, and you realize you are that dominating rider trying to ride around the little fish.  When a trainer asks if we could split the arena so her kids could have an end to themselves, you said “No.  I am showing 4th level…and I’m the first ride of the day.  I need diagonals and long lines.  I will work around them.” She just has to deal with it.

Two weeks before there’s no way I would have stuck up for myself.  I went in the arena feeling like the queen of the show and put a big old exclamation point on that first test.  It was just awesome.  During our 2nd test, Spice said “nope, I’m tired,” and it was okay.  We made it through with a qualifying score anyways but it didn’t matter.  We had nothing to prove.  What an awesome feeling!

Next time you show…even if you are feeling like the littlest fish there… remind yourself that you are a shark.  You deserve to be there.  You worked hard.  You paid the same entry fees.  The warm up arena is there for YOU (and you don’t need to give it to the riders “better” than you.  You are awesome and your horse is fabulous and you are going to ride like you know you can!

What is your biggest show demon?  I’d love to know since I’ve shared mine with you!