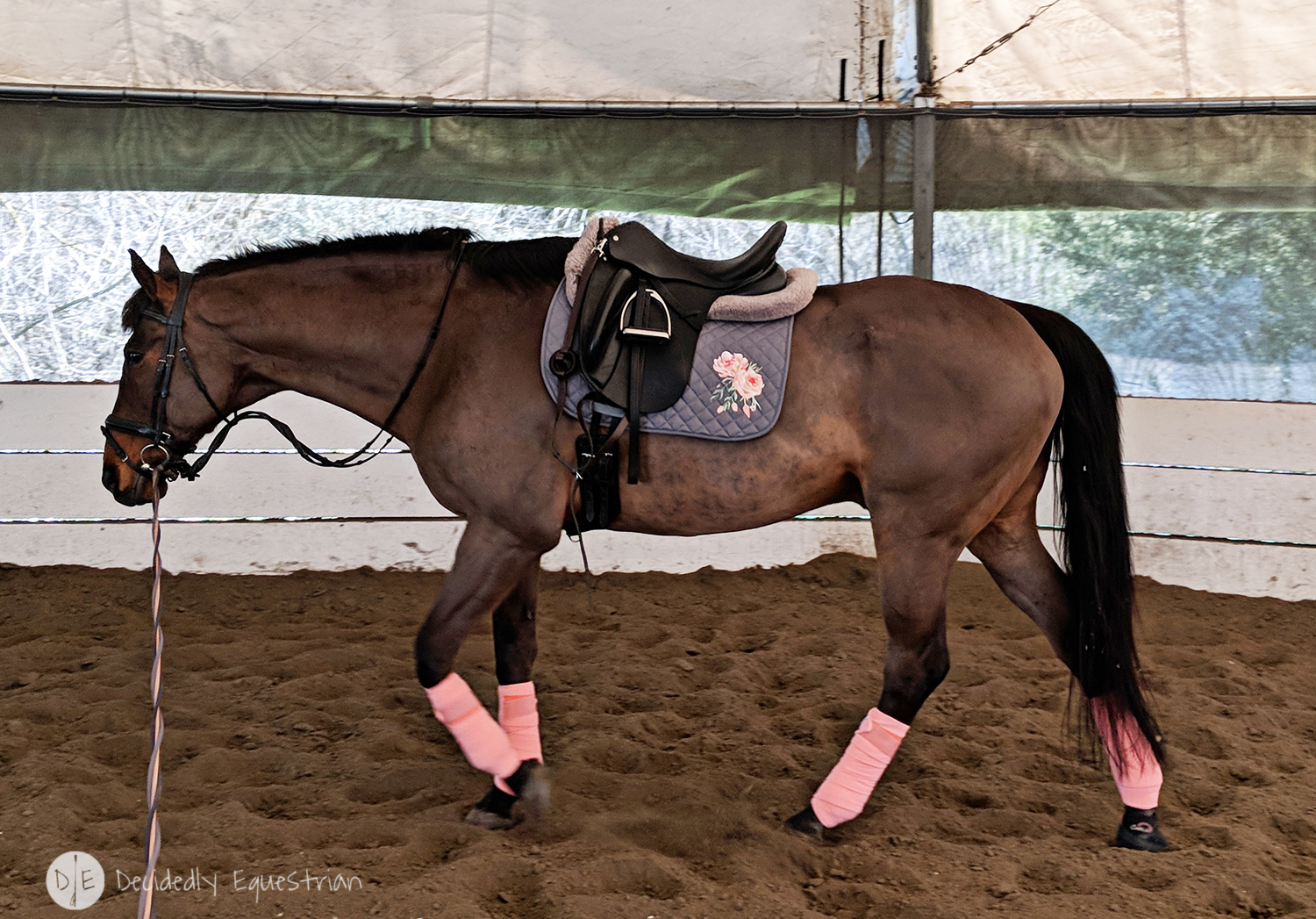 Alternative title:  Why the switch to polo wraps all of a sudden?

Some of you may have recently noticed the explosion of pretty polo wraps on Instagram and wondered…why the switch to polo wraps all of a sudden?  What happened to those gorgeous grey dressage boots?  Did I do it just for awesome Instagram photos?

I’ve been using boots on my horses for a while.  Titan wore sports medicine boots when he wore anything.  Champ wore dressage boots.  Spice has a couple sets of dressage boots.   They’re quick to use and easy to keep clean.  What’s not to love?  Polo wraps on the other hand take more time to apply correctly than boots, are more annoying to wash and even more annoying to roll and store.  Significantly more time consuming!  They are pretty cute however with tons of color options and lots of matchy-matchy potential without spending hundreds of dollars on lots of different sets of colorful boots.  My recent switch has not been for aesthetics however, though I have been enjoying the heck out of finding pretty polo wraps to match my pads.

Why then?  I have changed it up to help fix a problem Spice has.  He likes to tense up and have little melt downs from time to time (he’s an emotional guy) and has stepped on himself in the hind a number of times since I started riding him a year and a half ago.  I don’t have any photos of a fresh and bleeding wound to share, but here’s a photo of it scabbed over and starting to improve after a week of polo wrapping (it was significantly worse a week earlier).  There’s two little spots he’s grabbed himself.

When I have tried bell boots in the back, he acts like he’s been hobbled…or like he’s a Tennessee Walker that’s got stacks (and he won’t let up even after wearing them for an hour).  He does not like them and I can’t get him to concentrate on me with them on.  I found this boot sleeve contraption from Cavallo that’s basically a sock to go under hoof boots to prevent rubs.  I bought them to use as a barrier of sorts to help Spice from injuring himself in the hind.  He will tolerate these after a little dramatic walking for the first few steps.

The boot sleeves have worked fairly well to keep him from doing any additional scrapes, but I’ve noticed that the friction of the sleeve would rub the wound open at times (and I’ve gone through several pairs. When he does hit himself, it’s just neoprene…and it does tear holes as you can see in the photo below).  Without the boot sleeve, the dressage boots end up rubbing the wound open (or he’d step on himself again in his silly antics) and he’d end up bleeding again.  The wound just wouldn’t heal up despite my best efforts and lots of cleaning and medicating.

It occurred to me that polo wraps might be the answer to get this little wound healed up after a week of finding blood every day on multiple pair of dressage boots (different sizes, different brands…they all did it).  With polo wraps, there’s no chance of the friction from the wrap hitting the wound since it’s too low.  There’s no chance of them shifting around like the dressage boots.  There’s no rubbing of the polos on the hoof sleeve like there can be with the dressage boots if he’s knocked himself.  There’s nothing rough or hard to open the wound back up.

After a few weeks of polo wraps, the wound has continued to shrink and is actually healing up!  Hallelujah!  I’m not sure if this is going to be a permanent switch or not, but the polo wraps have certainly helped remedy this particular problem!  Spice also happens to look extremely stylish these days…so we’ll see!

Working with horses makes you a better problem solver.  Every horse is going to come up with something weird that doesn’t have a common solution.  It just takes a little experimentation…trial and error…to find the right answer.  It is lucky when it is such an easy (and pretty!) solution!