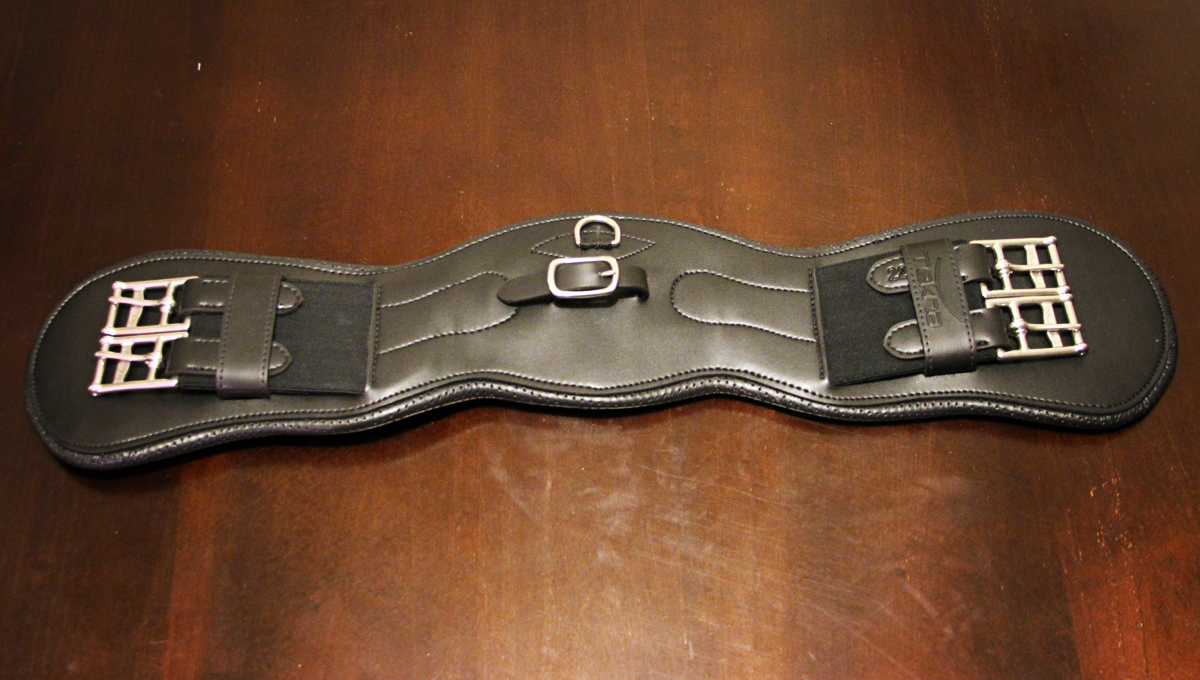 I think it’s clear to DE readers by now if you read many of my reviews…that Champ is a sensitive flower.  I haven’t told you everything (like how it took us going through about 40 different bits to find one he thought was acceptable)…but he is particular about what he wants touching him and a girth is no exception.  Champ likes neoprene and synthetic girths.  I am not going to go into detail on the issues other girths have caused in the past, I just will say that I needed a new dressage girth recently and I was having the hardest time finding a decent looking synthetic girth.  So many of them have big tags and logos…which are unsightly, are cheaply made, or are generally unattractive.

1.  Synthetic/Neoprene
2.  Looks nice enough to show with
3.  Has ring attachment for breast collar
4.  Ergonomically shaped
5.  Generously padded with elastic on both ends.

This magical girth described above was almost impossible to find.   Most synthetic girths do not look nice enough to show in and a large number of them are not ergonomically shaped.  To find one that included a breast collar attachment ring was the real tricky part.   There were a few possible candidates.  There’s one by Wintec with CAIR, but I’m not sold on that technology after using a CAIR saddle for a while.  There’s one by ThinLine, but I’ve heard that they have durability issues.  There’s a lovely one by Stubben, but it’s a little pricey for my pocketbook (it’s over $400).  That left us with the Tekna. I had not had much experience with this brand previously.  When I received the girth…I was impressed.  The girth is beautiful.  The padding is very thick, even if a bit stiff.  The materials all looked solid and the craftsmanship was better than I expected for such a reasonably priced girth.   The elastic is strong and will not wear out any decade soon.  The stainless steel roller buckles are a must.  It’s a lovely girth…and I can just hose it off when I need to!  What is better than that? It really shines when in use.  This girth looks attractive on the horse and gives plenty of elbow clearance (he previously had a straight girth and it caused some interference).   Because of the girth shape, he’s got a bit freer movement in the front (which is fabulous).  The perforated neoprene allows the girth to breath and so while Champ does get sweaty (which is good to keep the area lubed up under the neoprene) he’s not soaked like he is with a solid piece of neoprene after a hard bit of exercise.  He has not gotten any rubs from it and seems to be happy as a lark with his new girth (which is of course the most important thing).  It is a little stiff, but once warmed up it gets more flexible.

I think this girth is a steal!  If you’re looking for a synthetic girth, this might be the one for you.  It was the right one for Champ.

Update Spring 2017:  I sold this girth since it appears as if Champ’s dressage career is over for good.  It looked good as new when it left!  I sold it for the same price I bought it new.  Still impressed with it’s quality for a synthetic girth.